So Ill be working on a project to get high WAF on a project for under cabinet lighting. She doesnt want a switch, instead a button is required. I could have gone with a minimote or a care pendant…or pick something that isnt really ideal. Instead I just ordered a Satechi bluetooth button from Amazon (should arrive by Monday): 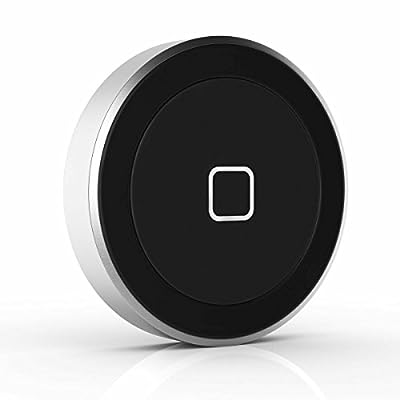 The Satechi BT Home Button puts Siri at your fingertips with a single press of a button, even if your phone is out of reach. Attach the button to your keychain, steering wheel, or dashboard to safely ...

My goal is to hook this up to an old Galaxy Note 2 that currently sits uncharged in my desk drawer, and build some tasker profiles/tasks to turn the cabinet LED lights on/off.

It acts as the “home” button. I havent played with Tasker in quite some time and Im sure I could stumble through making the “home button” function to talk to ST and activate the light.

Anyone with Tasker that is proficient enough to lay out the logic behind my thinking?

I understand that if the connection to the cloud is down, this wont work.

edited to remove IFTTT content based on @JDRoberts clarification

EDIT 2:
After deeper digging on buttons, I also found the iBolt button. Its configurable and has a version for both android and Apple.
heres a demo of the Android buttons configuration:

If you’re going to use tasker, you don’t need IFTTT. And IFTTT isn’t an open API, it’s up to each company with cloud service to provide a channel or not. If Satechi doesn’t already have an IFTTT channel, there’s no way to add one.

Have you looked at sharptools? That’s an android app that lets you connect tasker to SmartThings. Very popular in the community here. It might be all you need.

Thanks for the clarification on the IFTTT requirement. They dont have a channel, Ive checked.

I have downloaded Sharptools on my S6 Edge+ to play with it, but not on my Note 2. Ill be adding everything to that device once I can get it working.

So, taking IFTTT out of the equation, use sharptools and tasker to have the “home button” activate the light, right? Sounds simple (worst thing to say WRT tech). I may fiddle with it tonight without this device and see if that is feasible. Then see how this device integrates and adjust the tasker task/profile accordingly.

SharpTools is definitely the way to go.

The “Task” part is simple. Select Plugin, then SharpTools, then “A Thing”… select the switch/outlet you want to control and use the toggle command. That way the button press with just toggle the lights on or off depending on what state they are currently in.

The harder part here will be the profile… Looking at the button it looks like it just tries to go to the home page. I’m not sure if there is a built in tasker ability to see that and therefore perform the task.

Exactly. Getting the profile and task built based on a home button press will be the tough part.

I hope someone who has better knowledge of tasker can assist in that part.

Looks like the button can be made to launch the Voice Recognition app (based on the description), you may have to press and hold for that. If this works you can possibly trigger on launch of this Vloice Recognition App (this can be changed on Android) and use that toggle the light switch. Depending on how the BT connection is made you can possibly trigger on a new connection being made from that device (I’m assuming that this button will create a connection when the button is pressed and then disconnect immediately).
With Tasker there’s quite a few options to explore.

The button should perform whatever function your phone would normally do when you tap the home button from the home screen.

From reading the reviews and how it connects, it stays connected but after a lengthy time of inactivity, it disconnects. Tapping the button wakes it and re-establishes connection at this point.

Holding the button down will be a deal breaker for my wife.

I found this while perusing the interwebs:
https://groups.google.com/forum/#!searchin/tasker/tasker$20home$20button/tasker/OvoAb-72rXw/aWQn3iZDhsEJ

Im not sure how useful it is, being 2 years old.

I just placed an order for the iBolt button as well. That can actually be programmed to launch certain things based on the clicks.

We’ll see which one works best and return the other one.

Edit: This may be the button to go with!!!

This might be overkill, but I know someone hacked that Amazon Dash wifi button to do all sorts of things, rather than just order detergent from amazon or whatever they do.

You could go that route, with a cheap wifi solution that takes time to setup but is visually appealing and can be used for multiple things. The original post I saw required listening to the ARP probe when the button joined the network in order to get the MAC address, but that might have been simplified by now.

I would go with the new Iris Zigbee button over the DASH wifi button, if only for simplicity and battery life. The only problem is that right now you can only get it in a kit of devices, although it’s scheduled to start being sold individually at Lowe’s next month. The kit is scheduled for one of their black Friday deals.

Personally, I’m very happy with the Flic, which is a Bluetooth button that has an IFTTT channel. It has three states: press, long press, and double tap. Instant integration with smartthings via IFTTT. Feels rubbery, about the size of a US quarter but thicker, high quality. Perfect for under counter use. Only question is the lag. I’m getting about eight seconds delay through the IFTTT channel. That might be too much for some use cases. But the form factor is great.

That’s a reasonable option too.

The Dash is definitely a hack, but it’s also significantly cheaper by a factor of 5.

I like that the Flic is more purpose-built though. It just works out of the box and has a better support model

The issue with the Dash is that the battery is soldered in, so it’s not replaceable. It’s actually not clear that it’s cheaper over two years then the flic, where first of all the battery lasts much longer and secondly it’s just a screw cap and you can replace the battery. This is discussed in depth in the topic on how to use the dash.

So ive been able to set my home button to launch any app I want. Currently ive selected the calculator.

Ive setup a tasker profile to use the launch of the calculator to initiate the toggle of the lights. This works fine.

I’m having an issue with exiting the app after executing the light toggle. As it sits, I can only figure out a way to:
Click home, launch calc
Lights toggle state
Tasker task waits predetermined time before “go home” is initiated

What I want:
Home button launches very low memory app which triggers toggle of lights, wait x seconds, app is killed and phone returns to home screen (to wait for next command).

This is using nova launcher prime on galaxy note , unrooted.

Any assistance here IS MUCH appreciated as this would work with either of the buttons I’ve ordered.

The dash button is something I seriously looked at, but required too much work to be a reliable solution for my wife’s requirements. I’d hit it like a boss if it was for me, but I’m not afraid of Alexa, so ima use voice control.

So right now, without any button, ive figured out a tasker setup:
Create tasker profile that launches an app (im using calclator).
Create new task called whatever you want to control (cabinet lights for me)
Add a task to profile, use the plugin for sharptools
Select thing
Configure thing as needed. I used the z wave switch device type, then my cabinet lights for device to control, and set command to “toggle”

This will toggle the lights on any time the home button is pressed, assuming you have nova launcher and have setup the single click home button gesture to launch that app.

Next we want to “exit” said app after the toggle happens.
Create new profile the same as above, using the same app:
Click the “+” to add context, selecting "application"
Select same app as the previous profile
Create new task under that profile by clicking "+"
In the filter section at the bottom of the popup, type "go home"
Select “go home” then hit the back arrow on top left

That should do it. At this point, go to the home screen, hit the home button. The phone should launch the calc app, or whatever app you’re selecting, toggle whatever light you programmed, then exit to the phones home screen.

If a how to writeup is recommended, ll do it, but this should work with either button ive mentioned in this thread. Ill confirm once both are received.

They both work rather well. They do sleep so a single tap, then another tap a couple seconds later and lights come on!!

Very cool use for SharpTools, @Turb02! Thanks for sharing!

It would be really cool if the button could be used to directly trigger some other event other than simulating the Home button, but I’m glad you found a workaround that works for you!

@joshua_lyon watch the video for the ibolt button. Its capable of exactly that.

anybody had success with these (under $2) buttons?