Yeah, this did not help. I am having similar issues with some apps on my IDE not showing up to be installed.

Hi, Sorry its been a while but really busy at work and trying to fit everything in with Chronic Fatigue can give me amounts large downtime.

I’m waiting to see what happens going forward with Groovy and SmartThings before I do anything major but happy to look at supporting small bugs etc.

As for installing, I’ve reinstalled in on my phone using the above method and all works well.

Hello, I’m fairly new to this, so please bear with me.

I have a Hue dimmer successfully paired with SmartThings. I’ve setup ABC and have assigned a few buttons on said dimmer via ABC, but the button presses don’t do anything. When in the SmartThings app, my dimmer shows as being in Standby and I suspect this is the crux of my issue. Nothing I do seems to do brings the dimmer out of standby. Any ideas?

Have at least 6 Hue dimmers direct to ST. They all show as “Standby”. But do work via ABC regardless. One suggestion is to go to the Dimmer Device screen in the App and press the option menu, top right of screen, then “Settings”. There is one setting called Button Names - I have this enabled, or “True”. I believe this names each button sepatately rather than ON, OFF, Dim+ and Dim-.

I’m obviously doing something wrong, but not sure what. I tried the following today:

Unfortunately, nothing happens. The dimmer notification light doesn’t even come on reflecting a button press (maybe that doesn’t happen with this setup). The dimmer does show as “connected” in the app now,but based on your reply that may be irrelevant.

Is there further information I could provide that may help with troubleshooting?

@Brooklyn_Sid What brand are the lights that you want to control?

I have made a switch from DTH to Edge drivers for Hue Remote Dimmer and all my lights. There is Edge driver for Hue Dimmer, and I am using Mariano’s Zigbee Lights driver that has functions that completely replace ABC Manager, and more.
This are the links to treads where you can find links to the channels.

I made a Edge Driver for “Hue Dimmer Switch” [b95c17641bc945adb714a9b900a25f2f.jpeg] This is a simplified port of my previous DTH. [BETA] Hue Dimmer Switch DTH (No Hue bridge) rewritten - Devices & Integrations / Community Created Device Types - SmartThings Community You can install the driver to your SmartThings Hub with the Invitation link that I’ve created. https://api.smartthings.com/invitation-web/accept?id=e273df9d-10c3-4ead-a34a-0ad6c1040d57 Click Invitation Link → Enroll your ST hub → Goto Available Drivers → Install Hue Dimmer Switch driver → Pair your device Also, I uploaded the source code of the Edge Driver to my github, for anyone who are interested. Edge Driver is still in Beta. It could be unstable, especially with health check. This device don’t send periodic h…

You can get something like what you want really easy, for example increase light level by 10%

My setup very similar.
However, when I press abutton I do get a greenish led flash in upper left corner of button 1 (the on button “|”) and two flashes for a Hold.

PS On the device screen in the App the “Standby” changes briefly to “Pressed” on pressing any button.

This worked! Thank you so much.

I’m currently messing around with:
Bulbs - Hue, Yeelight and Lifx (I have some Wyze too, but haven’t installed them anywhere yet)
Plugs - wemo
Switches - Hue Dimmer, Lutron for Hue Aurora dimmer
Motion Sensor - Hue

I’m certainly open to suggestions for other brands. There seem to be so many that it’s a bit overwhelming along with a lot of garbage out there.

@Paul_Sheldon there is an issue with Edge devices, with button names. It is almost impossible to determine which device’s button is selected, because of how device and buttons are named under Edge drivers. See below, all buttons with just number are Edge devices, and those with device names are DTH

Thank you for the info. I shall look to see what info the Edge devices have. Can you confirm the device name of one of your devices and which device driver you are using,

@Paul_Sheldon this are button devices that I am using 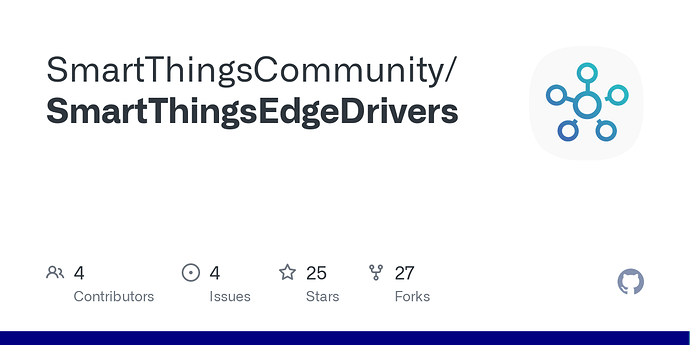 I made an Edge Driver for “Hue Motion Sensor” [31u0gojmGSS.AC] This is a port of the well known DTH by @bogdanalexe90 Hue motion sensor (use ST hub, but no hue bridge) - Devices & Integrations / Community Created Device Types - SmartThings Community ConfigureReporting values are adapted from the DTH. You can install the driver to your SmartThings Hub with the Invitation link that I’ve created. https://api.smartthings.com/invitation-web/accept?id=e273df9d-10c3-4ead-a34a-0ad6c1040d57 Click Invitation Link → Enroll your ST hub → Goto Available Drivers → Install Hue Dimmer Switch driver → Pair your device These two preferences are implemented in the Edge Driver: Temperature Offset : applied when next temperature packet is sent from the device. Motion Sensitivity : Low/Medium/High. d…

Sengled Dimmer Switch
SmartThings stock Edge driver
This driver expose remote as a dimmer switch, not as a button device, even that it is a button remote. Those buttons are not visible in ABC. It has On, Level Up, Level Down, and Off buttons. If you could add Those Dimmer Switch functions, that would be great.

Zooz Double Switch Dimmer
Edge driver created by @krlaframboise. You would need his invite to his channel

have you found any solution to new edge driver switches not showing up by name when you try to add automation to them? i readded three ikea switches and one dimmer and i have a lot of “Button 1, button 2” etc now in the list.

i noticed i can change the names of the buttons in the ide but im worried it would break something.

EDIT:
I tried renaming the child buttons for one dimmer and it worked when i used webcore to program a certain action (+15 level). But, ABC doesnt. When i choose the renamed button i get a new button menu where i have to choose which button within the button (1-40). It would seem that ABC isnt recoqnizing that its just ONE button and thinks of it as a switch with multiple buttons.

Are you doing something that could be accomplished with Routines or Rules instead?

You’ve taken the effort to put your device on an Edge driver, which gives you local processing and futureproofing. Now you’re setting up automations with a Groovy smartapp, which means you’re back to cloud processing and the threat of the Groovy end of life.

button devices that I am using

Hi I’m looking into the Edge drivers, now I have a few devices to test with. I’ll post an update in the next week or so.

I wish I could localize raising level but there isn’t any function for it AFAIK? I

Ah. Yeah, an incremental level adjustment definitely isn’t currently available in routines unless the driver for the device you’re dimming has that as a custom function that can be called.

It might be possible in rules - @nayelyz posted an example showing mirroring between two devices which is a similar level of complexity. I haven’t started messing around with rules yet to know for sure what’s possible though.

Hey guys, sorry to bother you, but I’ve been fighting this odd behavior for days now. I’m using HS-WD100+, HS-WD200+, as well as an odd HS-WS100+. All were working fine with a v2 hub, and ABC leveraging muti-tap controls. Now I started losing 1 of my WD and ended up replacing my hub to the Aeotec and starting over. However, can’t seem to figure out how to get passed the change of 8 to 1 button (with behavior or something). I can force the ST app on my iphone to “show” 8 buttons, but they all say the same thing, which is the last I picked. When I go in it has the right name though it’s missing the picture… and ultimately, whatever I configure to do it doesn’t… Anyone know what I’m doing wrong???

With the recent updates in ST and updates to Homeseer device handlers, I don’t need the ABC smartapp anymore. I can do it all with the standard automations (routines)–even changing the LEDs on the 200/300 series switches.