I am moving into a new home and need/would like input from the community on other ideas for making my home “smarter”/more efficient.

Ceiling fans. I have a lot and I am hoping that Hampton Bay comes out with their remote control for it this month.
Sound. Depending on how the M3 works/doesn’t work I can go from there.

I personally prefer the Schlage BE469 over the Kwikset locks. They have a higher security rating and some extra functionality. The Kwikset can be defeated in seconds, search on YouTube.

You didn’t mention anything about wall switches. It’s personal preference but I would go with wall switches over smart bulbs whenever possible for the added benefits.

How about some local button controllers? I use the Aeon Minimote because I got them on sale but there are others. I have one in the bedroom and another in the TV room to easy local control without pulling out the phone app.

And cameras, did you want any kind of security functions?

Thanks for the input! I do not see the added befefit of using a wall switch? Can you enlighten me? Thanks for the input on the Schlage vs Kwickset I will take your advise on the lock, scary what you can find on YouTube!
Button controllers? I could see how they are easier than pulling out the phone but I am thinking that “Alexa activate movie night” might be even easier then a button? I am planing on getting a Dot for the upstairs and the Echo can live down stairs…

With regards to Cameras, I am not sure the benefit either. I believe I would need to store the data locally or pay for a service. Second, since all this stuff is available online via the ST which is not bullet proof security wise I would have some privacy concerns if there were a hack/intrusion. Third, having video of the person robbing you is great for…I guess for the police to find them? Either way that’s what home insurance is for. Lastly, I am not moving into what I consider a bad area where I would expect security would be necessary.

I have procured some Go Control items for door control and motion sensors though, but I am thinking of more helpful tasks, such as using the motion sensor to monitor a hallway and turn on a light so person is not walking to the bathroom in the dark…

Thanks again for the input and suggestions they are great ones and please excuse my newbness.

Voice control is the primary way we control lights at our house. Everybody really likes it.

Regarding bulbs versus switches, different things work for different use cases and different people. You will find much passionate argument about this topic in the forums, from both sides. It’s helpful to start with the following thread:

I want to start connecting some recessed lights to smartthings…just curious what approach is better. Using a standard dimmer switch with connected lights or using a z wave switch and regular lights?

It will also be helpful to understand how the smartthings multi-protocol architecture works.

There is a Bluetooth radio which is not currently enabled, so we’ll ignore that.

There is an ethernet connection to your local network which is how the hub both talks to the Internet and talks to other local devices like a Phillips hue bridge.

And there is a Z wave controller. Zwave plus, actually, but the zwave standard is backwards compatible so it can talk to both Zwave plus devices and Zwave classic devices.

Both zigbee and Z wave are “mesh” protocols, which means they use a relay system so that devices pass messages from one to another down the line. Sort of like pony express riders. This is good, because it means that the hub doesn’t have to be in direct range of each of your devices. Instead, the hub can send out a message to a device in one room, which then relays it to device further away. This is called “repeating.” All good stuff.

However, zwave can only repeat for Z wave and zigbee can only repeat for Zigbee. And battery powered devices don’t repeat at all, because it would use up the battery. So your typical repeaters in a home automation set up are light switches, outlets, in wall relays, pocket sockets, and plug-in sensors. You basically want one of those for each protocol about every 60 feet for Z wave plus and about every 40 feet for Zigbee. (There are some architectural factors that can shorten the range like foil backed insulation, metallic wallpaper, cement walls and ceilings, brick, etc.)

Your gocontrol sensors and the Aeon Lab sensors are battery-powered zwave devices. Which is fine, they’re good devices. But your quirky devices, which so far seem to be your main non-battery devices, use zigbee. The quirky devices will be able to talk to each other, but they can’t repeat for the gocontrol sensors. So you run a real risk of orphaning your sensors out of range.

Kwikset makes both a Zigbee and a Zwave version of their lock, as do the better quality Schlage and Yale. Most people prefer the Zwave versions because then you don’t have to worry about Wi-Fi interference, but in that case, again, you need to have a Z wave repeating device if the lock is not in the same room with the hub.

So essentially you need to plan for repeaters as though you have two independent networks: one for zigBee and one for Zwave. That may impact your device selection. Iris by Lowes has a good line of inexpensive Zigbee sensors that work with ST if you want to go that direction. Otherwise you’re probably going to need to get some Z wave nonbattery devices.

Thank you very much JD for all your input. That is a great tutorial and you are right about most of my items being ZigBee vs Zwave. I will need to make sure I keep that in mind since most of what I have gotten so far is clearance Home Depot Wink items.

I forgot that ST hub has a Bluetooth in it. I will have to look into that even though its not activated… That would have been a GREAT solution to all of those requests out there for Ceiling fan control

but I am thinking that “Alexa activate movie night” might be even easier then a button? I am planing on getting a Dot for the upstairs and the Echo can live down stairs…

Ok, now you are making me jealous… ABSOLUTELY go the Amazon Echo route buddy! I am sending your post over to my wife so she knows I am not alone.

Wall switches are more reliable, especially compared to the GE bulbs. Seems like the more bulbs you add eventually there is a tipping point when the mesh is unreliable.

I have multiple can lights in my house and the switch was cheaper ($40) compared to buying bulbs (~$10-15 x 4-6 bulbs each switch). Rarely have an issue, and when I do I have to use my hand to turn it on (gag). While I like having a smart house, I still like having manual/traditional backup.

Other benefits include they act as a repeater for other zWave devices.They are native Device Handler, so you can use them offline with Smart Lighting.

While not “Smart House” I use this for my washer cutoff. It is not dependent on other sensors, Internet, power, smarthings. I still have a zWave leak detector hooked up so I would get an alert 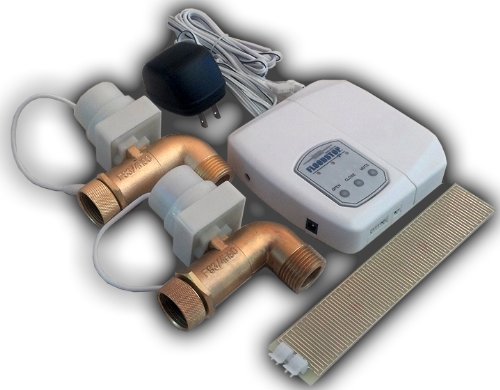 FloodStop is a Point Of Use leak detection and automatic water shut off system designed for commercial and residential dwellings Motorized valves are used to automatically shut off the water supply wh ...

I thought I would like voice control, but have been moving more to motion activated lights. Its actually to the point we expect it to work in every room, even though its not set up. Just got Wife approval to to the rest of the house.

So I would try a motion sensor (Lowes Iris is my fav) and do some motion activated lights.

We have a pet so motion unfortunately causes some problems. I am all for voice control and automation behind the scenes based on presence and time. With voice control you can group devices easily and e.g. tun off a whole floor, light a path for an activity or set a scene and coontrol more than just lights. I usually only use the app to check or troubleshoot. If there was no pet, I think a combination of voice and motion is the ideal solution so you can override the motion control if needed.

Other devices to impress the neighbors are the hue hub that lets you control your media devices and a couple of sonos or other cheaper DLNA speakers for voice notifications or to automate music around the house.

For security, you can also connect your hardwired smoke/CO2 detectors.

How do you connect the hardwired detectors? Those are required by State Law but CO2 is not so I have to get CO2 sensors but if I can wire my existing Smoke detectors… that’s a win!

I have given a lot more recent thought to the switch vs smart bulb debate and what I think makes most sense for my implementation is the have smart switches where available and anything plugged directly into the wall/always powered will get a smart bulb. The exception being the Kitchen and hallway since the hallway will be on a motion sensor and the kitchen voice control will work just fine for it.

I do have questions about DLNA speakers but will peruse the forums before asking questions and getting responses in this area for them. I purchased a M3 which will arrive eventually. Amazon seller sent the last one to Massachusetts…