I am renovating a short let rental property and have some pressing questions. I don’t want to go down an endless rabbit hole and spend more than needed to get a couple of things implemented.

I’m quite a newbie atm. I have an Echo, Voice Remote, Echo Dot Philips Hue lighting in 5 rooms (13 lights + motion sensor) and that’s it at the moment apart from some TP -Link smart plugs. I am considering purchasing a smarthings hub + door sensor.

I have just purchased 5 Samsung R1s for multiroom audio and was hoping to connect the Echo Dot to these via bluetooth so that a guest can use the voice remote from anywhere in the apartment and play music / control lighting etc.

The apartment currently has dumb light switches. I wonder if I can do the following with a smart things hub:

I’d really appreciate any tips and advice you may able to give to achieve the above. If i’d known about the hue lights reverting to default colours when switched off/on via dumb switches when i replaced the original white ones for black nickel switches - I would’ve just gotten blanking plates and hue switches.

I don’t have any Hues so I cant give you a definitive answer… but I think you cant change the default startup light/color. You can immediately change it to a different one right after they are turned on though using the WeCore SmartApp. https://wiki.webcore.co/ . There is a little bit of a learning curve to set this up but it is well worth it and documentation is great. You can use this forum thread for specific questions for your setup:

The easiest way to achieve (2) is to use the “Speaker Companion” app. You can find it in the phone app → Marketplace → SmartApps → Music & Sounds. Or you can just use the WebCore app I mentioned above.

Thanks so much for your pointers Pizzinini - I’ll definitely look into it but it may be a bit beyond me so hoping that I can find some knowledgeable peeps in the forum.

You’re right r.e. the hue bulbs - you can’t set a default colour for when they come on from being totally powered down (like you can with Lifx etc) which set me on my merry quest - but a workaround with webCoRe could do the job as you suggest - if I can figure out how to do it >.<.

Not sure if the above is doable OR

For 2) - Ill look into the speaker companion app

Learning how to use webcore is definitely worth it because once you know how to use it, it is super quick to set up all kind of stuff that usually takes complicated SmartApps.

I just remembered that there is a simpler app though if you have an iOS device. http://smartrulesapp.com/
It has a one time cost but setting up a rule to change the color temperature when the light is turned on literally takes 30 sec. I use it (in addition to Webcore) for many of my simple rules (e.g. Send a push notifications when a door is opened at night). 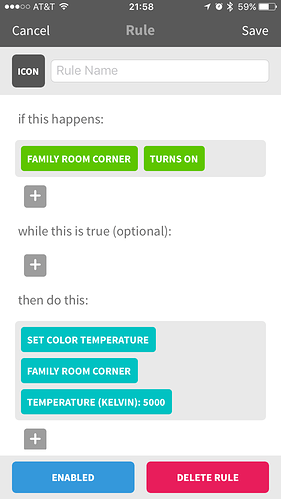 For your suggested Webcore rules, I suggest you try them out and actually see what they do.

Really struggling with this. Webcore seems to class physically switching off the light to be using the hue app or a hue switch NOT the dumb power switch. There’s no option for “reachable” or I think this would work: 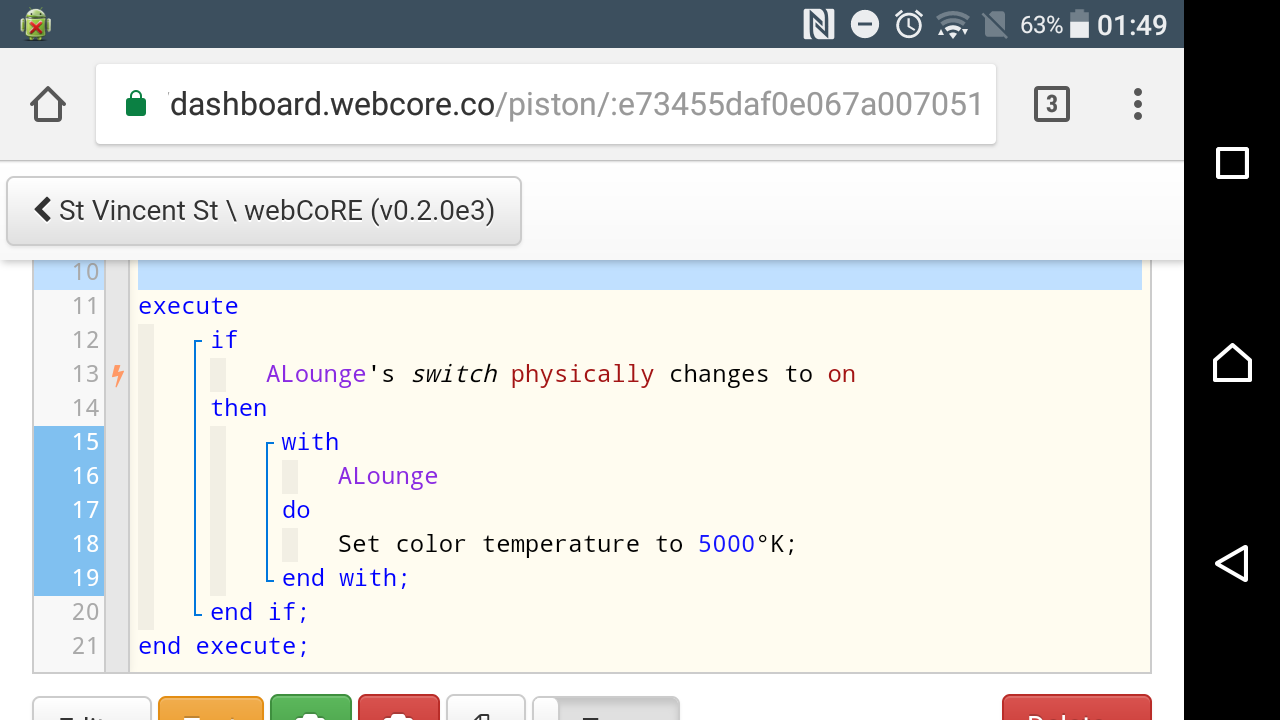 I know this is a sideways answer to your original question, but I just wanted to mention that Hue bulbs, like other bulbs which have radios in them, are designed to always have power. Not just because that way they can hear the next “on” command from the network but also because the inrush current when power is restored can, overtime, damage the radio and significantly shorten the life of these expensive bulbs. So they are not intended to be operated with regular light switches that cut current to them. It’s OK if there’s an occasional rare power outage, but if you are using dumb switches to turn these bulbs on and off on a regular basis, your expensive smart bulbs are going to become much more expensive.

Fortunately, there are multiple ways to address this issue, and they would also address the question that you had in your first post. By setting up a switch which doesn’t actually cut current to the bulb, you don’t lose your existing color settings.

See the following FAQ which discusses a number of different alternatives for this. (This is a clickable link)

ThsnksJDRobertd but this doesn’t actually answer or help with the question. The bulbs are occasionally switched off using regular switches. I want to have them change to cool white when the regular switch is put back on. That requires the “reachable” variable.

ThsnksJDRobertd but this doesn’t actually answer or help with the question. The bulbs are occasionally switched off using regular switches. I want to have them change to cool white when the regular switch is put back on. That requires the “reachable” variable.

My point is that if you change the switches to ones that don’t cut the current to the bulbs, you won’t have the color issue.

If you want to leave them on the dumb switches, you can, but the odds are good that you’re going to kill your bulbs much sooner than if you let the bulbs control their own current.

Read the user guide for the bulbs – – it tells you to keep the bulbs always on current, which means not using a dumb switch to turn them off.

Appreciate that however I’m looking for a workaround in the meantime as I can’t currently change all the dumb switches. While you’re right in that they should always have current, it still doesn’t help with coming up with a solution in the current scenario.

I’ve also now discovered a way to do this:

Whenever the dumb switch is switched off - this is where the above comes in. When the dumb switch is on the default philips hue light colour will change to whatever you set after a second when the hub sees the device has just become reachable. 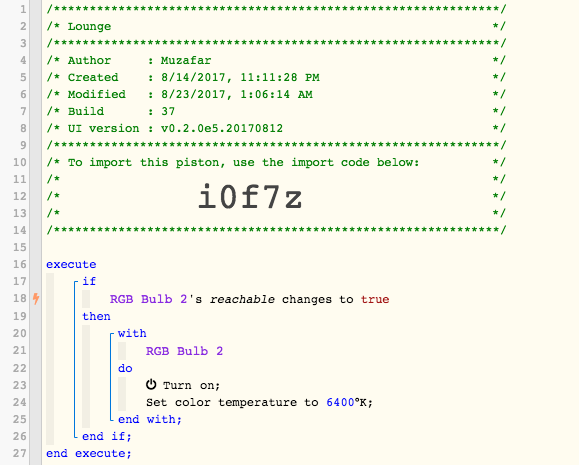