Has anyone seen a device type for the Magic Home wifi led controllers? They sell under a variety of names on Amazon but all seem to use Magic Home apps for iOS and Android. Here’s an example: 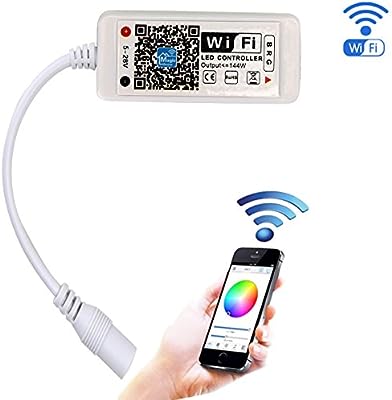 I have a couple of them and they work really well. They are also work with Alexa.

Writing a device type from scratch is well beyond my capabilities…

2020-05-27 - Update: The firmware listed in the thread is now (has been for a while) a “Universal” firmware that works with just about any ESP8266 based RGB/WW/CW controller. You just need to assign the proper pin numbers in the web interface of the device after you add it to the wifi network. Thanks to @cjcharles on the help on the firmware! Universal Firmware For detailed instructions on flashing and setup including video & photos, see post 360. 2017-02-15 - Update: I have added compatibility for a few new controllers that are sold under the Arilux brand. I’ve posted the specifics further in this post. 2017-01-23 - Update: I’ve added the ability to export and import programs. Scroll down for some program strings that can be copied and pasted into the SmartApp. 2017-01-21 - Update: I’…

At the top of the post, he mentioned adding Arilux.
If you scroll to the bottom of that post, you can see a picture of one that clearly has that Magic Home logo on it.

Has anyone seen a device type for the Magic Home wifi led controllers?

I just created one here:

Update 2017-09-30: I have now added support for RGBWW strips! This is verified with both 24V and 12V Strips as well! I bought a device that looked like a good deal to control my 24VDC RGB Strips (longer runs, still bright, and not as hot as 12VDC) in hopes that it would connect to SmartThings. When I later found that it didn’t and that the Alexa integration sends the username and password in plain text, I decided to make something to connect them. Due to a limitation in the SmartThings Platform, I am not able to send RAW Hex values to a device, so I also had to create a Man-in-the-Middle solution to translate commands out to the device that runs on another platform. Hopefully in the future this is fixed and I can output directly to the device. Until this is in place, I have only inte…

It is more for advanced users until SmartThings gives us the ability to send RAW Hex directly from the Hub, but an option does exist.