First off, I don’t want any of the “full” z wave switch kits so I’m trying to do this with the in wall add ons:

Neither are three way obviously. Here’s my thought for a solution but I can’t find the pieces to pull it off, any suggestions or alternative solution would be appreciated.

Remove switch B from the system resulting in switch A -> Aeotec -> light. Perfectly doable for my skill/wiring but leaves switch B useless. I’d love to put something behind switch B that would trigger a smart action to turn on the Aeotec behind switch A.

The only solution I can come up with: Buy an enerwave module ^^ and put it behind switch B but don’t actually hook it up to anything. It would be triggered by switch B and then add a smartapp that says “turn on Aeotec(switch A) if Enerwave(switch B) is turned on”. Should work but seems like a waste of a module. Is there anything out there made to do what I want more specifically?

Thanks in advance for any feedback!

I’m not sure what you mean when you say you don’t want a “full” Z wave switch, but if you’re in the US this is exactly how the gocontrol master and auxiliary are intended to work. The master is loadbearing, the auxiliary is not. Cost for the auxiliary is Usually $28, less than the cost of most in wall micros. And if you want, you can use the auxiliary by itself as in this particular brand the auxiliary is a Z wave device and will be recognized by SmartThings, which is not true of all brands. This is a very popular solution. 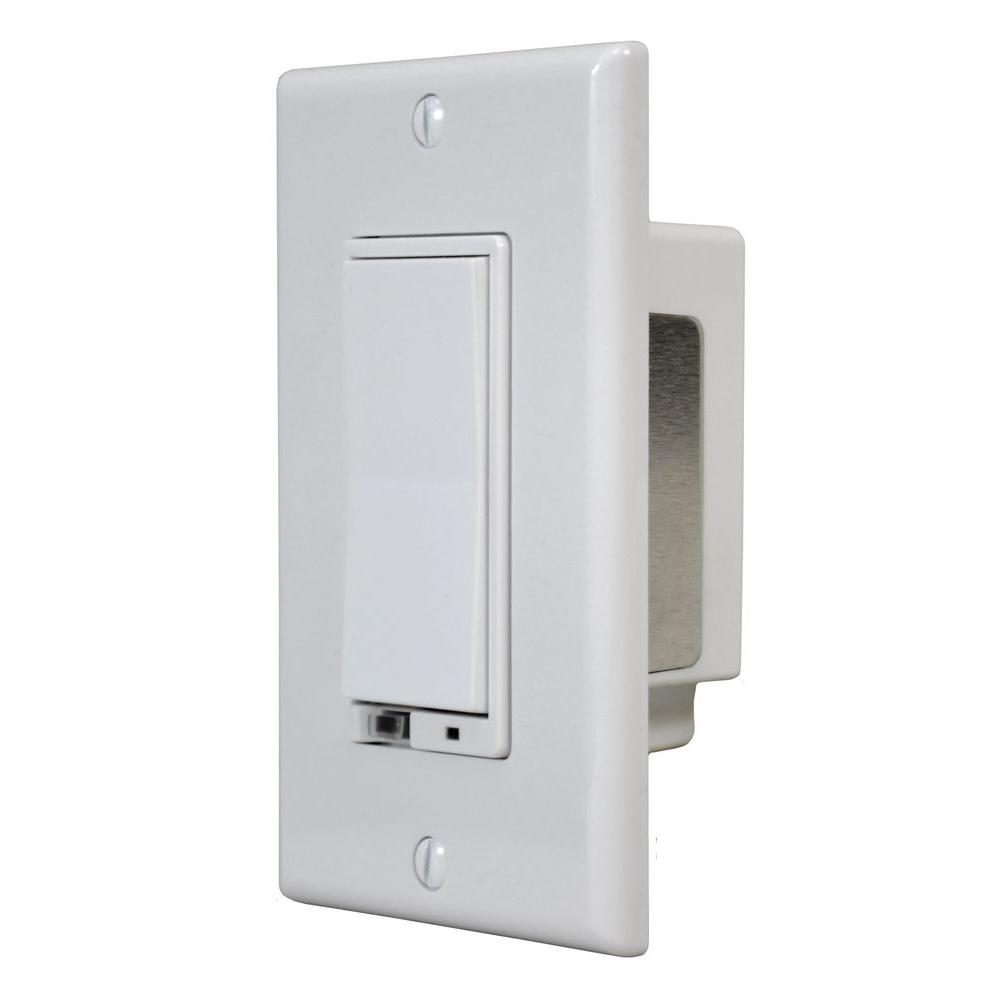 But if you really want to go with the micros, you can. In smartthings any switch/micro device can be set to follow any other switch, so it’s easy to do a virtual three-way. It wouldn’t be considered a hack, it’s a standard feature of the system. You can do it with the official smartlighting feature, for example.

All of that said, if the two switches are physically not too far from each other, you’re better off buying a micro that allows for two individual switches to attach to it. The Fibaro can do this, as can at least one of the Aeotec models. You put the micro at the ceiling fixture and then run the wires to each switch.

That way you only need to pay for one micro, not two, it will work even if your smartthings hub is not working, and you will reduce some of the lag.

Again, this is a standard feature of these particular devices, not a hack. It should be safe and to code as long as you are using one of the devices designed for use in a 3 way.

I know @anon36505037 has done this in several places in his home, as have other members.

Thanks for the reply. Looking back I’m not sure why I said “full”. I should have just said I don’t want to replace my switches(look/styling preference).

Anyways, I think I’m leaning towards getting a dual relay micro and also a single aeotec(for dimming capability). The dual will run a light I don’t need dimming and the virtual for the single.

To answer the core question here, there’s no product that can simply be a virtual switch/button triggered by a switch? That seems to be what I’ve gathered. You have to use a micro with nothing on the other end. Correct?

To answer the core question here, there’s no product that can simply be a virtual switch/button triggered by a switch? That seems to be what I’ve gathered. You have to use a micro with nothing on the other end. Correct?

I’m not quite following the question. What do you mean by “be a virtual switch/button triggered by a switch?”

If you are asking if you can toggle a conventional dumb switch and have it in some way send a signal to the smartthings hub, then the usual answer is a micro. You have to connect some radio to the dumb switch. But that’s a physical device, not a virtual one. You can’t use a virtual device to add radio capability to a dumb switch.

It’s possible to just use a networked contact sensor with dry contacts, but you absolutely should not put a battery operated device inside the wall. It’s a fire hazard.

Some people have created a button push device that sits on top of the wall using such a sensor, but it doesn’t sound like that’s what you want.

If you want to take an existing dumb switch and have it communicate to the smartthings hub, then, yes, connect it to an in wall micro. That’s the device class designed for this purpose, whether it controls an actual load or not.

If it doesn’t control the load, though, you have to know what you’re doing with the wiring.

And I know the following is not what you yourself are looking for, but since there may be other people in the forums to come across this thread looking for something a bit different, here’s the list of buttons and remotes that work with SmartThings. Some of them look just like wall switches. But I do understand that you yourself don’t want to replace your existing wall switch.

I’m not quite following the question. What do you mean by “be a virtual switch/button triggered by a switch?”

If you are asking if you can toggle a conventional dumb switch and have it in some way send a signal to the smartthings hub, then the usual answer is a micro.

That’s exactly it. Since a micro is meant to do more than just send s signal to a hub I was hoping that maybe there was essentially a smaller/cheaper micro that only sent a signal to the hub and didn’t have the capability to directly control a circuit.

Thanks for the quick replies and getting me up to speed on the options. I got my hub a while ago but I’m just getting into the lighting capabilities.

That’s exactly it. Since a micro is meant to do more than just send s signal to a hub I was hoping that maybe there was essentially a smaller/cheaper micro that only sent a signal to the hub and didn’t have the capability to directly control a circuit.

Not cheaper for use inside a wall. There’s just not much of a market for that except for ones to handle adding a radio to HVAC equipment, and those are more expensive than the regular micros.

Lots of cheaper battery operated options but again, not for use inside a wall.

Most people would just use the gocontrol auxiliary switch. It looks like a light switch, it costs less than $30, and it’s designed to be wired without controlling the load, which makes it simple for DIY people. UL listed, widely available from places like Home Depot.

Again, I know you don’t want to change out your switch, I’m just trying to explain why there’s no market demand for what you’re describing.

Have you considered the Fibaro dimmer 2? You can use S1 for the light you want to control (disable the dimming parameter for on / off mode but have the dimming option for possible future use). S2 on the same module cannot control a load, it just sends scene ID’s to the hub which can be used to control other things (single, double and tripple press + held do its can control up to 4 things on S2)

Ooh, thanks for the heads up on that dimmer. It will be useful for sure!