Or turn off the lights etc. HomeKit is already baked into iOS 8. Pretty interesting.

Or turn off the lights etc. HomeKit is already baked into iOS 8. Pretty interesting.

HomeKit Is announced by Apple, but there’s nothing available to actually buy yet, so it’s hard to tell exactly how it will work. Or if it will work with SmartThings. My personal guess is that it will be summer 2016 before there are enough available devices to really judge it.

Meanwhile there are some other voice control options available that work with varying success. I’m quadriparetic, so I follow most of the voice control discussions pretty closely.

Many forum users are using SharpTools, developed by a community member here, but it only works with android. @joshua_lyon can tell you more about that.

Others are using Ubi, a standalone device a little like Amazon’s Echo, but it doesn’t seem to work for everyone. Ivee is another similar device, but seems to have the least accurate speech recognition.

Samsung’s Gear S watch will let you change the Mode for your SmartThings home with voice, but that’s all so far. Hopefully more will come in the future.

One community member has figured out how to have Siri send a text message to SmartThings without using IFTTT. Very clever! Just a few potential issues. IFTTT can have delays of 15 minutes or more (see their FAQ, nothing to do with ST, just how IFTTT works). That’s a long time to wait for a light to come on.

Hi All - see the below instructions for executing simple SmartThings commands using Siri. The solution involves sending a text to an IFTTT phone number which acts as a trigger to turn on or off devices via SmartThings. You can setup a contact called 'home' and then send a message to 'home' (use command 'Tell Home') with the proper tag to trigger the event. I'd love feedback on the approach. I would rather use more natural language like 'Tell Home to turn on the kitchen lights' rather than 'Tell home hashtag kitchen underscore lights'. Regardless, the approach below executes simple ST actions with use of Siri alone, which is pretty cool. BASIC SETUP 1. Setup an IFTTT account 2. Add the Smarthings channel to IFTTT - make sure to provide access to any devices that you want to contro…

For heavy duty makers, there are options with Raspberry Pi.

So…no HomeKit yet for anyone and maybe none ever for ST.

You can find a lot of current discussion in the following topic:

Hey everyone, I am sure many of you have heard of Ivee (helloivee.com). I personally don't own one, but it did make me do some thinking. For them to achieve integration with SmartThings, it would appear they have to communicate with the SmartThings cloud. Is this correct? Have we heard of any way to do this officially as of yet? Here is where I am going with this...: My dream would be to put 5+ Raspberry Pi's in my house, with a good bi-directional mic, and a wifi dongle. Toss on a simple "always listening app" and basically build a voice recognition app using one of the many cloud-based voice recognition api's. I look at the products like Ivee, and in some ways I feel that they are too ambitious with trying to integrate into 100 solutions, they are trying to do too much with having…

Many people want voice control, we all know it’s coming, we just don’t know exactly how or when. And for some people, it’s here already, it just depends on your particular needs.

I’m pretty sure you can write code now that would cause HomeKit to work with ST. But, such an app might not be publishable in the App Store (I don’t have a clue about restrictions Apple might place on HomeKit apps). HomeKit is an API, and it exists now in iOS8. So one can write iOS8 apps that call that API. I’m pretty sure some people have done that already. I’m not too keen on diving into iOS8 app writing (again), but I suspect others might be.

I’d be very surprised, HomeKit relies on firmware (or at least a secret handshake) in the receiving device as a security factor. It’s not just an API into the sending device.

So essentially right now HomeKit features aren’t available because no receiving devices have come to market yet. Just a few taking preorders.

So some voice control via iOS may be possible like the
IFTTT option above, but not HomeKit.

I’m not talking about HomeKit devices, but ST hub as a bridge. There are people implementing HomeKit bridges on things like Raspberry Pi, which certainly are not MFI certified. I can’t find any reference that suggests the API enforces a secret handshake with a bridge. Another group implemented a bridge using a Mac. Even @Ben indicated that there is no reason that hub v1 couldn’t be MFI certified (it’s not).

But, the effort to implement something like this is huge, and if it can’t be published in the App Store then it’s hard to justify the effort. Look at this GitHub project: https://github.com/KhaosT/HomeKitBridge. If you drill into that code you would find a huge project, enough to make me tired to think about it.

Thanks for the mention, @JDRoberts. As you noted in your comment, SharpTools can be used to setup voice commands with Android devices. (eg. “OK Google, Turn the bedside lamp on”) There’s a good example of this in my voice control tutorials and some discussion on it in the last thread you linked to.

I am interested to see what comes of voice control on iOS (including HomeKit). The IFTTT hashtag hack is interesting and I love that kind of ingenuity, but I couldn’t see myself actually using such convoluted voice commands.

I just thought it was pretty interesting that Siri is already integrated with HomeKit in some way i.e. looking for connected devices.

I think it’s still a bit confusing as to how HomeKit will work. I know that new hardware will need to have the MFi chip to be directly controlled via Siri but I believe there will be a bridge that will sit in between Siri and non-MFi devices. There’s also talk that AppleTV will be involved, in particular for controling Siri remotely when you are not on the same network.

I just thought it was pretty interesting that Siri is already integrated with HomeKit in some way i.e. looking for connected devices.

I think it’s still a bit confusing as to how HomeKit will work. I know that new hardware will need to have the MFi chip to be directly controlled via Siri but I believe there will be a bridge that will sit in between Siri and non-MFi devices. There’s also talk that AppleTV will be involved, in particular for controling Siri remotely when you are not on the same network.

There’s quite a bit of information available to Apple developers, but it’s under nondisclosure.

What’s been publicly reported so far is that Siri under iOS can use HomeKit to talk directly to HomeKit certified end devices like a smart switch, with no bridge or Hub required. But that is one device at a time, no scenes, and you have to be within BLE range of the device, likely around 15 feet. There’s an IP option also if both Siri and the end device are on the same Wifi network.

You do have a type of limited option scene without a bridge called “Action Sets” but you have to choose from phrases and concepts Siri understands, you can’t add as much custom stuff as the original bloggers thought.

Hubs and bridges are allowed, but no one’s quite sure how they’ll work yet and they WON’T work the way a lot of bloggers were guessing last year. There will be some ability for a bridge to pass along a Siri request to a non MFI device, but it’s limited. There’s a big security component, somewhat similar to ApplePay. So for example part of the 2015 public announcements was that Homekit doorlocks will not accept commands from bridges. And that each bridge has to have fewer than 101 end devices that are controllable via HomeKit.

HomeKit maintains one big database of device status for all the controllable devices, available to all of them, but it’s definitely limiting what can be stored in that database. Looks like enforced device types and capabilities.

Apple has set its sights on the smart home, and HomeKit is how it plans to dominate it, promising a more cohesive automation experience by becoming the glue that holds everything together. HomeKit …

And, yes, Apple TV will be the trusted device when your iPhone is away from home. That’s why there’s more to this than just an API. 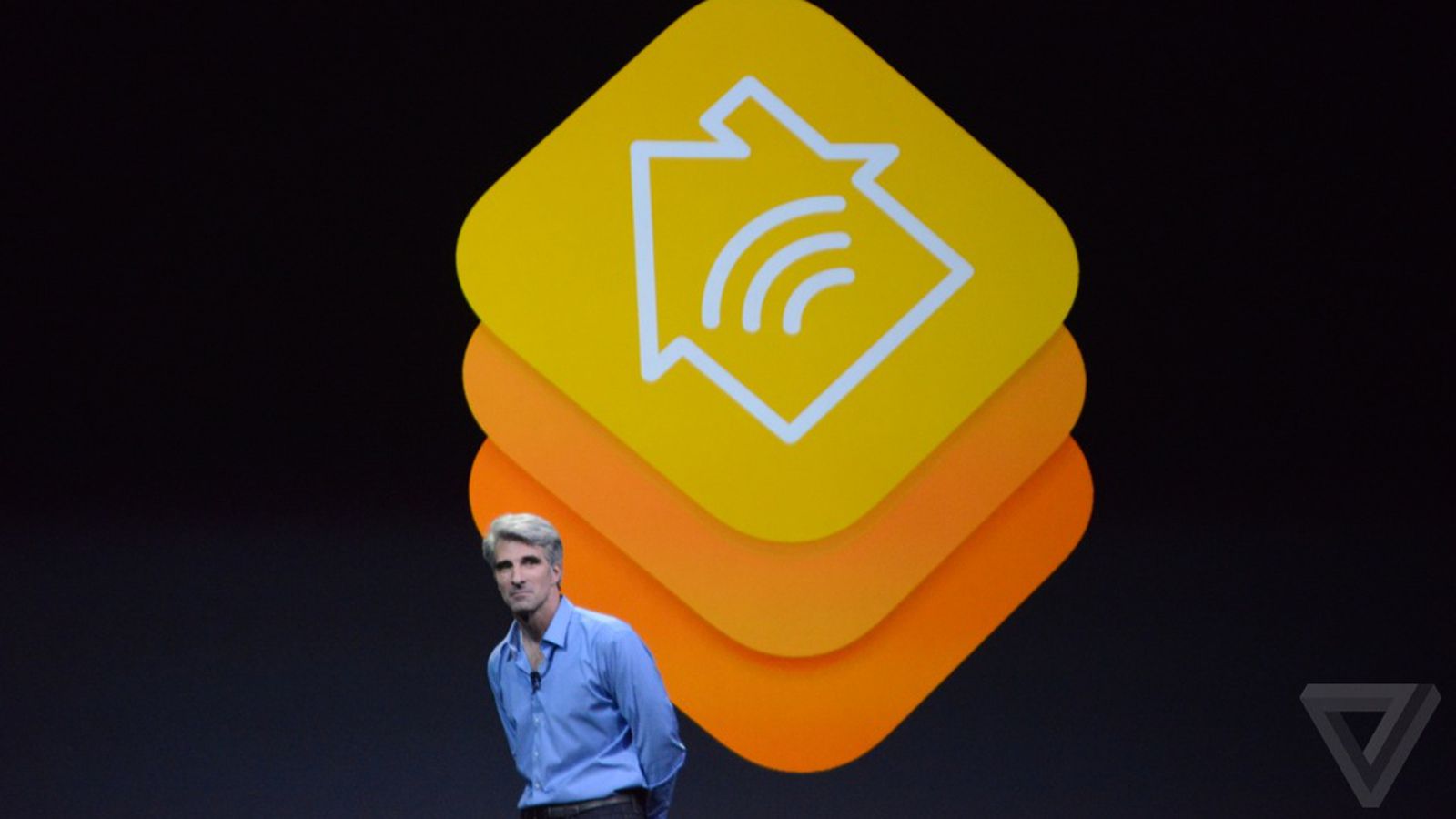 CES 2015 has given us a deluge of new HomeKit announcements. Thus far, we’ve seen several smart outlets, a garage door opener, light bulb adapters, a door lock, and a power strip from vendors...