The FAQ is still posting these buttons as “compatible” with smart things. While that is technically true, we should make it clear to potential customers that they only really work with the IKEA hub and even then they can not be used to run scripts or drive other automations. If you dig into the “detailed” FAQ pages on the IKEA battery buttons you will find the bad news about the batteries… But it probably worth while updating the main FAQ page to warn potential customers.

Done, thanks for the suggestion.

Yes I know… out of the frying pan into the fire!
I will probably leave my blinds on Smartthings and run the aqara buttons off of my HUSBZB dongle on Home Assistant.

Ya same here, I removed all of my repeaters which means the buttons at the front of the house work… but barely and they would take a few pushes for the Smartthings hub to see them… It died after 5 days. It is clear that the repeaters are at play (since they die within 48 hours if paired to a repeater) But they are still dying without repeaters. But the buttons in the room with the hub last about 6 months. Still less than advertised but that is acceptable (ish)

Again, guessing here, but maybe they are trying to phone home with a status update (hi I was pushed up) and they need a response from the hub or repeater, (in IT lingo we call this a “handshake”). No response and they call again and again and again.

They are all in my junk drawer now.

Again, guessing here, but maybe they are trying to phone home with a status update (hi I was pushed up) and they need a response from the hub or repeater, (in IT lingo we call this a “handshake”). No response and they call again and again and again.

So far the most viable theory floating around (but not fully confirmed yet) based on reports from multiple platforms is that for some reason these devices are responding with a long poll rather than a short poll. That would use up battery much more quickly.

The data for this is that there doesn’t seem to be more messages being sent, which is what would happen in the scenario you described. But longer messages could have the same affect.

Whatever it is, it’s weird.

You are lucky! All my 3 that died within 6 days is in the same room as the ST hub!

I wanted to give short update on my findings with the ikea on/off buttons. I have 4 in my home and I have had the same problem with the battery drain, within 48 hours any new battery would be fully drained. So after having wasted like 8 batteries I gave up. A week ago I had to install a new IKEA light bulb and I couldn’t get my smartthings hub to link the new bulb. So I read somewhere that the hub being to close to a wifi router could cause this. I moved the hub to a different room in my home away from the router and voila, the hub saw the light bulb straight away.

Out of curiousity I then added a new battery to one of my on/off buttons and paired it again. This on/off button is now online for 72 hours and still reporting 100% battery. I have now added the other 3 buttons again and will keep monitoring them. So far so good, cross my fingers!

They do, but when they stick, they do run for years without any issue.

There is another rumor that this only is an issue on V2 hubs… Do you know if this problem exists with V3 hubs too?

I use 11 zigbee and 11 WiFi. These two are about as far apart as you can get.

I am getting about one month battery life out of FYRTUR blinds with ST Hub. It should be much more. I think it’s the same problem as the remotes.

Ikea repeaters or no repeaters doesn’t matter for me. Still battery flat within days. I still have zigbee bulbs/globes though however ide says the remotes are connected directly to Hub.

I had a SmartThings v2 UK version and upgraded to a Aeotec v3 EU version and have not had any issues with the IKEA battery drain after upgrade.

I still have same problems that I have to pull to refresh in the iOS app to fetch the device status.

Here’s a update from the guy with SmartThings.

Progress is being made. 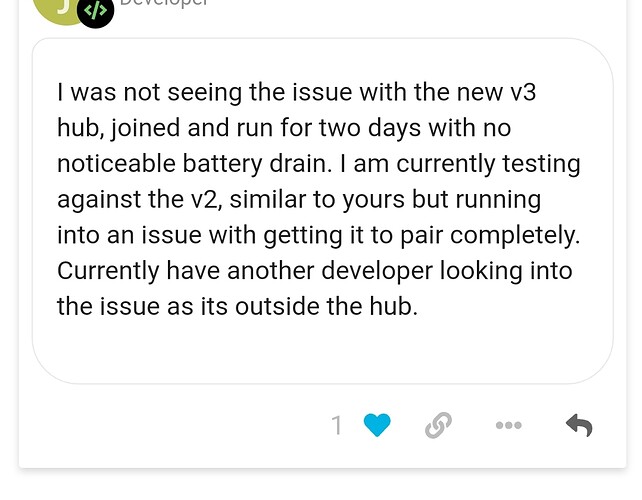 Two days? That simply isn’t how it works. My buttons can run for three or four weeks and then eat three batteries in a week.

My gut feeling is that routing is a factor. If the mesh is such that the button always picks the same router or routes direct to the hub it seems to be happy. If one day a different route is selected it is dead in one to two days.

I don’t rule out certain firmware versions of Tradfri Outlets either. They can do some weird stuff to battery reporting sometimes. I actually wish I didn’t have them everywhere.

Unfortunately I have three outlets very close to my hub so the routes often change.

It shouldn’t be forgotten that it is also a factor of the hub Zigbee firmware version. 2.9.0 still works fine with the buttons. I’ve not changed a battery since April on that firmware.