I use SmartThings but do not use a hub. Mostly Leviton switches which don’t require a hub.

I want to install under cabinet lighting that has good white control. Colors would be nice too but it’s not a deal breaker. I know I could simply get a SmartThings compatible strip, set up automations, and control with the app. Buuuuut…

I have one important person in the house that wouldn’t want to bother having to manually turn on/off with an app. Using the little remote that comes with some of the strip kits would be preferable. But if I use a smart plug, the plug cannot run automations if you use the remote that came with the strip kit to turn the strip off (even if the smart plug has remained on).

Is there a product that fits the bill that isn’t too complicated? A more complex solution would not scare me off, but for others in the house it would not be optimal. Thanks in advance.

I’ll write more later, but one option would be to use smart buttons. There is an option that works without a SmartThings/Aeotec hub.

Use Flic buttons to control any smart plug you want, or to control some smart strips directly. I know several people who have them stuck under the kitchen counter edge specifically to easily control LED lighting. Each button has 3 actions: press, double press, and long hold, so you can do different things with one button. And some integrations allow for “toggle” control, so a single press turns lights on if they are off or off if they are on. They are about the size of a stack of 3 US quarters. 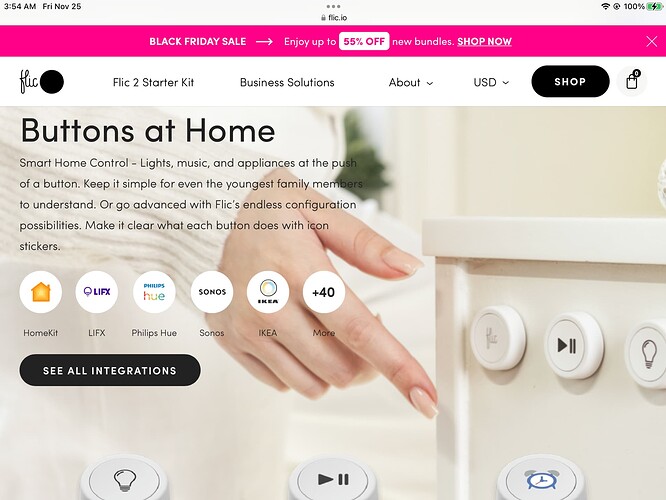 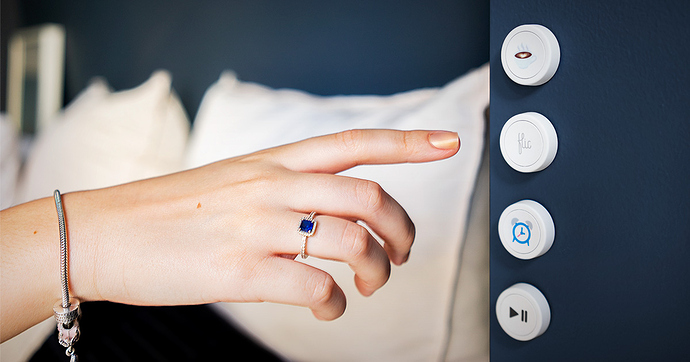 They are the only button other than the now-discontinued Echo button that have the ability to trigger an Alexa routine, which is an easy way to get SmartThings integration, but you can also integrate through other webhooks. These do not require a SmartThings/Aeotec hub.

They also have direct integrations with several big smart lighting brands, including LIFX.

The downside is that you have to get their mini hub to get their integrations, but that’s mostly a cost negative: once you plug it in and add it to their app you never really have to think about it again.

I’ve had these for several years and have been very pleased with them. And as it happens, they are having their biggest sale of the year right now, including starter kits that come bundled with a mini hub. 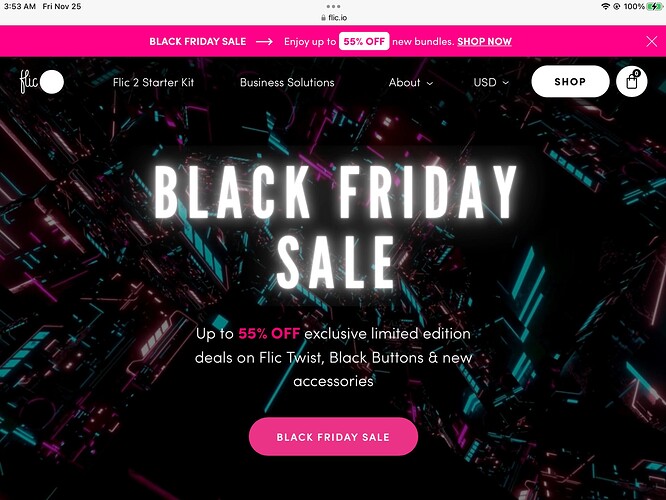 So just another approach. You get any LED strips you want, smart strips or dumb strips with a smart plug if you just want on/off. Then you add a flic button or two to trigger scenes.

LIFX strips would be a particularly good choice with these because they can integrate with both SmartThings and Flic so setup is very easy, but that’s up to you. While the LIFX Black Friday sale isn’t as good as Flic’s, they do have a couple of lightstrip models on sale at about 20% off. 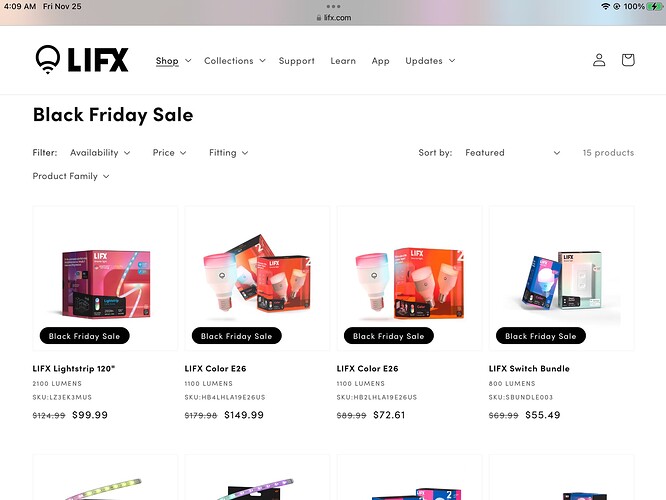 These are both high quality, high feature brands, but not a budget choice. And unlike the handheld remotes which inevitably get lost, the Flic buttons stuck on the wall in a convenient place will be right where you need them next time.

So that’s the easy but expensive choice. Easy to setup, easy to integrate, easy to use. Usually has a very high Family Acceptance Factor (fAF). Is that worth the cost? Only you can decide, but I did want to mention it as an option, particularly with the current sales.

Thank you greatly! I really appreciate your thoughtful information. Although I like the fiddling factor, I will spend the extra money for a simpler setup that someone can more likely figure out in the event of my untimely demise.

I’ve looked at some of these things now. Here is a picture of what I already have in my house at my mantle. My next project for the cabinet lights will require being able to span gaps, like I have a window between 2 cabinets. I don’t need colors, but I like it that the white color was tunable, and it has a super dim nightlight mode. Anyway, questions below this pic: 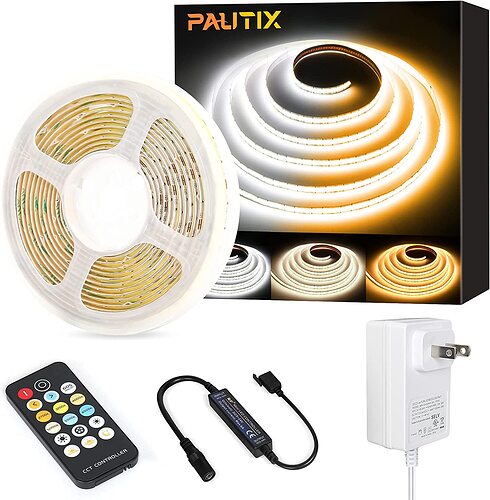 For using FLIC: As I understand it now, I should look for a strip that uses an app, can integrate with smartthings, then use the flic button(and hub). Then I could also have LED automations. I’m assuming that a smartthings automation will turn it on at the same color and dim level that it was when it was manually turned off with the Flic button. Am I stating this correctly?

For using LIFX
I like this, it looks great. However I need to cross those gaps in my kitchen (over the stove and across a window gap) as it can’t be one continuous strip. All these different brands of strips have different connectors. It doesn’t look like I can connect strips with an intermediary cord.

I like this, it looks great. However I need to cross those gaps in my kitchen (over the stove and across a window gap) as it can’t be one continuous strip. 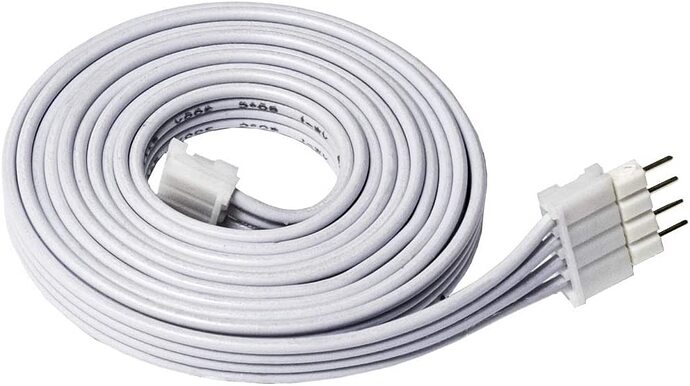 Are you saying you want led strips on both sides of an object like a stove or window, but with a gap between but control them all with one flic button? 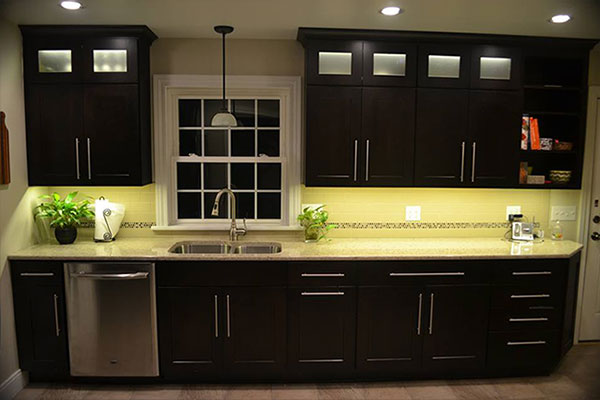 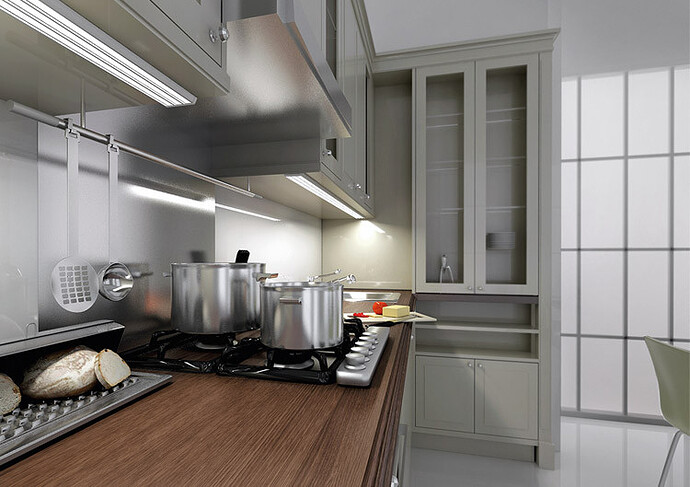 You just use two different strips, each with its own power cord, and combine them in a scene. Then the flic button activates the scene.

Or are you asking something else?

As far as what flic will request the lights to do when you press it, the options available vary by brand and model of lights (again, LIFX probably gives the most options) . But again scenes are often the solution.

For the question of whether the strip itself needs to integrate with SmartThings, maybe not if it does what you want with just on/off. In that case plugging it into a smart plug that works with ST might be all you need. But people almost always want more features than that.

@Perniculous I am using Gledopto Pro controllers. They have couple different remotes, handheld and wall mounted. My kids are using handheld remotes, and I am using only Routines to control them.
They work flawlessly. Also each remote can be programmed to control other controllers.
This is the function that is covering your’s and my need too as I have same situation in my kitchen, controling two different strips with single remote. I am still able to control each controler with routines if needed (only one side flashes when mailbox is open) 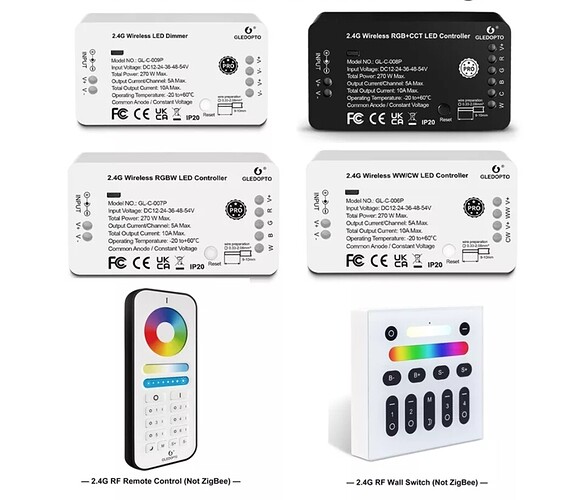 I like the Gledopto zigbee devices ( the pro models are all Zigbee), but since the OP doesn’t have a SmartThings/Aeotec hub, they won’t match this particular setup unless you add a hue hub to control them.

Gledopto does sell some WiFi models but those are made by Tuya and have a different set of integration issues. And, to be honest, I just don’t like them very much when compared to the quality of their Zigbee devices.

Notably absent from the list provided by others is Hue, all of which are ST compatible and can be used with a remote through the Hue Bridge or through ST itself. They are highly dependable and work great and Hue has some big holiday discounts ATM

Notably absent from the list provided by others is Hue, all of which are ST compatible and can be used with a remote through the Hue Bridge or through ST itself. They are highly dependable and work great and Hue has some big holiday discounts ATM

Agreed, Hue is another good choice.

They can also be used with the flic buttons, although you probably wouldn’t, you would probably use one of their own remotes at that point.

The only reason I didn’t mention them, to be honest, is because I was starting from the point of the buttons, and since you need to add the flic mini hub for those, I didn’t want to make a suggestion that would require yet another hub for the LED strips. That’s the advantage of the LIFX strips in a Wi-Fi primary account. No additional hub required. So I was just trying to keep the solution simple. But if you went with Hue strips and use their controllers instead of the flic buttons, that would be about the same level of complexity.

As an added bonus with Hue Lights, the Hue remote shown below can also trigger actions in Alexa routines.

Really? When did that change? It used to be that you could use it as a trigger for HomeKit routines, but not Alexa routines.

I know Amazon has been talking about opening up routines to button triggers, but I didn’t know it was active yet.

I just checked Amazon site and the Hue site and I don’t see any reference to Alexa routines for this device.

answering my own question, partially

I went into routines in the Alexa app and, indeed, my hue hub-connected dimmer is available as a trigger! Not all options for all buttons, but still. Very very cool. Thanks for bringing this up, I had no idea. 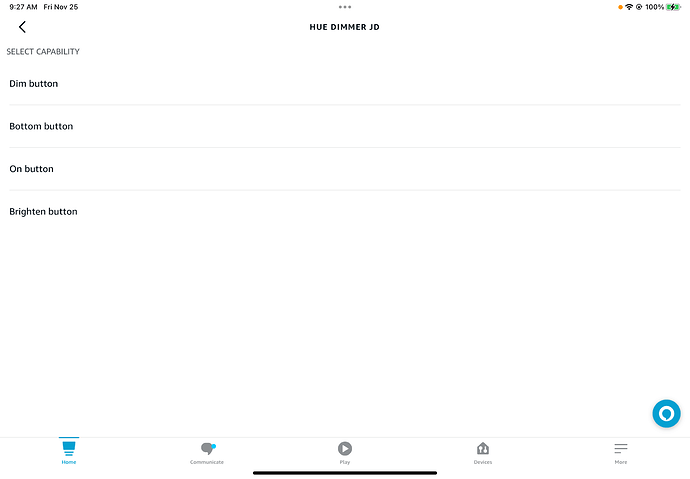 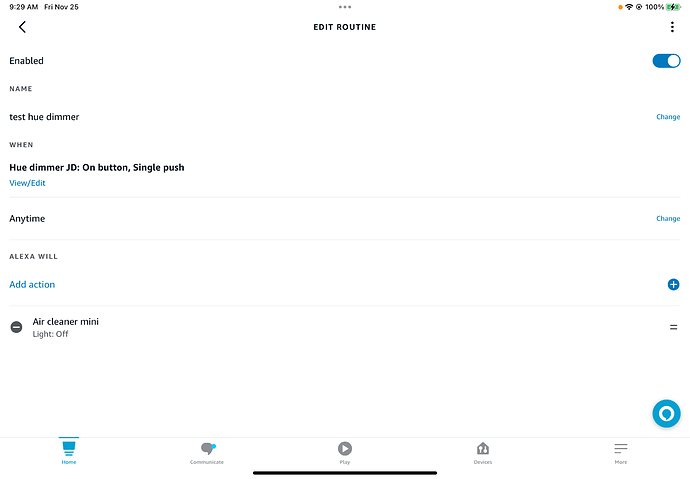 I don’t want to hijack this topic, so I’ve started a new thread on these new Alexa routine options:

That is what I meant, yes, (looks like the first picture). I just wasn’t clear enough.
One problem is that there is no power on the top of the cabinets that are furthest to the right. And, it’s an outside wall that has expanded foam insulation, so fishing romex down the wall and tying into a backsplash outlet is kind of a pain. I can do that, it would just be a pain.

I will keep investigating all the helpful suggestions. What a world that we have all these possibilities.

Ok, I think I will go with the Hue products. Adding the bridge won’t be an issue. I see I can buy an extension cable to bridge the gap I have over the window. Not ideal, but we have a valance over the kitchen window and you’ll only see about 1" of cable on either side and only if you’re looking for it. Or, I’ll figger out how to fish down a line through expanded foam insulation to put power up top.
Thanks everyone! I’m sure I’ll be back…