Can’t include device, seems like the app is missing the last stage of the inclusion process. Hung on preparing and no way to proceed, even though device claims it is included.

Never acknowledges that it was included: 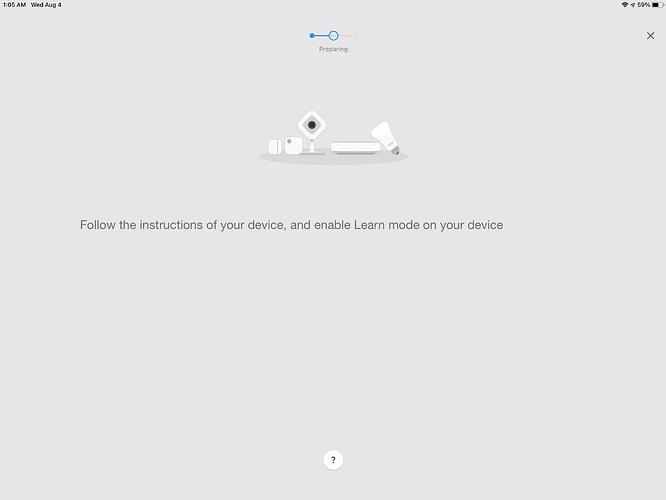 I just included the same thermostat about a month ago and had the same experience. I finally just closed the window (and maybe closed the SmartThings App), but then I found it had been included, just not assigned to a room. Check the devices tab and scroll through all of the rooms to see if it’s there.

I will try killing the app. Closing window didn’t work. Searched all rooms and ide, now you cant sort by network ide!!!

Are you using a WiFi module or Z-Wave module with this thermostat. It’s an issue with the new app where it times out while communicating with the platform for Z-Wave devices, the device actually pairs but it doesn’t show up in the app until you kill the app and restart it.

And if you exit the install it clears the inclusion without telling the device it was excluded. So killing the app doesn’t clear the inclusion. Reminds me of the Iris devices.

So killing the app doesn’t clear the inclusion

That’s correct, if the inclusion by the device is complete, killing the app will have no effect. What I was referring to was an issue with the app/platform where after including the response is registered with the platform but not the app (ie. it creates a device in the IDE but it won’t show in the scanning or pairing page of the app). If it successfully creates a device then killing the app and restarting it will make the device show up. However of the device wasn’t registered with the hub/platform then it won’t show up and that indicates packet loss in the mesh. This happens more often that I’d like to see it, the best way to handle this is to reboot the hub and pair the device within 1ft of the hub.