I’m new here, but I am looking for a simple link to a code to make the Fibaro Dimmer 2 an on/off for my ceiling fan. It is just a fan with no light. The fan has an internal remote control receiver box. I’ve looked all over the site and I seem to be turning up nothing that works except a UK handler codes that make my ceiling fan remote control receiver click like it’s trying to come on, but nothing happens.

I have 2 wires in the box (no neutral) and I have bypassed the physical switch because I don’t want one. Live to L, S1+Sx+N ganged together, Load to (last terminal wavy line with arrow).

Any advice or link to a specific US code would be great. Thanks!

Seems from further reading, I might also have a load calibration issue (constant red light on the module), but I’m guessing that’s because I’m using a UK code currently.

This device is not spec’ to operate a variable fan motor. You’ll either burn out the fan motor or the switch and may cause a fire.

This is true of pretty much all dimmer switches intended for lighting. The physics are different for a motor.

You need to select a device which is specifically designed to operate a variable speed fan motor. Quite a few people take the GE fan control switch and put it in the fan canopy for this purpose. @dalec can say more about that.

But the reason you’re not finding anything about using the Fibaro dimmer to control the fan is that that would be a safety hazard.

Also, the device type handler code would be the same regardless of whether it is the US model or the U.K. model. The only difference is the frequency at which they communicate to the hub.

I was corresponding with a tech from Fibaro USA before I bought it and he said this was the module to control a fan if I was not looking to control the speed. Also, I have found no other smart device that will work without a neutral.

I was corresponding with a tech from Fibaro USA before I bought it and he said this was the module to control a fan if I was not looking to control the speed.

Maybe, if you can configure it to just be on/off before you wire it into the fan and your specific fan model has the means of being wired for just the on/off, which a lot of the variable speed fans do not have. But it’s not what it’s designed for and you have to really know what you’re doing. There are other devices which are better suited, but they’re from other brands.

The load specifications have to match

The fan has to have the ability to be wired for just on/off.

On the on/off requirement for the fan itself…

Imagine this was a plug-in fan. The fan is running. Now you pull out the cord from the wall. If you plug the cord back into the wall, does the fan start up again? Or does it stay off until you do something else with the fan controls?

That’s the issue that you’re facing when you try to use an on/off switch with a variable speed motor. Many of them don’t turn on and start spinning just because they start receiving current. They need the equivalent of a “set level” command as well.

But it does vary from model to model.

Most simple exhaust fans, which only have one speed, do operate on a current = spin design, so they’ll work just fine with an on/off relay control. But variable speed fans are just much more complicated.

For the Record: When simply turning the fan on and off with a toggle switch, it retains it’s memory of what speed it was in when it was last operating under power and continues that mode. There’s no need to select a speed again to make it work.

I must be missing something basic about the 212. If it cannot operate as a simple on/off switch without a neutral, yet it can be wired without a neutral (as per the diagram in the manual), what good is it without a neutral? I’ve got other places in the house with a neutral that I can use it, but why would they offer the bipass if it doesn’t even work as an on/off?

Lastly, can you recommend a smart switch that will work for my 2 wire fan situation? I looked at the GE Fan smart wall switch and it says on the box that it can work without a neutral, but all documentation (online or the sheet that comes in the box) says nothing about how to hook it up without a neutral. I also called their support line and they said it requires a neutral. I told them it says on the box that, “…in a 2 wire configuration, lights will come on with the fan.” He said he didn’t understand it. His manager didn’t either. I then hung up.

It’s very useful when used without a neutral to control regular dimmable dumb LED bulbs in a light fixture. That’s really the main thing that people use it for. They want a smart lighting control dimmer that doesn’t require a neutral wire.

I’m sure this is very frustrating, I’m sorry I can’t be more helpful. Maybe someone else will have more suggestions for you.

Also, my interests tend to be more in the capabilities of the devices themselves. I don’t comment on specific individual wiring set ups as I rely on text to speech and I don’t feel comfortable that I will get all the details. But there are a number of electrical experts in the community, and they may have more to say about the specific wiring you’ve described.

It is a little frustrating as I’ve wasted much time on trying to get it to work via the word of an employee. Thanks so much for your time though.

There is one possible option for the future, and I’m a little hesitant to bring it up because I don’t want you to feel more frustrated since it’s not something you can do immediately. But since you asked about other devices…

Lutron is an engineering company that only makes lighting control devices and holds a lot of patents. Most of the devices in their Lutron Caseta line do not require a neutral. This includes an on/off switch which can work with a fan up to 3 A.

There is no direct integration with smart things right now, although integration was announced this month at CES 2017 and the Lutron staff said they expect it by March. Many people have been asking for it as it does solve the new neutral problem. It doesn’t give you speed control, but it does give you on/off.

You could go ahead and get it now, but the only integration will be through IFTTT. ( or there’s a project one community member has developed where you have to set up a raspberry pi as a middleman, but with official integration coming I didn’t think that makes as much sense as it used to.)

Also, it will require buying the Lutron smart bridge, which is also going to be required for the official Lutron/smartthings integration. So that adds cost as well. I think one bridge can support 40 Lutron devices, something like that.

Anyway, that would work, but it’s one of only two two-wire fan solutions I know of. 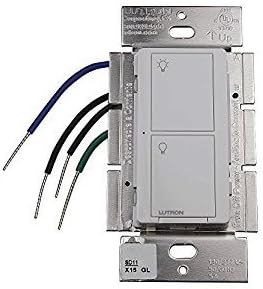 The Lutron pd5wsdvwh is an in wall on/off switch from the Caseta wireless line of control products. It's compatible with many different load types, including 600W incandescent and ELV loads, 600Va MLV ...

The other one is also from Lutron, and it’s older technology. It’s designed for variable speed fans. The Lutron part has two pieces – – The speed controller that goes in the fan canopy and a wall switch. Plus a handheld remote. The trick is that the handheld remote uses IR to talk to the wall switch. That means you can also use a harmony remote and there is a harmony/smartthings integration.

Which is a long way around and again additional cost, but it does mean there is a two wire solution that gives you variable speed control of a ceiling fan if you are willing to also get the harmony hub for the room that the wall switch is in. ( you don’t need the Lutron smartbridge for that second solution, like I said, it’s older technology and doesn’t work with anything except the IR remote. But you can substitute a harmony hub for the lutron remote and that’s how you get the integration.)

So the first solution, the regular two button switch, is probably better if you don’t need variable speed control because it will just show up as a device in smartthings once the official integration is available. So it’ll be a lot easier to set up rules for it.

The second solution, The variable speed option, is available now but can only be automated using harmony activities. So I don’t know if you have any interest in that one or not.

All of which is to say there is a way to do it, but it’s pretty clunky right now.

Really I would suggest using a dry contact relay module for a fan but as you don’t have a neutral at the switch it won’t work.

Like @anon36505037 suggests it is most likely your Fibaro can’t handle the HP load of the motor so have the Fibaro controller turn a small relay on-off that has the amperage capacity to turn your fan on-off safely. I had something similar where I was controlling low voltage LED strips but I needed to control an ON_OFF load so I put in a small relay.

I am encouraged by the various work-arounds as I’m sure I’m not the first one to run into this issue (using any device). Anyone have thoughts on this? --> https://www.alibaba.com/product-detail/Smartphone-Control-WiFi-Ceiling-Fan-Remote_60315748981.html

For a man that doesn’t like cheap Chinese stuff, you seem to have a lot of it!

Thanks for your input man.