FAQ: Where Can I Find Technical Resources for Learning More About Z-Wave?

I’m sure you’ve heard it plenty, but is there any formal training or books or whatever you’d recommend. I’m really just getting into it…

This FAQ is specific to Z-Wave. There are many free or low cost references for zigbee available–just stick to the ones for the zigbee Home Automation 1.2 profile in order to understand use with SmartThings.

As far as zwave goes, the following answer is unpopular but true: zwave is a proprietary standard owned by one company, Sigma Designs. Buy a developer’s license for $3,000 and you’ll get access to lots of training materials, none of which can be published openly on the Internet or bought as standalone books.

There is an open zwave project which is reverse engineering and is good for learning concepts, particularly the management of sleepy devices, the practical uses of associations, the concept of the basic command set, and some stuff like that. It will certainly help get you out of the mindset of WiFi networks. But it’s an abstraction, not firmware details.

Information for the General Public from the Z-wave Alliance

If you want a general public information overview, check the Z-Wave Alliance site. It’s also a good place to read about coming changes and new devices. You can also look up the official conformance statements for individual devices. But you won’t find technical command references there.

- The Internet of Things is powered by Z-Wave.

The Z-Wave Alliance is a global consortium of 300+ companies creating products and services powered by Z-Wave.

If you want to add zwave capabilities to a Raspberry Pi, zwave.me has a nice add on board, fully z-wave certified, available for many different countries. Called the RaZberry. Cost is about $75, and is available from most retailers that sell Z-wave products. Reading about their projects can be educational even if you never build one yourself.

An Introductory Z-wave Textbook Anyone Can Buy

There is one approved Z-wave textbook that doesn’t require a Dev license and Is used in some college network engineering classes, but the english translation has horrible spelling errors (“sealing” instead of “ceiling.”). Also, although the title says " basics," that’s in the context of electrical engineering, not DIY. A typical passage: “In a conductive load the capacitive reactance exceeds the inductive reactance. Hence the load draws a leading current.” 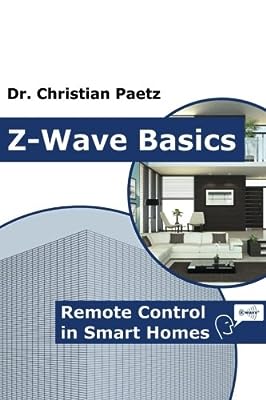 Z-Wave is the leading international standard for wireless communication in Smart Homes. Different products from different vendors work together and interoperate in one single network to provide intell ...

As far as mesh networking in general, I’d recommend looking for specific home automation references. Otherwise you’re going to get deep into electrical engineering as a prerequisite for most of the texts, and that’s likely nowhere near the stuff you’re actually interested in.

As far as zwave goes, the following answer is unpopular but true: zwave is a proprietary standard owned by one company, Sigma Designs. Buy a developer’s license for $3,000 and you’ll get access to lots of training materials, none of which can be published openly on the Internet or bought as standalone books.

True as it may be, most of Z-Wave “proprietary” standards can be googled on the 'net.

Looks like we will now have open Z-Wave interoperability. Hopefully this eliminates non standard devices. http://www.techhive.com/article/3114232/home-tech/z-wave-part-of-it-at-least-becomes-an-open-smart-home-standard.html

Also, Vesternet, one of the largest zwave retailers in Europe, has some excellent Knowledgebase articles on Z wave basics. The following is a really good introduction to how routing works. (Don’t try to compare this to a Wi-Fi network – – it works differently. )

When they talk about a portable controller, or a remote, they mean a handheld device like the Aeotec minimote. Because these don’t have a permanent physical location, they have to keep checking to see where they are relative to the other devices.

In contrast, the SmartThings hub is a “static controller” because it is intended to stay in one physical location.

Also, when they talk about a “re-organisation” they mean the zwave repair utility. Getting each individual device’s neighbor tables up to date.

Z-Wave technology enables you to create a reliable home automation network with numerous nodes and devices communicating with each other simultaneously.