I must be missing the obvious, but can someone tell me how I insert an “OR” condition into a piston? I gather I should use groups, but can’t see how to change from everything being an “AND”.

The condition I want to trigger on is of the form:

Tap on the AND in between the two conditions, it will give you some more options…

Can anyone take a look at this and see if something jumps out? I have a guest coming to stay tomorrow and I want them to be able to come and go and not worry about alarms and such. We’ve set up a second code for guests to use.

When I enter the code, nothing happens. None of the actions fire. I just have the DH as Z Wave lock and every other routine works fine with it. But I’ve never used codes before. I will need to add them in case we ever forget our phones somewhere and come home to an alarmed house.

I haven’t messed with locks in a while but first thing that I can suggest is to watch the piston variables if you’re getting a currentIndexValue, iirc. That will show which lock code index is being used.

Edit: currentEventDeviceIndex is the correct variable

I’d written in another thread about trying to to get some Harmony Activities to run in sequence, linked below.

Basically I have 2 Harmony Activities, Watch TV and Commercial Skip. While watching TV if there’s a commercial break I’d like to instruct Alexa to “Turn On Commercial Skip” and have her activate my virtual switch, and then afterward (~30 secs later) revert back to the Watch TV activity being on. I tried the daisychain approach but didn’t have much success, so I decided to give CoRE a try.

What I’d like to do with CoRE is recognize when the Commercial Skip activity is turned on, run a 30 sec timer (just an artificial time delay so the Harmony Activities don’t overlap each other), and then return back to the Watch TV activity (thereby turning off the Commercial Skip activity.) I tried using the “Then-If” Piston Mode in CoRE and putting together some commands. See screenshots for reference. My Action 1 activity command is the 30 second timer, and the Action 2 Watch TV activity follows. I couldn’t figure out how to turn on a timer other than to check the “Using Location” checkbox at the top. I’m not really sure what this “Using Location” checkbox is meant for, but I assume there’s probably a timer somewhere else that I’m not seeing? The Piston I built maybe runs successfully 30% of the time, but when it does run there is a long delay between switching back to the Watch TV activity (5+ minutes). Could anyone give me some pointers on how to get this Piston running more efficiently? Thanks. 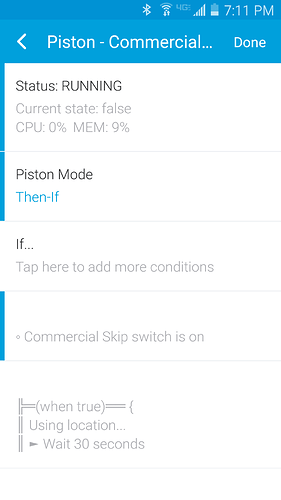 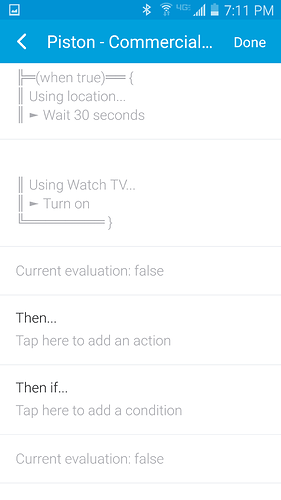 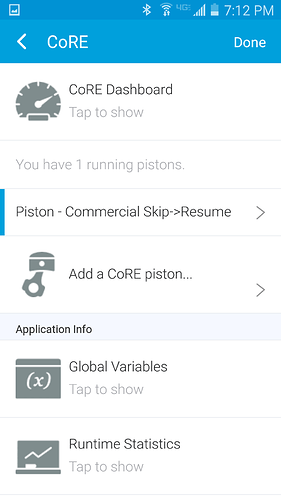 Was trying to use the variables and was wondering if it is possible to save a string value in a variable and later use that variable to turn on or off a switch by giving variable rather than selecting actual switch.

Can someone please advise if this is possible to turn off or on switches by storing their names in variables? If not, it would be a nice feature to have.

You need to have all tasks within the same action.

Not with CoRE - the device needs to be hard-linked into the ST UI. Will consider this as an option for #webCoRE

Thanks. WebCoRE? Can you give more details please? A new upcoming project?

Yes also having an issue with chained pistons since the update. Any pistons with the “Execute Piston” or “Follow up with piston” actions are not running this morning. I tried the “Rebuild all pistons” and “Recover all pistons” but neither fixed the issue. Issue began after the upgrade last night

Edit: The piston that is executed is a “Follow-Up” piston mode piston if that matters but I get no indication this piston is invoked in the logs

Perhaps related (or unrelated) when I rebuild the pistons, a number of them report:

Maybe @slagle or @Aaron, or @vlad can help look into this?

I’m having the same issue–I have a Zwave switch that controls a group of Hue lights. My rule resets the lights to 3200k @ 100% brightness and it seems sometimes the ‘on’ command is sent or the color change command is sent, but never both (sometimes neither). I also can’t seem to trigger them to turn off. Definitely seems like a CoRE / piston issue as I can control the Hue group from SmartThings just fine. My other non-Hue light rules seem to be working so far…

I haven’t messed with locks in a while but first thing that I can suggest is to watch the piston variables if you’re getting a currentIndexValue, iirc. That will show which lock code index is being used.

Edit: currentEventDeviceIndex is the correct variable

Thanks. I’m not 100% sure what to look for and how. Should I just enter the code and then look at the piston in the IDE?

When I look at events for the lock it says Was unlocked with Code 2. But I don’t think that’s what you mean. So if you can tell where to look and when. While its triggering, after it triggers, etc.

Also noticing weird issue this morning woth latching pistons and waits. Waits are non existent for me right now. I’m not at home so I cant check the logs for errors. CoRE runs 75% of my setup and it’s been rock solid for me. Pretty sad that this update seems to have broken it now. I dont mind missing a schedule or a light not turning on, that’s to be expected. Breaking a widely used app that fills in for smartthings short comings is unacceptable.

Joke aside, the problem is affecting the ST SmartApps in general, not just CoRE in particular.

When you enter the code and you view the piston in the dashboard, it will populate variables and you’ll see currentEventDeviceIndex variable with a number next to it. I’m guessing it would be 2, but not completely positive.

You can then perform some tasks based on the lock code used. See if the following makes sense… it’s just a test piston, substitute your device.

Why doesn’t this turn on the outlet? It works if I run a simulation. I can turn on the outlet anytime with a minimote and it turns off correctly at midnight, but it will not turn on automatically. I want it enable it after 5pm, but turn on automatically when lux is less than or equal to 600. If turned on manually, no matter the time, I want it to stay on until midnight. 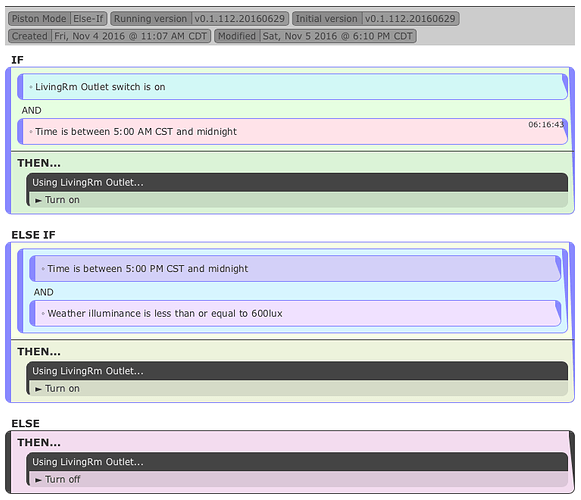 Is there any way to have a piston that triggers by day (or week?) of a month? Or is a time required for day/week/month/etc restrictions?