It should be able to open it in the internal SmartThings browser. Maybe @625alex or @tgauchat may have some insight, as the SmartTiles app has a preview-with-internal-browser and also a view URL option to capture the link without having to dig in the logs.

Just hadn’t had time but will make the image display in an internal div so it can be copied. As for the copy URL, I can do it in the dashboard, easy, via clipboard API

PS i just found out this morning that Android does not open the browser, it does it “internally”. IOS opens it in Safari when I use style: “external”.

Im Trying to have a lifx lamp do a 20 second color cycle at sunset…we’ll see what happens! 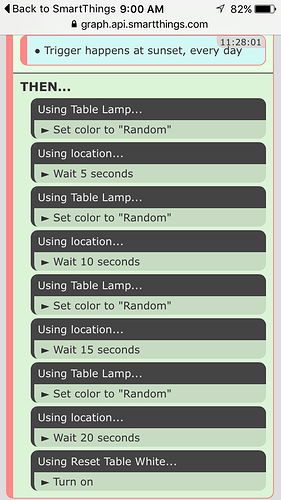 @eric182, note that the wait times conveniently add up to the previous ones, IF used within the same action. You need Wait 5 seconds all around. No need for the progression, 10, 15, 20…

UPDATE: Actually, looking at it, you got it all wrong. Wait tasks only affect tasks following it within the same action. You only need one action:

Also, shouldn’t the last task be “Turn off”?

Keep the first action and just keep adding tasks to it… Remove all other actions.

Thanks, I’ll figure this one after work. String work ady!

Also, the last action, which is turn on reset table white is a virtual switch that turns the light back to plain white and then off.

Okay, because it’s kind of counter intuitive, you’re asking it to turn on…

you can always set the color to white and then turn off too. But do put all tasks in the same action please. It’s easier to comprehend and less UI navigation too…

The proper way is to access it from the Smart Apps menu, not the Marketplace, I guess

This SmartApps menu… Is it pressing the three line symbol upper right corner and then click SmartApps? If I do this, clicking done after setting up Piston exits CoRE as well. Same behavior if accessed from marketplace.

Yeah, that’s something that started happening on Android a few days ago. I’ve downgraded down to v0.0.030 to test and it does the same thing. So it must be something with ST’s Android app. There is no error anywhere… This must be related to CoRE being both the parent and its own child. Used to work fine, it may be a temporary thing, like my Sonos not being able to playText for a few days (error on ST’s part) and then started working just fine, on its own. I’ve learned to not panic the first time around, just wait it out for a few days…

I’ve learned to not panic the first time around, just wait it out for a few days…

Last night I was getting a screen capture of my SmartApps screen when I select the camera icon, not the rule. Today I get nothing

The images you posted do not show the “any door” version. And if you use multiple doors, you would have to use multiple variables. Are all doors controlling the same light?

3 doors to control 2 lights. If any door opens, turn on both light and eventually turn off both lights 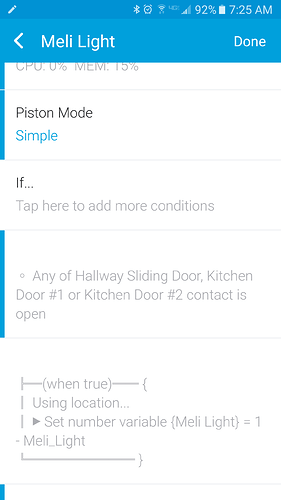 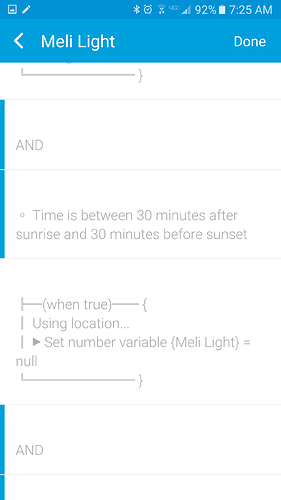 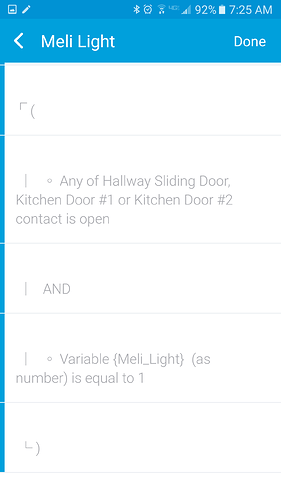 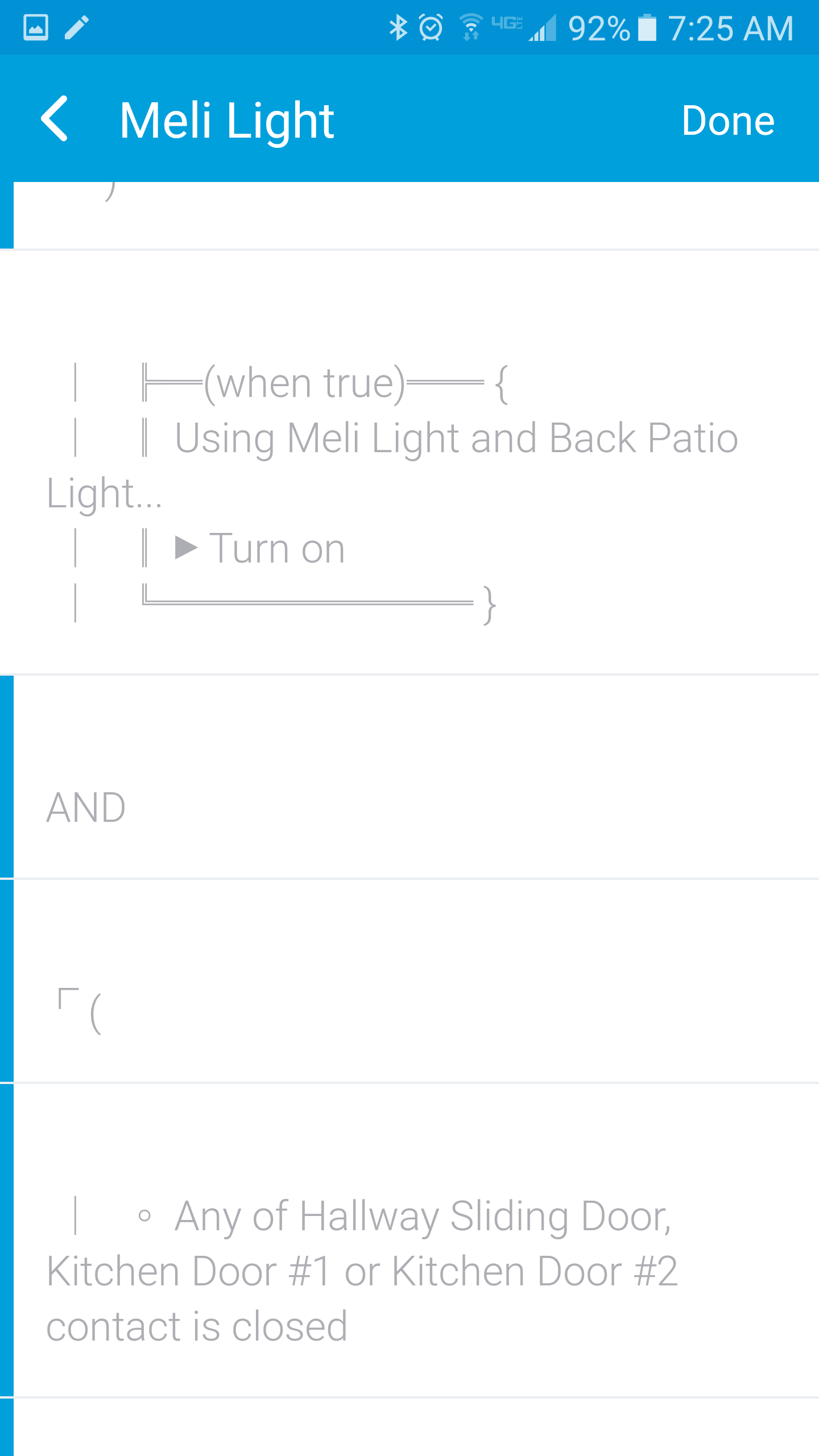 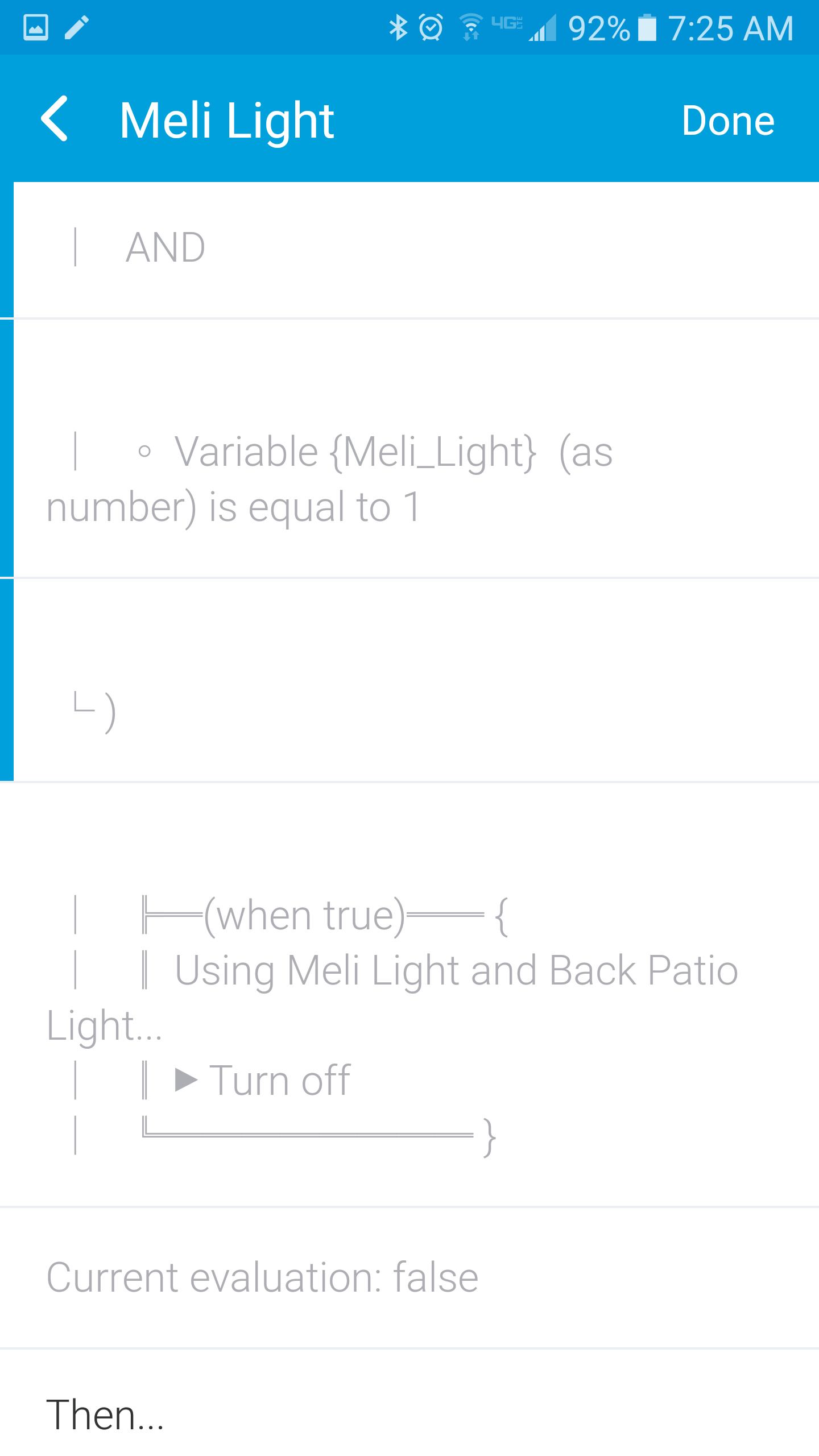 Hrmm. Rule Machine went through the same thing for a period of time, I was thinking it was something in the program, but that doesn’t eplain you rolling back to way earlier version of CoRE

You can try yourself. Go to github and choose any old old version and save it into the IDE. Then open a piston and hit Done - it still goes out - and may screw up stuff on the piston

but then revert to latest and open the piston again and click Done to “fix” it.

I think Android doesn’t open the link in the tablet’s browser even if I asked for external. Grab the link in the logs and open it in the browser instead. Also bookmark it for fast access

It should be able to open it in the internal SmartThings browser. Maybe @625alex or @tgauchat may have some insight, as the SmartTiles app has a preview-with-internal-browser and also a view URL option to capture the link without having to dig in the logs.

I didn’t follow the thread, so I don’t know what you guys are doing. Opening an internal preview browser is enormously painful code-wise and was a cause of much grief. We almost fully migrated away from that pattern in SmartTiles.

I encourage you to try something else and check with @slagle and @jody.albritton on the status of the Android UI fix that would allow you to open links in external browser properly.

This is really incredible… already a lot more powerful and informative than RM… although I suspect not as easy to use for the average user. I’ve already found some of the additional grouping functionality useful. Keep going!

The plan is to dumb it down when Expert mode is off. But yeah, versatility and friendly are not good neighbors.

The problem Toasty is having is that Android opens “external” hrefs in a web wrapper within the ST app. In a hurry, I made a screen capture of a piston “image” that generates a data URL of a png representing that image. I then open that in a new tab (easiest way at that time) so that people can hold click and save it, then post it here on the forum. iOS works fine as it really opens the link in Safari. Android won’t allow that “open new tab” so @Toasty can’t really save the image. I’ll make it display in an internal div with an img tag and then that problem is gone. The second problem is he can’t really open the dashboard in a browser unless he goes into the logs to pick up the URL. I need to display the URL in one of the pages there, possibly in a disabled text area, so he can copy it and paste it into the browser’s address bar. Also easy to fix. Other than that, the ST wrapper works pretty good. I have just a dumb html hosted on the SmartApp that provides the framework (all javascripts and css to load). The rest of the code is in a CDN hosted on a server I am paying for, but will be moved to rawgit as soon as changes quiet down. No server-side code whatsoever, all code is in client. AngluarJS rulz.

v0.0.063.20160603 - Alpha test version - Save/Load state seems to work. LOL. Local state is piston-wide, global state is across all pistons. Each device gets one state stored locally (one per piston) and one stored globally.

State variables are a different kind of variables that contain pairs of attribute:value. You can save the state of a list of devices into a single variable by using aggregation. Haven’t thoroughly tested that yet. Data type should be pretty automatic there, so if you do the avg of switch, power and energy, the switch should stay a string (the most common in the list), while power and energy should get their mathematical avg. But I digress…

There are in total 4 save tasks and 4 load tasks. The save gets the value from a device (or a list of devices) and “saves” it into a variable. The load gets the value from a variable and “loads” it into the device. If anyone wants to rename these to Capture/Restore, I can do that (I believe there was a poll that pointed out this way). Give load/save a chance and if it’s a no go, we’ll rename them. Poll to follow soon.

The 4 methods are different:

For options 1) and 2), the save tasks provide an aggregation method - this only applies when there’s more than one device in the list, obviously. The load tasks provide two parameters to allow translations. Sometimes, you’ll want to save the state of a door into a variable and then load the state of a switch from that variable. This is where translation comes into play, because while the door may be “open”, I can’t set a bulb to that. So everything is translated into booleans. There is a list somewhere above that describes the list of values for true and false. There is also a Negate translation which allows you to change the meaning of open and closed to their reverse.

Enjoy and be gentle if you find bugs… I’ve done the minimal testing, as usual.

NOTE: Be cautious when loading multiple attributes from a state, especially with lights. You will soon find out that loading level, hue, saturation, color, colorTemperature and switch all at the same time may not yield the expected results because… color sets all of level, hue and saturation, switch may also change color with some DTHs, colorTemperature sets your color to white, etc. To try and help with this, I am sorting the list of attributes alphabetically so that switch comes after level. But, it may not always do the trick due to the mesh nature of the network. Best to limit your use to a certain attribute, or attributes that don’t mutually affect each other. How do I make this DOUBLE BOLD? Or triple?

Quick question on Then-If’s…which if does the else correspond to? Which is the correct logic?