In that case, try a $15 Lario to any speaker with a 30 pin port and if it works, you’re golden. (Not all cheap speakers, even mains-powered, provide enough juice to run the Lario wifi, but it’s worth a try. ) 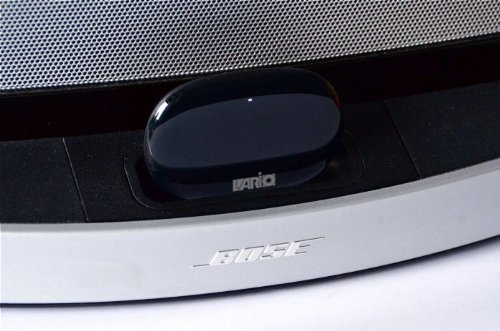 Would you like to Stream music directly from your iPhone or iPad without the hassle of wires? The Lario Music Receiver is perfect for you! Unlike standard Bluetooth receivers available on the market, ...

Lots of dock speakers at garage sales these days.

If you prefer to buy the speaker piece new from a place with a good return policy, Amazon Warehouse Deals currently has a lot of 30 pin dock speakers, several for under $20. Some are also alarm clocks. These are mainly “discontinued by manufacturer” items from companies that switched to Lightning ports. Get one that is mains powered, not USB or battery.

So $20 for the speaker plus $15 for the Lario. I wouldn’t play music over these, but should be OK for chime/voice notification.

Using the UPnPlay app, can an old android phone connected to a bluetooth speaker work as an announcer? I’m assuming I’d use Big Talker for this?

I picked up a Raspberry Pi 2 yesterday, along with an Altec Lansing iMW855 Bluetooth speaker with Aux In.
The speaker was on sale for 50 at Microcenter.

There are UPnP/DLNA renderers for the Pi, so you could easily set the Pi up as your renderer and a set of speakers as the audio source.

I also own a Netgear WN3500RP Wireless Extender which has DLNA support and an audio jack output. This is going to become my primary renderer connected to the Altec Lansing speaker.

A Pi 2 and the Altec speaker (or other amplified speakers) would make a great low cost DLNA enabled speaker.

So I have my Pi 2 set up running OSMC. But it does not show up as an option hen setting up MediaRenderer app. Am I missing something @Aboxman

Actually I just got it working. My issue now is there seems to be a delay that’s cutting off the beginning of what it’s supposed to say.

I have the Pi working with local speakers out the audio jack. Has anyonce created a recipe/documentation to have the Pi with a USB bluetooth dongle be the audio source, then pair with things like an Amazon Echo?

I would love to double-dip on my Pi and have it running both Homebridge and this, since my Pi is in the basement, and it was only tested with headphones.

Figured out that the beginning of what was supposed to be said was being cut off when playing through my tv via hdmi. When I just plugged speakers into the pi, it doesn’t cut anything off. No idea why this is. It seems it takes exactly 5 seconds after something is triggered to actually play through the speakers. Wish I could speed this up.

@Rick_Guthier with the cost of the pi being so cheap, wouldn’t it just be easier to use a second pi? I’m running OSMC on the pi I use for a DLNA speaker. Unless you already have a OSMC or KODI box in your house, you may just want to go ahead and build the second pi and mess around with the OSMC experience. With your pi being in your basement, bluetooth might struggle connecting to a bluetooth speaker elsewhere in your house.

Thanks for that. I’ve messed with Rasbmc or whatever the xbmc version was on the Pi, so I’m familiar with it as a MediaCenter box… My biggest hurdle is bluetooth audio to my Echo. I’ve already got a bluetooth dongle for the pi, and the distance/floor might work - its probably 15’ between them (and the floor).

I don’t want to dedicate any additional audio equipment for this - the main AV audio gets turned on/off constantly and switches sources, so it isn’t an option for this. Since the Echo is already always on, I’m fine with dedicating the bluetooth pairing to this, if I could get drivers and audio to work.

I’ll try OSMC to see if it can recognize the bluetooth dongle, and see if it works.

2 quick things. 1) the new pi 3 has bluetooth built in so check that out. 2) I am now using Volumio on the pi for DLNA.

Seems to work well with the Xiaomi Network Speaker, these are fairly cheap.

how is that speaker for sound quality?

What do you use your xiaomi speaker for on smartthings?

I’ve been wanting to check out Fariq’s new speaker. Handsfree Alexa built in, but if it’s like the smaller one it has airplay, bluetooth and DLNA in it as well. Would think this would be a better option than buying the echo itself. And its portable.

@fightingmajor
I have a pi 3 running OSMC and it is working well with Kodi Media Center. But that DH does not do text to speech. I have used MediaRenderer to play text through my Kodi before. But I cannot have both DH for one Kodi. At least I have not been able to figure out how to do that. Can I just run OSMC on another pi 3 and use MediaRenderer to do my text to speech and not have any compatibility issues with SmartThings?

I suspect there are a lot of us who are new and already invested into Google speakers through our homes who really want to add triggered audio notifications within Smartthings and aren’t comfotable with attempting Google cast or Google relay. (Maybe a tutorial for newbies exists, but I havent found it)

These DLNA options might be a good choice because a Sonos speaker isn’t cheap.

Maybe adding one or few cheap Amazon speakers and using echo speaks would be a reasonable cost that newbies could integrate?

For a newbie smart house on the recent covid 19 budget with Google speakers and just wanting voice notifications is the DLNA route or echo speaks easier to integrate?

I have used both and honestly they’re about the same. I have had some difficulty getting echo speaks to recognize my Amazon Fire pads. But echo speaks easily recognizes all of my echo dots and that works very well.

You don’t even need echo speaks. Amazon offers its own routines (not SmartThings routines) which allow you to have any echo device in your home speak any custom phrase that you want. Or you can have all of them say the same thing.

No custom code required and it’s really easy to use. So unless you have a particular reason for not using echo dots, I think they have become the inexpensive device of choice for this particular use case now.

Amazon offers its own routines

Am I missing something? What are these?

Amazon offers its own routines

Am I missing something? What are these?

The Alexa app has a simple rules engine built into it now, as @rontalley mentioned. It’s in “If This then that“ format but with some additional filters available. And among the “that“ options are having an echo device either say a custom phrase or play a sound effect like dogs barking or a siren or a doorbell chime. Very cool.

To connect it up with smartthings, follow the link to the FAQ that I posted. You can create a virtual device that can be used as the “if“ in the Alexa routine.