Any cameras that can report motion event to ST?

Are there any cameras that can report a video motion or PIR motion event to ST in a timely manor? The D-Link IFTTT camera can using IFTTT, but wondering what other options are out there.

Almost any camera can do this, so it all depends on your use case and budget.

I have indoor and outdoor Foscam cameras using @RBoy’s device type and they report motion events to ST. My Arlo cameras also do this.

Apparently not the other D-Link cameras.

Unfortunately not, this is currently a one way integration. SmartThings can send commands to the camera but not the other way around.

Arlo and Blink both can, Arlo through IFTTT and I think through the official integration as well. Support could confirm that.

And Blink through RBoy’s paid app, which has official approval from Blink.

Both are popular in the community.

Another option:
I use bunch of Wireless IP cams with Blue Iris to trigger motion events using these instructions here. Works great:

I don't use Blue Iris, but iSpyConnect. I think it has the same functionality though – when iSpy detects motion, I have the software hit an HTTP endpoint. Here is the SmartApp to do that. You'll also need to create a simulated motion sensor. /** * Camera Motion * * Copyright 2015 Kristopher Kubicki * */ definition( name: "HTTP Motion Endpoint", namespace: "KristopherKubicki", author: "kristopher@acm.org", description: "Creates an HTTP motion endpoint for your camera or other device", category: "Convenience", iconUrl: "https://s3.amazonaws.com/smartapp-icons/Meta/intruder_motion-cam.png", iconX2Url: "https://s3.amazonaws.com/smartapp-icons/Meta/intruder_motion-cam@2x.png") preferences { page(name: "selectDevices", install: false, uninstall: tr…

Webcam and video security software. Record, playback and watch your surveillance cameras live at home or on the go with our mobile apps.

From my understanding, motion detection for all these cameras will ONLY work when the camera is armed.
So, you get motion alerts and not motion. I had a Foscam and found this was the case.
This is an important distinction because I wanted to know there was motion any time and not just when the camera was ‘armed’.
Others can correct me if I’m wrong concerning the Arlo?

Another approach is to use an IP Camera that has some Input/Output connections. I have 6 IP Cameras and all but one have an output that can trigger a device when the camera raises an alarm (configurable). My dome cameras are all Hikvision and they have both an input (to trigger recording) and an output (to trigger something upon condition met). If you hook up one of those dry contact sensors, your generic IP Camera can now trigger events in ST without any additional software. Even one of my D-Links (low cost motorized IP camera) has the IO. I have not tried this so there may be unforeseen issues with this setup.

Biggest issue is that unless the camera has a PIR sensor, the image based motion triggering is very prone to false alarms.

Ture for the motion alerts that’s built-into the Foscam.

Not sure about Blink/Arlo, never used them.

For Blue Iris, you don’t have to use the built-in motion alerts in the cameras with Blue Iris. Instead I use the Blue Iris motion features with all my IP cams. Blue Iris gives you many options on motion detection/events/alerts, so you can set up things so it send/trigger alerts whenever/however you want.

Others can correct me if I’m wrong concerning the Arlo?

As far as I know, Arlo takes a similar approach, at least for their battery-powered cameras which is what I have. When the camera is armed, the motion even triggers an alarm… you can set that to either record, send you a notification/email or trigger an event in ST.

If the camera is disarmed, it won’t do anything. 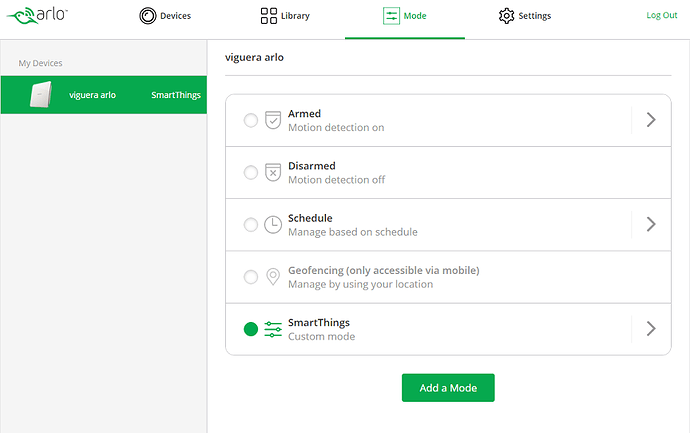 From my understanding, motion detection for all these cameras will ONLY work when the camera is armed.

I’d be OK with it only reporting motion when armed.

I was considering getting the Blink cameras in the near future. Actually need to go through the lengthy thread on Blink ASAP.

Anyway, My thoughts are I would want the camera to report any motion to me independent of the ST armed/disarmed mode. But I guess that wouldn’t work when I’m home because it would almost constantly record. But what if something happens when I’m home. I’ll just miss the action? Just trying to wrap my head around the various ways of configuring these things.

Anyway, My thoughts are I would want the camera to report any motion to me independent of the ST armed/disarmed mode. But I guess that wouldn’t work when I’m home because it would almost constantly record. But what if something happens when I’m home. I’ll just miss the action? Just trying to wrap my head around the various ways of configuring these things.

I was in a similar situation.

What I wanted was to be able to have cameras that were always alerting, because I was interested in motion in those areas, and others that alerted based on mode. For this I went with @RBoy’s code, which he actually tweaked to suit my scenario after I explained the situation to him.

Basically I have two instances of his foscam motion alarm monitor, one for the “always alert” zone and another for the “conditional” zone.

The “conditional” zone app handles my indoor cameras. The app allows me to set presets based on house mode. So when the house mode is “Home” I have the cameras go to preset 1, which is looking up at the ceiling. When the house mode is “Away/Vacation” then the cameras to go preset 2, which is pointing towards the living areas. I also have the app set to monitor only when in Away/Vacation mode, so even if someone turns on a light in the kitchen and triggers the camera it won’t generate any alerts.

The “always alert” zone app has the outdoor cameras and the garage. This all is configured to alert all the time, regardless of house mode, and send push notifications.

When everything works, the system doesn’t bother me when I’m home and there’s motion in the living areas for example, but it does let me know if there’s motion on the driveway or garage. And if I’m away then it cries when something happens, which can be bad if there’s a bird around or the FedEx guy comes by.