Amazon said it's acquiring Eero for an undisclosed sum

Now this one makes perfect sense to me.

“We are incredibly impressed with the Eero team and how quickly they invented a WiFi solution that makes connected devices just work," Dave Limp, senior vice president for Amazon devices and services, said in a statement. “We have a shared vision that the smart home experience can get even easier, and we’re committed to continue innovating on behalf of customers.”

Yeah but it feels like sooner or later there’s going to be really only 2 companies that control absolutely everything… maybe Weyland-Yutani and the Umbrella Corporation.

I guess for a while that wouldn’t be bad for consumers… Nowadays there are plenty of devices that don’t need a hub already, so if this transforms the consumer space a bit more to make it so that you can get your router / mesh / smart home hub from one company and basically everything just kind of works, then that wouldn’t be a bad thing.

Amazon definitely needed to do something because pretty soon all the customers buying all those echo devices and all those Wi-Fi pocketsockets were going to hit the max device limits on their Amazon – purchased WiFi routers.

This should enable Amazon to get out in front of that, always a good thing in the consumer space. (“But you sold me this! You should’ve known it wouldn’t work at my house!”)

BTW, Amazon’s on staff smart home consultants have been recommending eero for over a year, which is also interesting.

I think it’s a good move for them to since it makes it relatively easy to move a good deal of the consumer devices into the 5GHz spectrum somewhat in the background, and free up some of the 2.4GHz band for those devices that live down there, which should improve reliability overall.

Yeah but it feels like sooner or later there’s going to be really only 2 companies that control absolutely everything… maybe Weyland-Yutani and the Umbrella Corporation.

Very, very, very, very bad thing for the economy. In the past, American government regulators were much more aware of the danger of monopolies and took appropriate actions. But then came airline consolidation, communications (cell, telephone, cable), banking, and … the big 4. 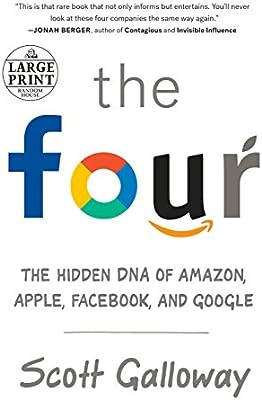