I want to know if smartthings hub can control hue bulb directly ,thanks a lot.

I want to know if smartthings hub can control hue bulb directly ,thanks a lot.

It can, and some community members do set it up that way, but smartthings officially only recommends using the hue bridge because there is a problem where once you have connected a hue bulb directly to the SmartThings hub you may not be able to reset it again unless you buy yet another device. This is because the SmartThings hub uses the ZHA profile and the hue bridge uses the ZLL profile, and once you’ve connected the bulb to the hub you won’t necessarily be able to switch back.

Also, you will need a custom device type handler to use a hue bulb which is connected directly to the smart things hub but there are some available in the community.

Thanks for your so quick and professinal answer.

I am a fresman in the community. and I have slold hue copatiable bulb online. Actually ,my bulb can copatiable philipse hue bridge very well and sold a lot.

Now I want to know if my bulb can compatiable to smartthings ,I am interest in it . but now ,I have not smarts hub beside ,that is why I want to answer the question.

It seems like a reasonable concept to use the Amazon Echo as a Sonos connected SmartThings device.

The long answer is no. Can’t be done.

It seems like a reasonable concept to use the Amazon Echo as a Sonos connected SmartThings device.

It can’t be done just with a device type handler because at the present time Alexa devices do not support TTS themselves. There was a news article this week that that feature may be coming in the future, but it’s not here yet.

There are community members using other devices to create TTS files and then just use echo as a Bluetooth speaker to play them. Lots of discussion of this in the forums. Here’s one recent one:

The echo can definitely be used as a Bluetooth speaker. The issue is that it doesn’t support TTS ("text to speech), all it can do is act as a realtime streaming speaker for another device. So you have to set up some other device to decide what sound file to send to the echo and when to send it. You can also just use any cheap android device for voice notifications, Among other things, that’s how LANnouncer works. For other devices see the following list. It has both very cheap and very expensive speakers. And this for just the cheap ones, but it hasn’t been kept as up-to-date as the master topic.

So at one time I saw on the app that echo was supported and now I don’t see it and only see google home. Is echo able to be connected?

Connect through the Alexa app

Finally! Alexa can change the color of your smart lights

I’ve tested it out. Works great.

Has anybody seen a list of supported color names?

Not sure whether they are the same as SmartThings colors, but here’s the ST list that works with Hue.

I’m trying to creat device names that I can easily identify using tags but that can also be heard and understood by alexa. I’m wondering if there is a way to have alexa ignore part of a name. I’ve tried brackets, braces, and parentheses but they don’t seem to work.

Does anyone know a way to have her ignore part of a device name?

Alexa should try to match what it can… so just saying “Landing Light” it may say “I found multiple devices matching that name” and then you tell it the specific one… but that leads me to believe that it already searches for partial names.

One trick you can do with Alexa, though, is put devices in Alexa groups and use those group names for the voice access. Maybe there’s only one device in that group, but it doesn’t care. Like I have a moveable switch (the kind that plugs into any outlet and is controllable) with a specific name in Smart Things but while we had the Christmas tree plugged into it, I made an Alexa group called “tree” and put that switch into it. SmartThings doesn’t know what “tree” is but Alexa does at that point.

I have found that using regular common names is the best approach for Alexa. I have 119 Switches and/or Buttons that Alexa operates and all of them uses common, easy to pronounce names. The ones that she struggles with or gets wrong sometimes, I use the group function to better assist.

I also do this to name the same devices different names for different family members. I might say Den, Wife might say Family Room, kids might say TV Room. 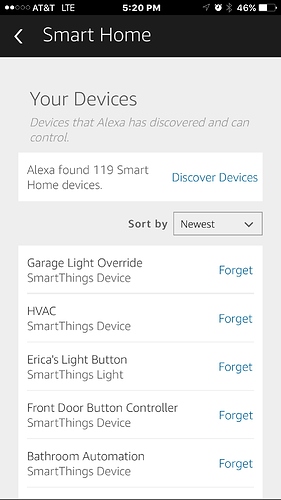 Amazon says iCloud Calendar support is live now in three regions: the US, UK, and Germany

Amazon has announced that its voice recognition Alexa family of devices can now read from and save changes and additions to Apple's iCloud Calendar.

While Apple may be planning to unveil its ‘Siri Speaker’ next week at WWDC, Amazon is updating its Echo ecosystem to work with iCloud Calendars. Amazon’s Alexa app can now link Ap…

Amazon Echo will now do notifications. A little over a month ago, Amazon announced that notifications would be coming to Alexa devices like the Amazon Echo and Echo Dot. The feature is now live,

Amazon Echo will now do notifications

Still goes to every device… Great for those with one or two devices, but if every family member has one… It’s pointless