I just picked up an Echo 4 with the Zigbee Hub
I successfully added some Sonoff Contact sensors, but need to also get them into SmartThings (I don’t have an ST Hub) - I do have a Sonoff ZBBridge and it added directly to ST along with its sensors, but trying to see if there is a way to utilize the Echo Hub directly
There doesn’t seem to be a way to directly translate the devices from Alexa to ST (only the other way i.e. SmartThings to Alexa)
Do I have to create virtual switches in ST, then routines in Alexa to trigger those off the actual sensors, in order to get them into ST?
Or am I missing something simple?

The Zigbee profile that smartthings uses only allows for one hub per network. So you can attach the sensors directly to your echo device or to the smartthings hub, but not both.

If you attach them to the smartthings hub, they will then show up in your Alexa app through the smartthings/Alexa integration and you will still be able to use them in Alexa routines as well as in smartthings.

If you attach them to the echo device, they will never show up in smartthings. As you noted, You can use them to trigger an Alexa routine and have that turn on a virtual Switch in smartthings and then trigger off of that, but that’s a lot of work.

So I think most people with smartthings would just add them to the smartthings hub. Then they will show up in both apps.

If what you had instead was a zigbee switch, then there’s an advantage in that you do get a very small amount of local voice control over zigbee devices which are connected directly to an echo device. Because I myself am a wheelchair user, I have a pathway of zigbee switch devices set up from my room to the front door that are connected directly to an echo device so that I will still have voice control of lighting if the Internet goes out. But unless you have a need for that, connecting directly to smartthings is usually the better choice.

Thank you JD
I do not have an ST Hub - its unfortunate they are so expensive (even the new Aeotec is about $120) With a Sale and 25% discount for a trade up on a broken echo dot, the Echo 4 ended up at $60 net.
I do need the sensors in ST as there are going to be on my STHM - there are 4 which require 4 simulated switches (and simulated sensors will not work in Alexa routines) and that means 8 routines also (4 for close and 4 for open)
For my other Zigbee devices (roller shades) I am happy enough for those to be in Alexa. I have some Shelly sensors and those are Wifi, connect directly into ST without a Hub requirement - if they can get the firmware sorted out I may just get more of those. But the zigbee of course are lower power and daisy-chain is an advantage.

I had mistakenly expected that I would replace the ZBBridge with the Echo and still be able to see the sensors in SmartThings (as it did with the ZBBridge) - the Echo recognizes them a eWelink sensors, but of course they are arent in the Ewelink app, therefor don’t transpose directly into ST via the ewelink linked account.

Simulated sensors DO work as the trigger in Alexa routines, that’s The usual means of integration. But they don’t work as the target action.

So if you use one of those, you can have the real Sensor trigger the Alexa routine and have the routine turn on the virtual switch part of the combined device. And then that will show up in smartthings as a sensor opening and a switch coming on.

And this is what one looks like in the smartthings app: 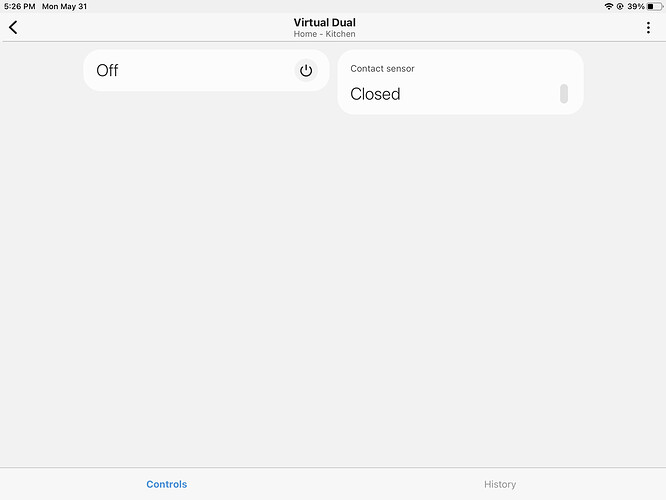 So it’s doable, but it’s clunky.

Yes, I was already indicating essentially same in that a virtual sensor cannot be used as the action (which of course is what is needed) to get the response into ST.
But an Alexa Simulated switch does work as target action.

Yes, I was already indicating essentially same in that a virtual sensor cannot be used as the action (which of course is what is needed) to get the response into ST.
But an Alexa Simulated switch does work as target action.

Sure, and if you use the dual capability virtual device listed in the FAQ you can turn it on as a switch in an echo routine and have STHM respond to it as a Sensor. So that lets you skip a step, which many people find useful.