Recently I replaced my old X10 dimmer with GE 12724 Z-Wave Smart Dimmer and noticed that brightness of 3 GU10 Halogen bulbs I have is not as bright as it was with old dimmer.
SmartThings application shows 99% for dimmer, also manually I can set the same level of brightness.
I double checked wires to make sure that all of them connected properly(line, load and neutral).
Does anybody face with such issue or know what may cause it?

Thank you in advance.

Most likely because your old dimmer dimming by changing the voltage while the GE dimming by cutting out part of the AC waveform. There should be very little different in brightness and you should not be able to tell. Don’t quote me on this since I am only going by memory due to so many type of smart dimmers out there and some are quite interesting.

Thank you for your response. But I would say that difference is around 20% because I still have side lightening in the same room with the same bulbs and other X10 dimmer. I was very surprised to find such difference in brightness and I definitely can see difference by eyes.

The problem is that they are halogen bulbs. As you noted, the specifications for the GE model are for incandescents and CFL’s and dimmable LEDs. They don’t mention halogens because they aren’t fully compatible.

If you want the same brightness you will have to choose a Z wave switch which is compatible with halogens. Leviton makes a couple of universal dimmers which should work. I think Cooper does too, but you need to check the specifications on each model to be sure. Here’s just one as an example, but notice how it specifically calls out halogens in the product description. That’s what you’re looking for. 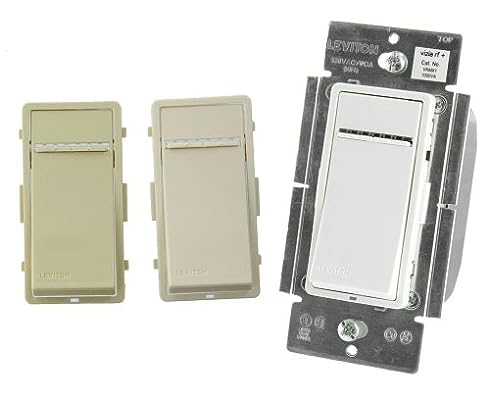 Leviton does have an unusual rocker format which some people don’t like where only the bottom half of the rocker is pressable. So if you think that won’t be acceptable in your house, you’ll need to look for other brands with halogen-compatible dimmers. This is usually a feature you will only find in the more expensive brands, I don’t believe any of the GE Z wave switches support halogens.

Yes, I found that halogen bulbs not working properly so I replaced them with Feit LED 35W Equivalent Soft White (3000K) MR16 GU10 4.1W bulbs. It started working but randomly blinking and light can’t be turned off completely.

I read in other thread that minimum wattage should be 6W for LED bulbs with GE dimmer. So I replaced above ones with EcoSmart 50W Equivalent Bright White MR16 GU10 LED Light Bulb 7W. The last solution works good but when light is turned off there are 2 bright blinks before light is dimming off completely. Also SmartThings application shows brightness as 86% and when I try to set 99% it started going back and forth with brightness and stay again on 86% or 79%. At least light can be completely turned off with these bulbs and brightness as good as it was with halogen bulbs before. Hope this information helps somebody else.

P.S. If somebody knows how to get rid off blinking when light is off or have 99% brightness set I would appreciate your help.

P.S. If somebody knows how to get rid off blinking when light is off or have 99% brightness set I would appreciate your help.

Did you ever find a solution for this? I am having the same problem.