Z-Wave Plus with S2 NOT SECURE

I see. Currently S2 isn’t supported when using Scan Nearby. If you exclude and re-add the device from the device catalog rather than Scan Nearby, you should be prompted to scan a barcode or manually enter information. Doing one of those will allow you to add the device with S2.

That is likely the date sticker. The DSK sticker is probably located elsewhere.

While the switches support S2 security, they don’t support SmartStart yet so there won’t be a code to scan anywhere on the product. The platform should be able to include them securely regardless unless S2 was only implemented for SmartStart devices.

Is the DSK listed on the device?

As illustrated by a Figure 1 in SiLabs’ whitepaper, the user needs to “Enter S2 DSK into
Gateway Interface”. In this instance, that means either scanning a QR code with the DSK info or manually entering the DSK information in the SmartThings app.

If I am correctly remembering a recent Zooz switch pairing I did on my network… I picked the switch through the brand list while pairing and the switch was included securely, with the result in the IDE showing “ZWAVE_S2_UNAUTHENTICATED”. No DSK was used nor any QR code scanned.

It only supports S2 Unauthenticated, which I believe means there is no DSK/QR code https://products.z-wavealliance.org/products/3192?selectedFrequencyId=-1

Good catch Jimmy. You are correct. I think the device in question is this one but it also supports S2 Unauthenticated.

Note: Devices classified as Z-Wave S2 Unauthenticated will add into SmartThings without the need for scanning the QR code or entering a pin. These devices are still using a form of the Z-Wave S2 security protocol.

thanks all. i’ll try to exclude it and re-include it as a specific device w/o a pin and will let you know if it works.

that worked. It did not prompt for a pin, and took a while to include. Here’s the data field: 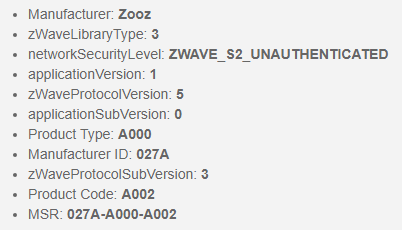 To get S2 do you have to pair with the new app, or is the old app okay?

I tried to pair using the new app and it paired as a thing and not a dimmer switch.

Does pairing with S2 provide any benefit over just being encrypted and secure?

Meaning is the bandwidth Increased or communications more stable?

To get S2 do you have to pair with the new app, or is the old app okay?

Have to use the new app. I want to say S2 has better bandwidth utilization than S0, but I can’t remember where I saw that right now

Remember though you can’t associate an S2 Auth device (switch) with S0 gear (most bulbs from what I’ve seen/tried). If there is a way I’d like to know? (Backwards compatible stated from S2)
“The “S2 Authenticated” class is used for all normal household devices such as sensors and light dimmers. The “S2 Unauthenticated” class is the least trusted class and is only intended for the most constrained controllers that, due to a limited user interface, are not capable of authenticating a node joining the network.”

Have to use the new app. I want to say S2 has better bandwidth utilization than S0, but I can’t remember where I saw that right now

It doesn’t have better bandwidth, but it does have a more terse encryption meaning less data is transferred, meaning better battery life. So smaller messages, not better bandwidth. But the end result is still good.

Sorry to dig up an old thread, but it’s the first one that comes up on the search.

Does the V2 hub support s2? I just got a new switch and when trying to add it it asks for the qr code. I scan it, it “thinks” for a long while and then fails to add securely. I tired using the Pin as well and get the same issue.

yes, V2 hub supports S2. Are you scanning the QR code on the device itself or the box or manual that came with the box? I’ve seen before where the two QR codes were different and one of them was wrong. Tried the other and it works fine.

Well, I guess the fix for me was to wait 3 days and try it again. Go figure.

I just set up 5 new Zooz switches today and they all failed. Some times they asked for the QR code, some times they did not, but they all say that S2 failed. I was scanning the QR code from the box because I actually didn’t see one on the switch. Has this been resolved?

I actually didn’t see one on the switch

It’s usually on the front plate of it. So its covered once you put the switch plate back on. It’s worth comparing the two though. And make sure you are pairing via the z-wave “brand” in the app.