Your Dashboard Ideas are Needed!

If we could get something along these lines it would be awesome! Functional and informative with such a beautiful design language.

I mentioned this before a while back, but ST should draw some inspiration from Plex and how easy they make it to navigate large libraries of Movies and TV shows. I posted some rough examples in that thread for what I would like to see…

My suggestion would be to not deliver a dashboard at first. You should deliver a framework that would allow the community to build and release custom dashboards like we do with SmartApps and Device Handlers. After the community builds a few dashboards you can make a few of them standard and allow the users to select which one they want to use or switch between them.

You will never find agreement on a single dashboard.

I don’t want a dashboard that has actions on it, I would prefer status. Others will want to control their home from the dashboard.

They have to come up with something. While I agree with your approach, SmartThings, being a mass-marketed product is positioned to the average consumer. Those people cannot and should not be expected to join a discussion forum in order to make their system usable. It must work out of the box and have a reasonably comprehensive dashboard.

I have no issue with allowing the community to create their own. I would personally make use of one but the reality is that I would bet only a fraction of ST users actually come here to get code. Most likely just use the pitifully limited selection of SmartApps available in the marketplace.

If we could get something along these lines it would be awesome! Functional and informative with such a beautiful design language.

What App/Vendor is your screenshot from? 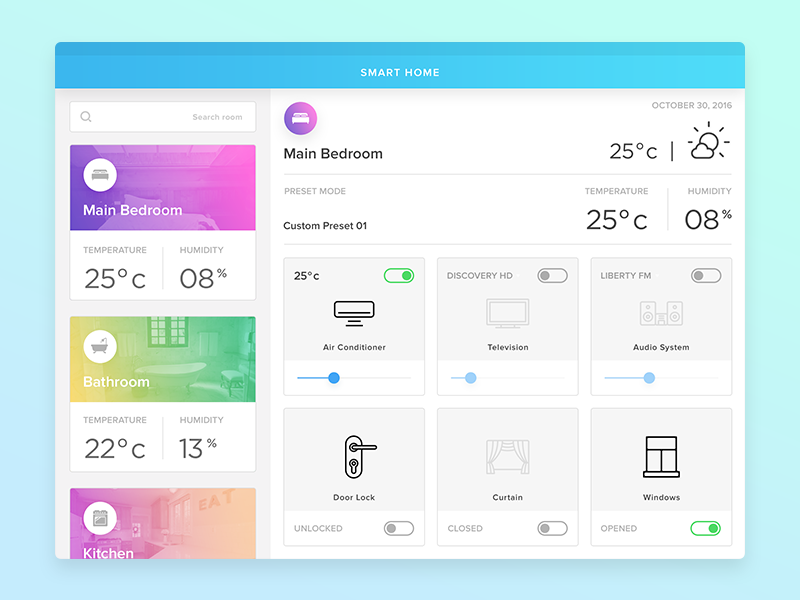 I saw it at the above link this morning and immediately remembered this thread.

I saw it at the above link this morning and immediately remembered this thread.

Well… That’s a great “concept”; Dribble is all about great graphic and user experience ideas. Implementing such an interface is tremendously more effort than just drawing it.

No doubt! But I think both are equally important. For example, why does the smartthings app not have a set of icons I can choose from to set for each room, the way they do for individual devices? To get an icon I have to take a picture? Most people’s homes are picture perfect, including icons would have been nicer, much nicer than than the current default grey circle

For example, why does the smartthings app not have a set of icons I can choose from to set for each room, the way they do for individual devices?

Because it is easier to describe such a feature than:

why does the smartthings app not have a set of icons I can choose from to set for each room, the way they do for individual devices? To get an icon I have to take a picture? Most people’s homes are picture perfect, including icons would have been nicer, much nicer than than the current default grey circle

For the same reason @tgauchat mentioned above. It takes quiet a bit of effort to go from concept to working code. Quiet a bit more effort to take working code to the level that works well.

ST has been given a lot of good ideas. How many will make it to the consideration phase? Or is this just a futile attempt to appease users and make them feel like they are contributing to the future layout?

I can understand that, but I’ll reference the pic I posted a few posts up. It has a very clean and appealing way of indicating each room individually. It doesn’t even have an icon per say, but the overall design makes it light and pleasing to look at vs a utilitarian grey circle. I can understand your statement on design, but in terms of agreement, that’s why you have head designers and those who work under them. If they can’t design and agree on simple icons, what does that say for the project on a whole?

this is a similar format to what I use. no real reason to have “rooms”. I think speed is the main issue. it takes forever to load and check the status on things. I use Alexa for most basic operation as it is much quicker. The app is great to let me know if a door has been opened in the night or if I left something on or unlocked.

If they can’t design and agree on simple icons, what does that say for the project on a whole?

Don’t ask a “rhetorical” question that you already know the answer to…Don’t you?

I loved Smarttiles BUT more importantly my wife wanted me to get raid of Smartthings after I wasn’t able to use Smarttiles anymore.

A few months ago Smarttiles required users to log-in every very days which was frustrating for my wife because IDE password is not easy.

I really want to mount a tablet beside a front door for easy entry and exit but with smarttiles down i can’t do it right now.

I don’t know of any other HTML solutions.

I would like to add one more point. There is no Windows App.

The reason this can be useful if I’m working from home or my cellphone dies.

Smarttiles was great on the computer… Now I’m trying to find an Android emulator to run smartthings.

agree that needs to be customizable, but still simple enough for everyday consumer. And, it is currently far too slow to be truly useful. I find myself almost exclusively using the iOS widget (even adding shortcut buttons on there)

Status and ability to change from there is key. Optimizing what they have today and adding status for contacts, temperature, lights and quick ability to click to respond to them would be good at the very least. And making a version that is optimized for tablets so it can take advantage of the extra space.

Design is HUGE. While I like current SmartTiles function a lot, I think design could be much, much better and an adjustable UI that doesn’t require coding knowledge would be great (resizing tiles options, grouping of tiles/sections, dynamic colors, backgrounds, gradients, icons). Current SmartTiles themes (even the custom community ones) are not something I’ll be super excited to put on my wall-mounted tablet but they do the job for now. Would like to see a beautiful theme that would auto-adjust to a night-time theme after sunset.

Also, on Tablet or desktop: would be great to have the ability to add in frames for other content. Such as my AirFoil speakers selector, Spotify controller, DirectTV controller, family pictures. I realize this would be considerably more effort & not everything would be supported, but I would really love to move toward a Tablet Dashboard option that really could control my entire house within a unified interface…isn’t that what we all want?

Is Action Tiles complete but just waiting on Smartthings approval?

Love it. Yes, I’m excited to see what you are doing in V6 but I know it could be a ways out as you don’t have a release date yet. Keep up the nice work!

Btw, I believe there has been some discussion of charging for the next version…just wanted to add my two cents: I will happily pay a reasonable price for a good product that serves my needs. That said, I’d prefer a one-time payment for the license. I like that SmartThings isn’t a subscription based platform as that was a big draw for me doing HA in the first place and I think a subscription price (per device and/or monthly) would get old for me real quickly. I’d like a trial period for 2-4 weeks and then require a purchase for a license after that…Just my thoughts.

Thanks for filling in some of the smarthings holes!

We think SmartTiles could be much, much better too

SmartTiles is awesome. My only critique, supporting Paul, is that it could use some visual design love. The biggest challenge I’ve had when designing to various devices is creating a common visual design language that works for every device type. For example, a motion sensor may only show motion… but it might also show temperature… but do I care to see both? Sometimes yes but not always.

Or a lightbulb. I can turn it on, off, dim it, change color. What’s the best visual language to communicate all those functions? I think Apple does a good job by incorporating 3D touch on a device to expose other controls and I can quickly dim a bulb without going into a device detail.