Does anyone use a long usb cable that is flexible similar to what came with the camera? I want to install a camera outside and it’s easier to hide the thin flex cable.

I am using the original cable and a 4 foot extension. Easy to hide behind my siding moldings. I wasn’t able to find a flat cable the length I needed.

I was able to push the flat cable up under the siding where two pieces meet, using a plastic putty knife. That is on horizontal runs. On vertical runs my camera was very close to a corner molding, so I slipped it behind the corner molding and used my hot glue gone to anchor it in the corner and hidden.

@Automated_House, Thanks for the Ideal, that solved my problem with the Wyze Cameras. Just using the IFTTT from Wzye was to big of a hassle. Would only work on my phone but if other members of the family were home it would still turn on the motion. Your way it arms the motion with a routine… Perfect! Thanks…

Need some ideas for viewing in ActionTiles. Here is the problem. Everyone raves about TinyCam Pro on Android, so I bought a Fire HD 8 Gen 7 installed the play store and bought and installed TinyCam Pro. Followed all the install instructions and before I could even view a camera it crashed. Tried many times it opens, I press the manage cameras to add a camera add it crashes. I didn’t give up I installed BlueStacks on my Mac installed the play store and ran TinyCam, this time it crashed when opening the app. I now need another option to get these cameras into ActionTiles. Any ideas?

I installed Bluestacks on a win10 i5 pc then once installed typed wyze in Bluestacks app search. Installed wyzecam app and I can use it within Bluestacks. Have not tried to view in ActionTiles though.

I installed Bluestacks on a win10 i5 pc then once installed typed wyze in Bluestacks app search. Installed wyzecam app and I can use it within Bluestacks. Have not tried to view in ActionTiles though.

@RBoy your integration of the Blink cameras was a thing of beauty! I cant express how disappointed I was to see thatbe disabled by the manufacturer. I am chiming in on the ‘me too’ list. Wyze camera integration would be awesome.

It is with custom firmware.

As far as I am aware, it’s identical hardware.

The Xiaomi xiaofang I think is the same as the V1 WyzeCam. V2 has upgraded hardware.

Did anybody use TinyCam Pro or free version with the WyzeCam? I bought one and was using TinyCam to record events and upload to my Amazon Cloud which worked really well and basically bypassed one of the biggest flaws of this camera, which is the 5 minute cool down period after a motion event occurs. The problem I was having was most of the time I would walk by the camera and be out of the frame before it would start recording. One time the delay was 8 seconds. I tried to email TinyCam support, but never heard anything back which ultimately let me to return the WyzeCam. Was wondering if anyone else had this problem?

These cameras are great not necessarly for smartthings, but am slowly replacing my Samsung smarcams with these. Especially now there is a waterproof cover for pan tilt cam.

DO you mind sharing the cover you are using for the wyze pan? I have been looking for one 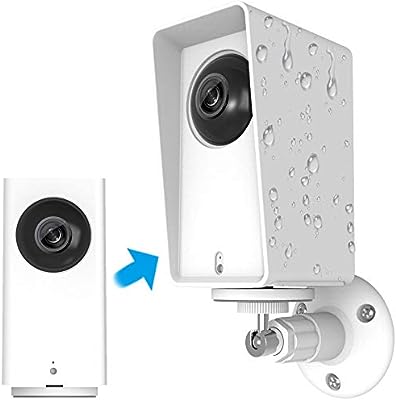 Does this still allow the tilt and rotate by remote?

Yes condom that fits over top