I bought this switch from Amazon , which I’ve used to replace the in-wall light switch in my office, which originally controlled only the ceiling light. My goal was to extend the capability of the switch to control the ceiling light, as well as two additional lights controlled by Z-wave plug-in modules. What I found when I opened the switch-box is that instead of having the required 3-leads (load, line, and neutral), the switch was wired with only 2-leads (line and neutral apparently).

I installed the switch anyway, hooking the white lead to the Neutral terminal on the Jasco switch, and the black lead to the Line terminal. The switch powered on and controls the two floor lamps with Z-wave plug-in modules perfectly. The problem is that the ceiling light is no longer operable.

I thought I might be able to resolve the situation by running a lead between the Load and Neutral terminals on the Jasco switch, but this results in the ceiling light coming on briefly for a moment, and then going out, which is followed by normal operation of the two Z-wave tethered floor lamps.

Has anyone else faced this problem? Is there a solution at the switch-box, or am I going to have to re-wire from the ceiling down through the wall (I’ll probably live without the ceiling light before I do that!). Thanks for any help/advice.

I am trying to wrap my head around the two additional lights. At first I thought your old switch was power from the light.

As you can see the switch only breaks the circuit to turn off and on the light.

If you do have a power from the light then hopefully someone else can give you a work around!

Thanks for the reply @sirtaran. The ceiling light in my office is wired exactly like the diagram at,

But that’s only 3 leads coming into the switch. If you’ll notice in the wiring diagram on page 5 of,

There are 4 leads coming into the switch: Ground, Neutral, Line and Load. It’s the Load wire that’s missing from my office, and it’s essential to close the circuit between the Line and Neutral to feed the light. I appreciate the effort though.

I was afraid you had power from the light. Honestly it makes it easy when running switches just to wire it that way! When I wire I always tie my neutral in the gang box. It requires two runs into the gang but I always have the neutral then.

To keep it simple I would order one of these: 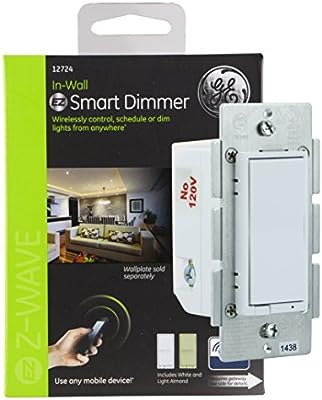 Use an incandescent bulb and call it good. Save your other switch where you have the neutral in the gang. Sorry I could not be more help but when it comes to safety this is the way to go.

@sirtaran: Yup, that was my backup plan if no one had a solution to make the relay switch work. Thanks for helping confirm the right course.

Okay, I think I know what’s going on here. First, as was linked above, I think this is a good pictures of what you have going on:

As you can see here the black and white in the switch block really aren’t black and white, they should be black and black. One is line coming in, one is load going out. Instead of sending out power along the load though, you are sending neutral along the line. The switch sends a trickle of power down the neutral, just enough to keep the Z-wave radio going. This isn’t enough juice to light up your light though. However, if it was, your light would always been on because it’s always sending some juice along that neutral line.

However, when the switch turns on, it tries to send “full power” along the load line. This is the power that should light up your light, but obviously it can’t because the load on your switch isn’t connected.

So, what’s the solution? As Lucas suggested you could get a 45612 which doesn’t require a neutral. However, one thing to note on these is that they are only supposed to be used for incandescent lights. They may work for LEDs, but won’t for CFLs.

If you can run a neutral line down to the switch, that would be ideal.

Thanks @chrisb for the further clarification and confirmation of what I suspected. I really don’t want to run another line from ceiling down to the wall switch box, so I’m just going with the dimmer switch as the path of least resistance. I’ve converted the majority of the lights in my home to dimmable LED now anyway, so the dimmer switch should work just fine. My only reticence about the dimmable z-wave modules is that they seem quite a bit slower to respond to simple on/off commands than the relay switches. I guess they need to first check whether it’s a dim command vs. an on/off command, which doesn’t seem like it should take that long, but the delay is still noticeable. Thanks again for the feedback.