Why did Samsung abandon us?

The panel is clearly made by 2gig. The least they could do is give us some support from their side to migrate to their platform.

2 gig (Nortek) makes many very similar or even identical looking panels which have completely different radios and firmware inside. They don’t, however, provide a monitoring service: they are a hardware company. You go through one of the many service companies to actually get monitoring service, with one of the most popular being alarm.com.

In this particular case, the smartthings/ADT dual logo panel uses a radio which is not used for any of the other 2gig products. And which only works with the matching dual logo sensors as far as the security features.

The best you could do would be some kind of reset so that you could use the separate Z wave radio inside. But those devices aren’t normally used for security. it would make more sense to go with a different monitoring model from a different company that actually had security features.

In any case, 2 gig is very far removed from the business arrangement which resulted in people buying a SmartThings/ADT monitoring kit. It would be like going to the tire company when your local transit authority discontinued your favorite bus route. There’s just not much they can do.

I think what would be nice if they could do it even if it would be a bare bones firmware to enable basic features. Now i have no idea if that makes any sense. But if anyone could provide that help they are our best bet at this point. It is a long shot though. And i dont expect it.

Only the ADT motion and Door/Window sensors are proprietary and need the ADT Smartthings hub.

What about the smoke detector? And I’m pretty sure the key fob is that same proprietary protocol, because it works without the Internet and doesn’t work with any other smartthings hub model.

You are right about the keyfob. I forgot about that. I remeber there being discussions about the co2 and fire. I thought it was confirmed it wasn’t proprietary but i just checked the Hubitat compatibility list and it isn’t on that either.

Well they are abandoning all V1 hubs. Of which I own 2.

I agree. I feel the same way as I pretty much finished my installation by hardwiring my last camera 5 days before getting the email. Considering the cameras are so cheap right now I have to wonder if those are up for retirement soon as well.

Does anyone know exactly how the the ADT panels will function on June 1? Will they be bricked or will they still function as a local system? Or maybe it just won’t have an internet connection and constantly give the warning about a lost connection? I know they’re phasing out the weather forecast and ability to add new sensors in a couple weeks so I have to assume it’ll be pretty much useless in June.

Well, I verified all of my equipment aside from the ADT / Smartthings dual branded sensors and of course the hub is compatible with Hubitat, which does everything more or less locally. I still have my v1 Iris contact sensors and a couple of boxes of batteries for them so I should be good to go there.

I only had one ADT / ST motion sensor that worked, and it came with the kit, and was never part of the security as we have pets so indoor sensor would be a bad, bad idea…

I’ve used Samsung for computer parts professionally, for smart Phones since my first one, for TVs, stereos, etc…

I’m done. I know I won’t make a significant enough dent in their bottom line to matter in the slightest, but I figure if I just keep putting up with bad behavior from these companies it just encourages more of the same.

I guess it is past time for me to seriously look into more open source and privacy focused platforms. I do that with general computing, I should with this purpose built stuff as well…

So I’ve looked inside the ADT smoke alarm and it has a fairly big chip that can be pulled out. I believe that’s the radio that connects it to the panel. When looking at the fcc pictures (or Patent pictures, can’t remember) it’s the same size as the one for 2gig and looks like it can be interchangeable. The 2 gig smoke alarm has a similar looking chip, so I’m wondering if the smoke alarm is exactly the same with the exception of that chip.

If you pull it out, the SmartThings panel will say that it lost supervision of the detector. I can’t find any posts from anyone talking about that chip.

You can find it by twisting the alarm from the backing and it’ll be the part that has/had a QR code on it and has a little white wire that’s probably the antenna. It pulls right out and has 6 pins.

This also makes me feel that the detectors will still work, but just not transmit anything when they’re discontinued. I’ll probably still use them since it doesn’t technically expire for like 6 more years.

Probably, for the reason you gave, but I haven’t heard for sure. It would be good to verify that one with ADT (I’d expect their support to be more reliable than Samsung’s in this regard).

ADT’s support has never been helpful in regard to the ADT Smartthings system. They always transferred me to Samsung and Samsung would transfer me back to ADT.

This also makes me feel that the detectors will still work, but just not transmit anything when they’re discontinued. I’ll probably still use them since it doesn’t technically expire for like 6 more years.

I know for a fact that the CO detector works when not connected to the panel. I had disconnected everything and left them in a box in the garage and the car exhaust set them off.

Thanks for bringing this up. We’ve tested this and confirm that the smoke and CO detectors will alert even as standalone devices. All the best!

I’m thinking of switching to Ring as well. Not sure how customizable the automations are. With SmartThings ADT I’m able to have it when the smoke or carbon monoxide goes off, the tv mutes, a light turns on and the door will unlock after a minute. I’ll miss having a touchscreen as well, but that’s the nerdy/fancy side of me. Maybe I’ll check out ADT pulse as well.

I’m thinking of switching to Ring as well. Not sure how customizable the automations are. With SmartThings ADT I’m able to have it when the smoke or carbon monoxide goes off, the tv mutes, a light turns on and the door will unlock after a minute. I’ll miss having a touchscreen as well, but that’s the nerdy/fancy side of me. Maybe I’ll check out ADT pulse as well.

The ring system itself doesn’t have any automation, but you can use Amazon echo routines pretty effectively for some things. I know you can get a notification for the smoke alarm, but to be honest I’m not sure if it works as an automation trigger or not.

I just love it when a company releases intuitive features that make sense! A couple of months ago in my Ring Alarm Review I mentioned that it would make a lot of sense if Ring/Amazon would allow for the Ring … Continued

If you’re considering ADT pulse, I would also look at abode.

I just checked ADT pulse and that $62 monthly bill seems steep! Lol!! Especially for something I’ve been able to do for free. I’ll check abode too, but I don’t think they have a keypad, which is something I’d like to have. Don’t want to always have to pull my phone out to turn the alarm off. Too bad you need a service to use 2gig equipment.

I’ll check abode too, but I don’t think they have a keypad

Arm & disarm your system with the familiarity of a keypad. This keypad also detects motion and shows you system status. 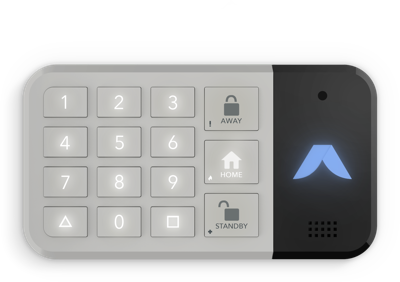 Cool! Now I have to weigh my options.

Not sure I’d switch from one cloud based system to another.

The only reason I have st at all at this point is because it supports cameras and doorbells well.

No, Abode uses its own proprietary protocol for the self branded security items, as do many low cost security systems. In part it’s to discourage hacking. but their hub also has a Z wave radio and a Zigbee radio, like SmartThings, which is then used for Home Automation.

The system runs primarily locally, although they do have a nice consumer friendly app and they do have integration with Ifttt and various voice assistants, so those pieces are cloud-based.

So in that sense it’s similar to the smartthings/ADT dual logo system and that the security system is not cloud dependent and also has an optional cellular module for communication with the monitoring center.

It does charge a monthly fee, although one which is much lower than ADT’s.

So I mentioned it specifically in the context of the ADT/smartthings dual logo system, and particularly as a candidate for those looking for the similar security features in that system which are not available on other smartthings model hubs. Like the ability to arm and disarm locally.