I’m considering ceiling mounting all my echo dots using a recess mount. But just had a thought. What happens after a few years when Amazon by that time might be few generations ahead? I’m concerned what if they completely make the older dots not work? Or will they always work but might not benefit from new features etc?

What happens after a few years when Amazon by that time might be few generations ahead?

Don’t believe anyone here on the SmartThings forum can answer this question. I could ask the same question about a lot of things I buy like what will happen when the TV I mounted in the wall dies, will my current mount work. Repairing drywall is cheap so if you do mount them to the ceiling and the design or size changes for the Dots that make your recess mounts incompatible just repair the ceiling. It’s a risk you take in today’s world where technology only lasts a handful of years.

@JDRoberts has said it very well many times in this community:

Is SmartThings falling behind?

I gave up trying to “future proof” for home automation about a year and a half ago. The technology is just changing too fast.

Instead, I shifted to a mobile phone type model. I set aside a certain amount of money each month to pay for services and equipment, and I buy each individual device expecting to replace it in three years. And that includes the hub. If I end up using a device for longer than that, that’s a bonus, and I have more money in my home automation budget to play with new gadgets

I wouldn’t ceiling mount them. There are too many times that I have to hit the mute button on the ones I have scattered all over the house. Plus, they are so small, that you can tuck them in a corner and they are out of sight, out of mind.

A recess mount would greatly reduce the ability of a Dot to understand a spoken command and to use the Amazon positioning protocol to identify itself to the other dots as it is using a circular 7 microphone array. So you will find the QOS (quality of service) much worse in a recessed mount.

Thanks for the replies,

@ritchierich has a good point I guess nothing lasts forever. But my concern is not really as to when it damages but how long and after how many generations of new Echo’s will Amazon stop supporting old devices? as it’s a cloud based service I guess Amazon can do whatever they like. But it’s like having a really old iPhone, although you cannot download certain apps because you can’t get a new OS for that phone at least Apple don’t stop you using their services like Siri and stuff. So question would be will the echo’s as they age get kicked off completely from the service.

@rontalley good point but I won’t have that issue as my house ceilings are very low and I can reach the mute button easily.

@JDRoberts I did have a look at that and the mount I have does not block any of these mics. The mount as a lip where the echo dot just sits on. The lip is so small it even does not block the light so works really nicely as an ambient ceiling light too. I tried it out by mounting it on a box and left it far away and it still picked up my voice. Below is a pic of my mount, you can see through the grilles where the mics are positioned. 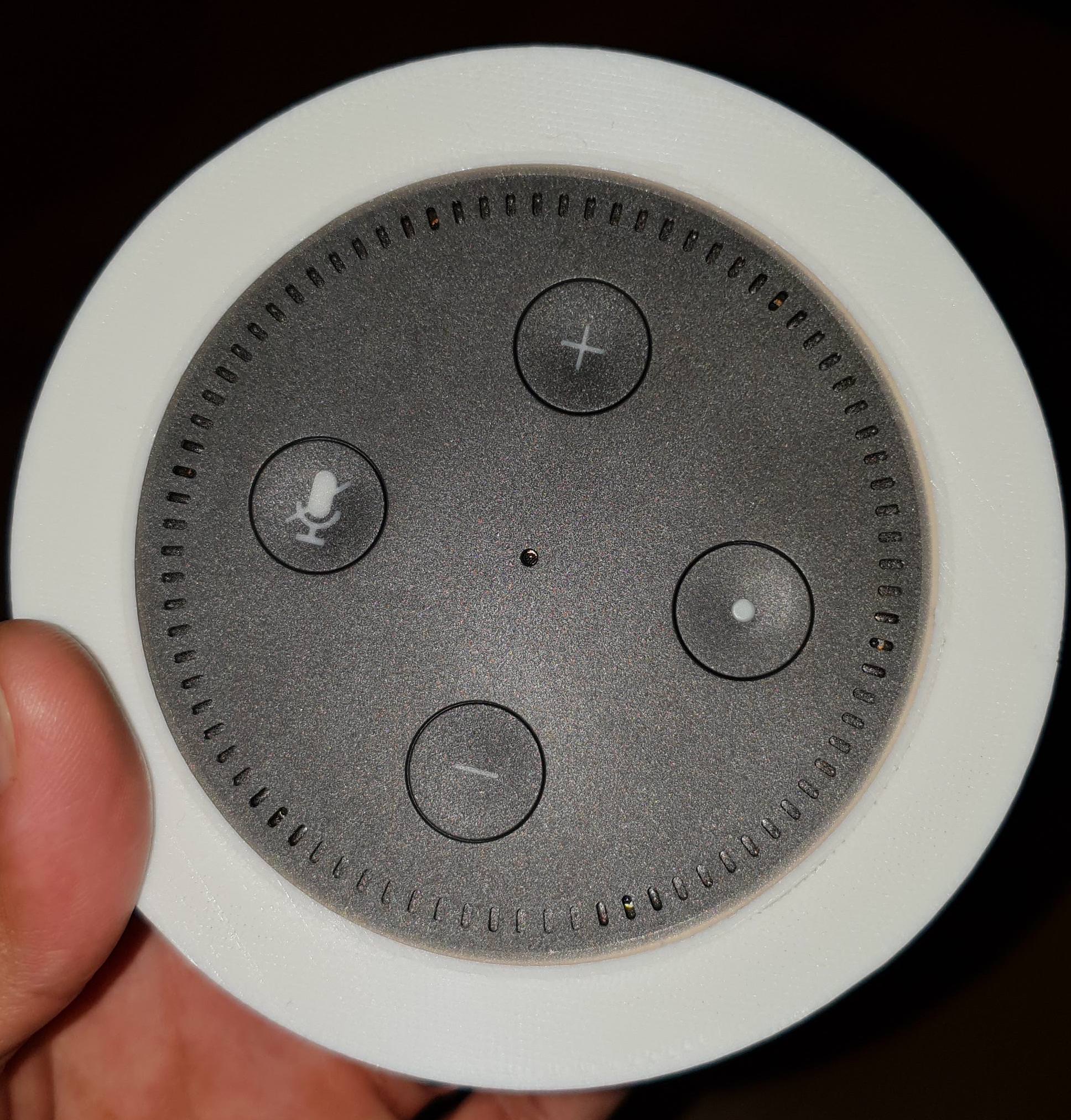 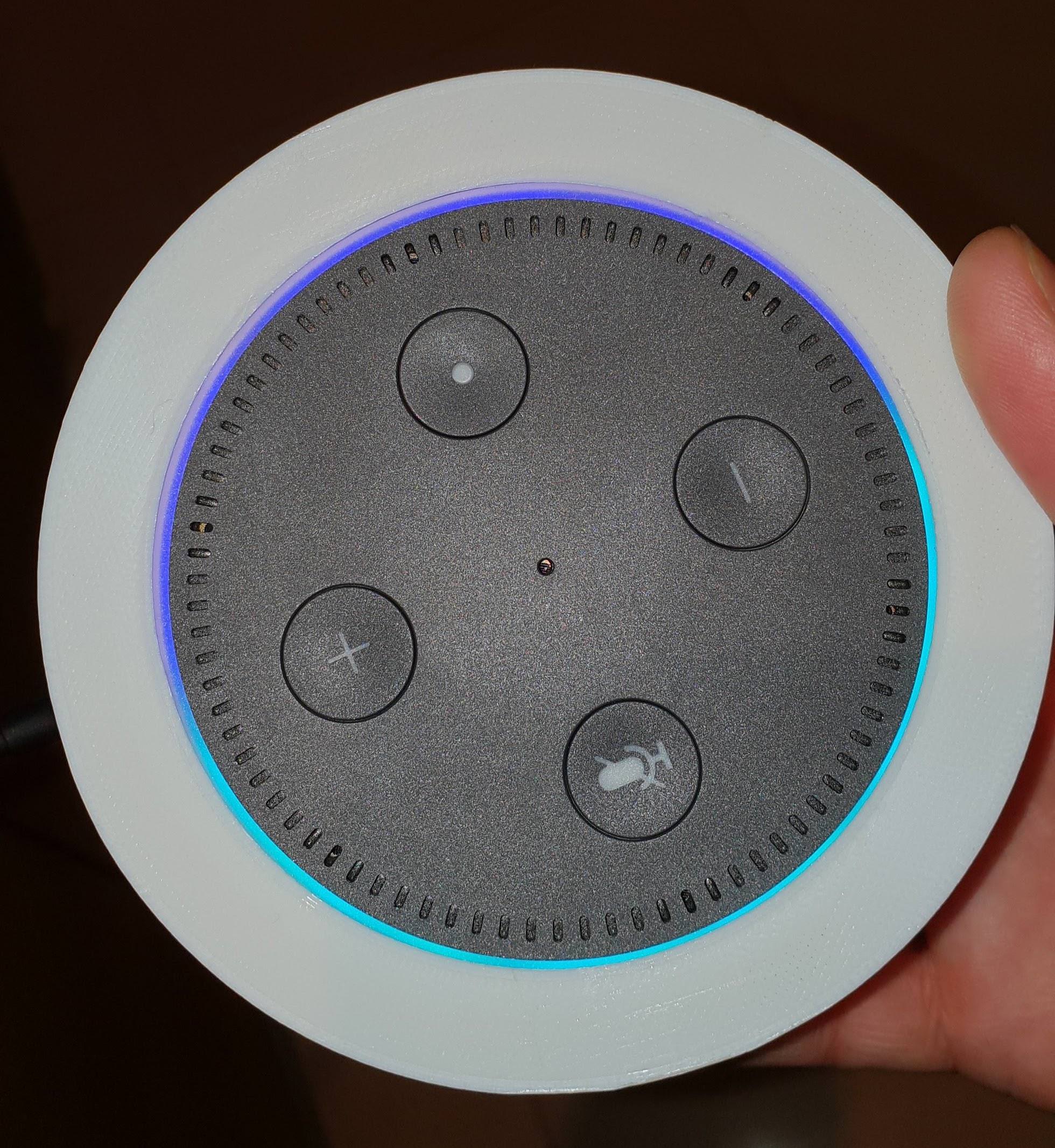 You can certainly try and see if it works.

I always worry about overheating in devices. I will offer though that I’ve had a Dot in my garage (surface mounted on a wall) all through summer and it’s still good. I’m in Texas - my garage can approach 105degs at times in the summer.

I did think about the heat issues too. But i’ve had one mounted in a recess for about 8 months now and with the ceilings here in the UK, it’s a cavity so plenty of airing space in there. From time to time I lift the echo dot to feel how hot it is and its hardly warm at all so I don’t think it will get that hot to overheat. I’ve gone through summer where the room got really hot but the echo was actually cooler as it was venting into a cavity

It’s 3D printed, I can send you the 3D file if you have someone that can print it with good plastic. I’m going to be installing a few in a few weeks again will try and make a video. But the install basically involves drilling a hole somewhere where there is no obstruction then placing a wireable socket in the ceiling plug in the echo dot, then push the mount in, secure the mount with some straps or springs and then drop the echo into the mount and the echo sits on the lip that the mount has which prevents the echo falling down.

the 3d printed one I have actually looks very much like that chrome one. I’m going to use downlight springs to hold it in.