We love Wink’s smarthome hub and have recommended it highly in the past. But the Wink Hub has been “temporarily unavailable” in stores for over five months now, and Wink won’t say why. What’s going on? Is Wink done for?

It couldn’t be any more obvious that Wink has less than a 1% chance of survival.

Well… I suppose we could broadcast the prediction over the Presidential Alert System.

could broadcast the prediction over the Presidential Alert System

I expected that Hawaii Emergency Management Agency would have sent it already!

I think will.I.am wants to merge with Iris.

Is Wink done for?

Which begs the question how much longer the sole survivor of the smart home hub scene will be able hold on. Looks to me the days of stand-alone hubs are gone.

Is Wink done for?

Which begs the question how much longer the sole survivor of the smart home hub scene will be able hold on. Looks to me the days of stand-alone hubs are gone.

Insteon and Homeseer seem to be doing fine, but they are aimed at a somewhat different market. Just the fact that they cost considerably more gives them a bit more of a safety margin.

And then many of the “home automation as a service“ companies are still using a standalone hub, but it’s professionally installed along with whatever other bridge devices are required. Vivint, Xfinity home, ADT Pulse or their new Life360 subdivision, Control4, even smartthings in Europe through Vodafone. But again, these have a much bigger profit margin and are professionally installed which reduces customer support costs to the company.

It looks to me like the market segment which is in danger is the standalone under $200 DIY hub. There’s a lot of market pressure coming from the less powerful but also more reliable solutions: Amazon echo, HomeKit, and whatever Google assistant ends up being. HomeKit and echo are essentially add-ons to other services which are profitable for their parent companies.

There’s also some pressure coming from yet another market segment, the lower cost home security systems like Abode, Ring, and Alarm.com, which again have bigger profit margins because of their contract monitoring service.

Maybe smartthings will end up being an add on to Samsung’s smart television/appliance business. If so, it probably won’t look too much like it does today.

Which begs the question how much longer the sole survivor of the smart home hub scene will be able hold on.

At SDC and various other times, Samsung/SmartThings has firmly insisted they are not a “Hub company”.

SmartThings = The “SmartThings Cloud” (just like Amazon Alexa is not just the Amazon branded Echo, Echo Pro, Echo Show, Dot, and Spot hardware: It is an entire AI ecosystem.

I’m not sure the topic is “settled” at Samsung HQ, but there a bigwigs there that perceive that the next big step in SmartThings should be melding with Bixby.

But neither platform is ready for that step. 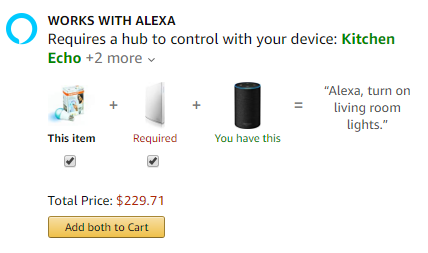