I had 1 group of lights connected/load from 2 locations (staircase - upstairs & downstairs). I planned to change the current switch to zwave switch. I can find neutral wire in upstairs but not in downstairs. So my question as followings:

There are multiple different ways to do this. @anon36505037 is in the UK and has done his entire house with fibaro in wall micros, including in some two-way setups. He can probably give you some good advice on your alternatives in this situation.

The reason I planned to change to zwave switch for staircase is because my zwave signal can’t pass to second floor thru staircase. Maybe putting Fibaro relay behind the lights can help to repeat the signal to second floor. Otherwise aeotec bulb is my last option.

Thanks for your reply. Will figure out my current wiring structure and let you know again. Basically image attached is my staircase layout, It’s already 2 ways setup wiring and all wiring is inside the wall (not ceiling rose). My idea is to put Fibaro relay inside one of the lights fixture and attach Aeotec LED bulb (zwave). My concerned is in the case when user press the switch off, does it actually turn off Aeotec Bulb? My intension is to activate 3 of them to repeat the signal to second floor. 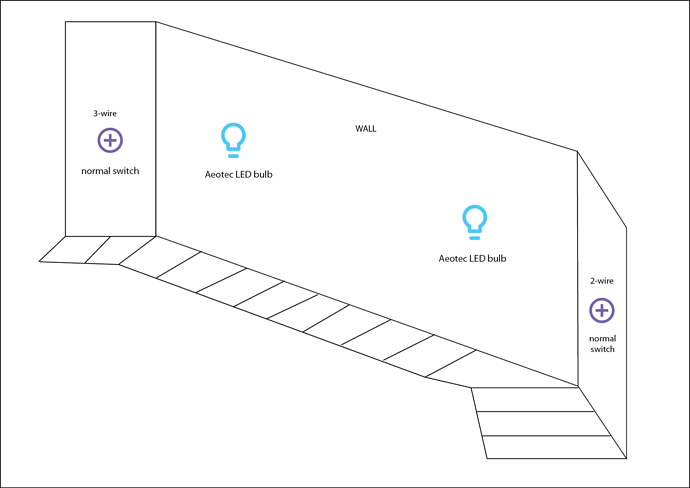 I having signal issue in second floors. All the zwave switches and sensors are not responsive at all time and most of the time not able to control (repair zwave network failed). Not sure is because of iron stair railing to affect them. I had an ideas to apply to staircase:

It’s pretty common to use a zwave bulb on a stairway where it’s not possible to use other repeaters, for example, going down into the basement.

Some homes have architecture which makes it very difficult to get signal through particular walls. These can include materials like brick, cement, or Adobe. It also includes walls made of plaster laid over wire lathing. Foil wallpaper or foil backed insulation inside the walls can also be problematic. And when going to sub levels, water pipes in the floors create the same sort of problem.

So while it’s not usually a good idea to rely on a zigbee bulb as a repeater for other ZHA devices, A zwave bulb can indeed be a helpful repeater for a Z wave network. They are also used in garages where you want to lift signal up above the level of the automobiles.

Of course, this will only work if the Z wave bulb is always on power, but a battery operated switch would solve that.

Just remember that zwave is limited to a maximum of four hops between the end device and the hub, so if you’re trying to bounce signal around corners throughout the entire house, you may need to do things differently.

Oh, and as @anon36505037 mentioned, it’s not going to be helpful to have the micro relay controlling the current to the bulb. Your other idea of the battery operated switch is better. I also agree with him that since you’re talking about a bulb in clear air, it should cover the full range of the staircase just fine. So use battery operated switches to control the zwave bulb that is central.

Now you have to figure out what’s going to catch that signal at the bottom of the stairway and get it into the next room. There are a couple of other of options there.

If you’re just looking for a repeater and there isn’t a receptacle that you can plug something into, I could see your idea of putting a relay on the bottom switch but not actually using it, just letting it repeat and putting a battery operated switch near it to control the light.

That should work pretty well. You’d be using a fairly expensive device, the Micro, at the bottom of the stairwell, solely to act as a repeater into that lower room, but if you’re OK with that cost, technically you should be fine. The lightbulb would bounce signal to the relay that you aren’t using for anything else except a repeater. And the relay would bounce it into the lower room.

But you do end up with four devices, then: the lightbulb in the middle of the stairwell, battery operated switches at both the top and the bottom to control that light, and a relay at the bottom inside the wall to act as a repeater.

This is where we get into one of those “all home automation is local” situations. The relay will act as a repeater, that’s true. But if your wall has that foil backed insulation or is made of cement it may be really hard to get signal to a device inside the wall.

You probably already know this, but battery operated devices generally do not repeat. So the question would be whether instead there’s a place to put a pocket socket that could still catch signal from the lightbulb.

So as far as the micro goes, it’s intended to act as a repeater, but if you’re already having problems getting signal through the walls there’s no question that the device inside the wall may have more problems that a device that’s just a plug-in.

You may just have to try it and see.

I hope in the futures that SmartThings can come out a device which can extend Hub capability thru LAN but without adding different location/account, so that at least can solve some case in the house only can find LAN port but difficult to getting zwave/zigbee signal.

You seem to be promoting your WisQo stuff quite a bit in the community here. How is this switch going to work in the UK, when it needs a neutral wire? And also, is there ANY compatibility with SmartThings, at all?