I was looking for a voice notification “Window in Master Is Open”, “Back Door Is Open”, but i culdnt find any simple solution.

I bought the Samsung WAM1500 Radiant360 (https://www.amazon.com/gp/product/B01BVXNUI8/ref=oh_aui_detailpage_o04_s00?ie=UTF8&psc=1) and when i set CUSTOM new monitoring rule, after i choose AUDIO NOTIFICATION it let me choose any custom message i write. AMAZING !!!

I even had a motion sensor in my driveway and now my speaker say "Someone is coming… (-: "

Any ideas?
I try to set up routine called ALARM ON but i couldnt have custom text.

( since this would be solved with a smart app, I’ve moved this to the smartapp ideas category where more people should see it who will be able to help you.)

I can think of a couple of different ways to do this, but they are all a little MacGyver-ish. I don’t know whether core can do this directly or not.

Anyway, hopefully someone who already has this working will chime in. If not, we can start brainstorming some of the other options.

Sounds nice…I’m doing the same (door open notifications for doors and garage) via Tasker/Google Home, but that takes a bit of setup to get working.

From a HW perspective there is also this option (similar ability to announce when sensors are tripped) for about $50, but sounds like the Samsung speaker allows customizing the response, which the doorbell does not AFAIK. 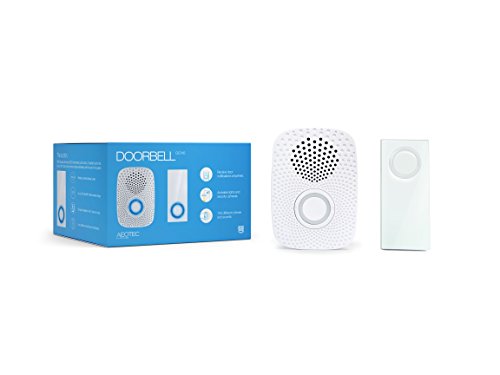 Doorbell from aeotec makes your front door a part of your connected home. A two piece package, it offers an 80Db speaker for inside your home along with a wireless button for outside of it. Both LED l ...

The doorbell would have the same issue that the OP has run into with the Samsung speaker – – most of the SmartThings features, including smart lighting and routines, don’t let you set a trigger to activate them just because the smart home monitor armed state changed.

But I’m pretty sure core can, I’m just hoping one of the core experts will verify that.

Then the question is whether core can do the text to speech alert itself, or whether you would have to daisychain it to another smart app.

I use the Aeotec Doorbell but the Samsung speaker is so much easy to configure your announcements.
I am very surprise that other people didnt mention this simple solution.

The text to speech notification feature in SmartThings has broken two or three times over the last year, sometimes for a couple of weeks at a time. When it broke, it didn’t matter which device you had, Samsung or Sonos or whatever if it used the SmartThings TTS service. So some people use TTS for voice notifications and some people don’t. The doorbell wouldn’t be affected by it because you upload your own custom sound file.

I’ve been wanting to do something like this. So is it pretty much as simple as adding it as a Samsung Multiroom audio then under the SHM monitor rule tell it to send TTS to this speaker? How is the speech? is it pretty natural like Google Home etc? Looks like there are some Refurbished units available so I wanted to confirm before purchasing. Thanks

If your up for a more complex install give EchoSistant a look… New version coming soon that has a ton more features, but as it is now it wink do what you want.

I am using a Samsung R1 (refurbished) that I found on online for about $50 primarily to do those type of notifications. I use the “Speaker Notify with Sound” app and it’s been working for me since November, with a couple of caveats.

Temporary work around is to set your R1 speaker to a comfortable volume then remove “Temporarily change volume” from each rule. Front door sensor, back door sensor etc… Hopefully ST will have this resolved soon.

In short, Notify with Sound seems stable now, and works for what I need, understanding the above quirks

On the ‘Macguyverish’ side, all this can be accomplished right now using an android tablet with sharptools and Tasker. In sharptools you can subscribe to any event or state change of any device, and use it to drive other events and state changes. As a bonus, the notifications can be read out loud by that same tablet… or sent via Bluetooth to your speaker.

On the ‘Macguyverish’ side, all this can be accomplished right now using an android tablet with sharptools and Tasker. In sharptools you can subscribe to any event or state change of any device, and use it to drive other events and state changes. As a bonus, the notifications can be read out loud by that same tablet… or sent via Bluetooth to your speaker.

@joshua_lyon can SharpTools act on a change in SHM armed state, such as changing from “disarmed” to “armed Away”?

SharpTools act on a change in SHM armed state, such as changing from “disarmed” to "armed Away

Not directly. At the time of publishing the SharpTools SmartApp, SmartThings indicated that the code for subscribing to and controlling SHM was considered unofficial and would not be approved as part of the SmartApp publishing process.

Not directly. At the time of publishing the SharpTools SmartApp, SmartThings indicated that the code for subscribing to and controlling SHM was considered unofficial and would not be approved as part of the SmartApp publishing process.

Well, that’s where the MacGyver stuff comes in.

Of course, you’ll need the joaoapps like Autonotification to accomplish that. Between Tasker, Sharptools, and those apps, you can create a whole automated environment alongside ST. If a way could be found to make sharptools run locally, then the future of ST’s cloud would become irrelevant.

Well, that’s where the MacGyver stuff comes in.

Oh, I completely agree. You can easily get the SHM status, subscribe to it, or even change it… so if you wanted to create a SmartApp to control it, you could do so. (You just can’t submit that SmartApp for approval.

You could even have that custom SmartApp send the status to a virtual device which SharpTools could interact with.

I’m not sure if the stance has changed at all, but at the time of submission I was told that these commands were unofficial and SmartApp submissions wouldn’t be approved with this in them. Some of the community developed SmartApps which require manual installation via the IDE had included this feature, but I haven’t kept track of which ones. For example, it was in Rule Machine at one point, but I haven’t checked if CoRE has it.