No worries. I just fixed it based on the link @jamespreedy sent above.

Basically I did this…

I have it working however the temperature read is in Fahrenheit and not C? How can I change this

Anyone notice a blank event (which according to logs is thermostatFanMode) every 10 mins with no data? Want to shortcut me looking at the code to hide this in my activity feed and see if anyone else has hidden them. 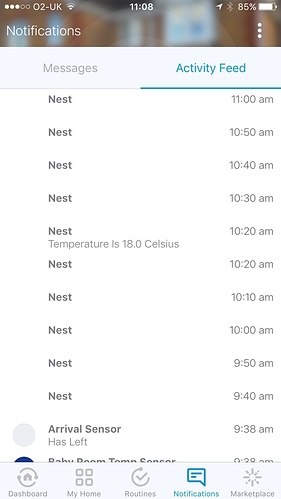 Are you using my deviceType from above?
I don’t have these notifications, and I’m pretty sure I removed the thermostatFanMode since the UK doesn’t use this.

yes i am. I changed via the IDE the device type. I have the new screen. I wonder if I delete the device and add it again.

Been using this for a while now, works great, except the polling, anyone else experience that?

I can’t get polling working. I have no idea why it stopped working as it all seems to be enabled and configured correctly.

Very new Smartthings user here, only bought my kit at the weekend but I already had Nest G3. Got the original code working yesterday and then started messing with the code tonight to take out the non UK stuff but just found this code. Pasted it in and it works a treat, thanks

Very happy and thank you for your efforts.

Quick question, is it possible to set the Nest to Away as part of the ‘Goodbye’ routine?

I’ve purchased and installed 2 3rd gen nests and would now like to add them ST.

I just have 2 questions if anybody could help?.

Thanks in advance guys.

It can’t be used as a presence sensor unfortunately. I still cannot figure out for the life of me why this doesn’t poll correctly either.

EDIT: Seems like polling is an issue across the board…

I submitted a ticket regarding two of my devices which poll some days and don’t poll on other days. Everyone on this community knows that polling doesn’t work correctly. Pollster was written to solve this issue but it would be nice to have the native support from Smart Things. I pointed out to support that this is an existing issue and pointed to a thread for pollster which describes the issue. This is the reply I received. Sorry for the delay. We are aware of pollster, and we can't recommend using it due to it crippling a Z-Wave network by over-polling it. Unfortunately, It looks like you're using a custom device type and there isn't much we can do to help with that. I'd recommend contacting the developer who wrote the device type to see if he might have any insight to the issue. …

###This SmartApp and Device Handlers are Outdated Please follow the link below to the newest version: https://community.smartthings.com/t/release-nst-manager-v5-0/

NST Manager (SmartThings). Contribute to tonesto7/nest-manager development by creating an account on GitHub.

having issues having added smart apps and code from link above.
Can I start of from saying I am not a developer and a simple user who is trying to add nest support in the UK.
Firstly I was not able to add Git Hub update from Repo with the Eu west IDE link. (https://graph-eu01-euwest1.api.smartthings.com) so logged in under (https://graph.api.smartthings.com/ide/devices) added link and copied smart app code and thermostat code and added manually as a new smart app and device under my euwest link which shows the home hub and devices.
All looked well in that temperature was correctly shown, however I cannot change the temperature.
So try to remove app then device however I clicking remove a error is created 'an unexpected error has occurred’
Now I tried to be clever here and altered the app to Feed Barkley and then try to remove.
However on trying to remove I got a message stating the device is in use, so now have a circular issue cannot remove device as smart app installed and cannot remove smart app as device in use.

Thanks in advance for any assistance.

As posted above I used this code and was really pleased with it for a focused UK version with none of the components we don’t use. However I’ve since started to use the Nest Manager App which is based on the Official exposed API’s from Nest and it includes the Protects within the app capability. So I’m now back to a US focused App with HVAC controls we don’t use etc. Would it be possible or would anyone else be interested in a UK port of the Nest Manager? I think that would then be a really good UK Nest SmartApp.

I expect when the new version of nest manager is released, you will find it works USA or UK. If not it is a bug…

I think what @andyjh was getting at is that my device type is specific to the UK, where as the Nest Manager one isn’t.

The Nest Manager one still works, but it also supports things like A/C and Fan mode which we don’t have in the UK due to having a water based heating system as apposed to air.

If you actually send Nest US commands to the UK thermostat, it temporarily unlocks the features. They don’t do anything, but they accept the commands

We are all about making a one size fits all app.

It’s just very difficult to automate some of this stuff because of the limitations of the device handler and dynamic tile loading. We will look for a way to achieve this. It may require us to create an alternate device handler that can be selected before the devices are installed. Maybe we can add in the alternate tile code for the UK and users can just comment them out.(This may be a pain because it would be overwritten when there are updates

Yes @ghesp, that was what I was meaning, the Nest Manager works for UK Nest’s but contains tile graphics for commands that don’t work for us.

@tonesto7, to have a one size fits all Manager App would be fantastic but I realise this would be low down on your priorities! Personally I would love it to happen if it was simple but I wouldn’t want it to distract from the good work you are doing for all with the Manager. I assume to comment out the sections that aren’t relevant to us in the UK is fairly straightforward, apart from having to do this at every update but it would be the restructuring of the tiles that would be more of a pain. Unless you could ‘borrow’ the tile layout from the port in this thread, comment out the a/c fan sections and see if it works? Just an idea to try if you get some time.

To be honest, it shouldn’t be too hard to just add a setting option anid display the relevant layout based country.
That depends on the logic of the app though

If it were only that easy. There is no published way to accomplish this currently. I have had the code in there to do it since day 1. The apps will not honor it though

I guess if it can’t be handled automatically by the app due to limitations then having something that UK users can manually edit would probably be a pragmatic way forward, if possible. Leave it defaulted to US users as the biggest population, any UK user who doesn’t want to edit can still use but have features displayed that can’t be used, those that are confident to make the alterations then can. Don’t know if that could be an approach without causing too much effort and solutioning? Just happy that you are considering it though