I have a string of dimmable LED lights. I thought I could use a GE dimmer switch to manage the outlet (GFI), but that won’t work. So looking at a standard on/off GE switch, the instructions indicate that you can only use it with a fixture, not an outlet. Same as the dimmer version.

So this is my scenario: LED string plugged into a GFI outlet. I want to control via smartthings while still having a wall switch to manually control.

What should be my config?

So looking at a standard on/off GE switch, the instructions indicate that you can only use it with a fixture, not an outlet. Same as the dimmer version.

Is the current outlet currently connected to a regular dumb wall switch? If not, what was your wiring plan going to be???

The following is not weatherproof, so you’re going to have to put the whole outlet inside a plastic project box to shelter it from the weather, and this won’t work if you live in Minnesota or someplace where you get long periods of subzero temperatures. But if you live in a more temperate zone, the easiest way is just going to be to use a plug in pocket socket dimmer like the following: 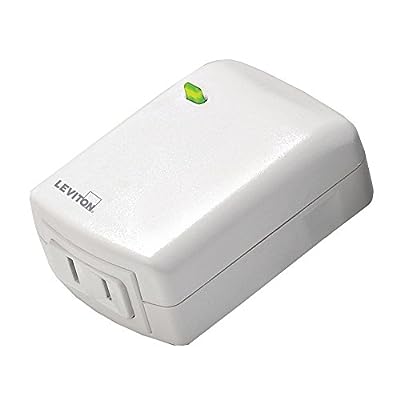 When using a compatible Z-Wave enabled controller, you can schedule or dim your plug-in lamps from anywhere. Automate plug-in lamps and holiday lighting without any new wiring - simply plug in the dev ...

It works fine with dimmable LEDs up to a 100 W load.

So it will be a no installation project except for the shelter box, you just plug it in. And you preserve your GFI protection.

To operate it from inside, you can set up rules-based automations, use the mobile app, or add an additional battery powered switch.

Or if you have a place for it, you can also use a mains power switch which is on a different circuit then the actual outlet and use a no load dimmer switch there.

The box covers are usually called a “weatherproof electrical box cover” and should cost under $15. Get a clear plastic one for minimum radio interference. Don’t get a metal one or a blue plastic one, for some reason the blue one seem to block signal more than other colors. 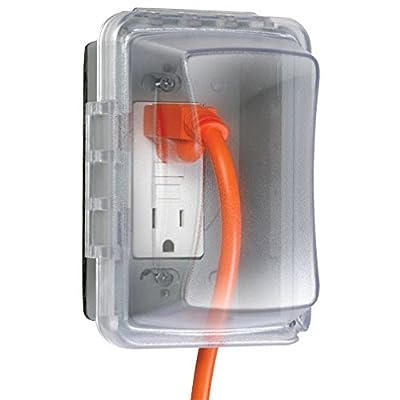 Ah, this might do the trick. The outlet is in a very similar weather proof box to the one you indicate, so weatherproofing is checked off

Thanks for the great detail.

Forgot to ask… does the “dumb switch” have a Neutral wire at it (i.e., Hot, Ground, and Neutral)?

If so… then you are all set to install a ZigBee or Z-Wave dimmer right at the Switch. Even though these are not “meant” to control an outlet, they will work fine.

The reason it should not be used to control an outlet, is a dimmer switch should never be used to control a Motor or other arbitrary thing plugged into the outlet. So … well… you can’t control if someone decides to plug the weed-wacker or electric lawn mower in there, can you?

It won’t be to code if you put a dimmer switch on that circuit (that controls the GFI outlet) for the reasons you just gave. Somebody plugging in a lawnmower there will kill it.

Looking to renew your electrical license or prepare for the exam? Our CE courses are taught by licensed electricians and NEC experts.

That’s why you need a no load dimmer so the outlet is not being controlled by the dimmer switch, just the plug-in pocket socket is receiving the wireless command.

The plug in pocket socket dimmer doesn’t have the same issue because most of these are made without a hole for a ground plug, and most motor devices have a ground plug.

The non-dimming pocket sockets that are intended for “small appliance control” like blenders or hairdryers will have the ground plug hole.

So in this case someone wanting to plug-in a lawnmower will have to unplug the dimmable control before they can plug the lawnmower it.

@Navat604 or one of the other electrical experts in the community can say more, but in the US, you should not put a receptacle on a dimmer switch unless both are specifically designed for that purpose, in which case the outlet will not be a regular outlet and won’t accept a regular plug.

You can use a regular on/off switch, just not a dimmer.

The way around this. as we mentioned, is to use some other device that has dimming built into it and then match it to a non-load controlling switch. That way you aren’t actually dimming the outlet itself.

You can try it, but it’s not likely.

Remember that a PIR motion sensor, such as the Iris, isn’t actually reacting to “motion” and doesn’t “see” anything.

Instead, the PIR stands for “passive infrared” and it is measuring extremely small changes in heat as it passes across the sensor.

I’m pretty sure that the box will block the infrared and the sensor will never go off. But you can try it.

I have a string of dimmable LED lights.

I don’t see where anybody else has asked, or where you mentioned it. What kind of dimmable lights are they ? I ask because I have mine plugged into a GE outdoor module and then I can control color & dim with Harmony IR blaster . So I can turn on/off with ST and just use Harmony app to adjust color or dim level when needed ( wanted)

Your GFCI outlet won’t reset with a dimmer upstream of it. It’s not meant to work that way and will probably go faulty soon if you keep on trying to reset it. It requires constant power to detect ground fault so any chang in voltage by a dimmer will most likely trip it even with max brightness on the dimmer setting.
Is it possible to install the GFCI outlet upstream of the smart dimmer plug? Maybe look into a GFCI circuit breaker as well.

BTW, This project is for an outdoor outlet.

Because of potential fire and electrocution hazard due to weather conditions with outdoor sockets, some jurisdictions are getting really picky about having each outdoor socket be visibly GFCI. They don’t want homeowners doing rewiring later and putting the outdoor socket on a new circuit without having ground fault protection. So before moving GFCI upstream I would check with the local jurisdiction to make sure that’s still going to meet local code. 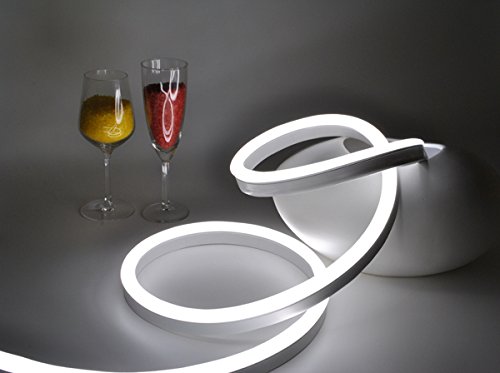 So it is just a plain LED strip with no controller. No controller eliminates the ability to connect them to a controller LOL
I don’t see any mention of them being " dimmable". Of course almost light " can be" dimmed by simply reducing power to them. I had Amber ones similar to those around the hot tub, along the railings for handicap ramp etc. I just used Outdoor module to turn them off/on. I eventually replaced them all with GardenSpots to give me more options.

I tried a dimmer on the ones in the bathroom around the jacuzzi, but was never happy with how they looked. Too much flickering when we tried to dim them

Like I said almost any lights " can be" dimmed by reducing the power. I found the LED strips to flicker a lot when dimmed