Tradfri Driver -- requires power cycling for light to go on

This is a problem that might have multiple solutions. I’m posting here in the hopes that someone is inspired to create a new device handler. That’s asking a lot I know!

I have a Tradfri 10W led driver attached to a non-Ikea 24v bulb and it almost never initially lights up. After power cycling the dimmer 1-4 times or unscrewing and rescrewing the bulb it will work. I guess the incompatibility is caused by the driver’s initial current. Maybe the driver initially spikes and the bulb shuts off? When the circuit is broken and connected again, the driver has warmed up and is providing current compatible with the bulb. It’s not perfect though – the dimming function does not work.

I’m curious what folks here with more experience and knowledge think. Any suggestions for getting the Tradfri to work better?

I live in a building that has solid, poured concrete walls. Adding light by channeling into the wall or ceiling would require lots of effort and create lots of dust. It’s also electrically outside of my comfort zone. Instead, I’ve powered low voltage lighting using flat, paintable speaker wire from Sewell. The painted wire is almost invisible. Here’s the light I have attached to the Tradfri driver. 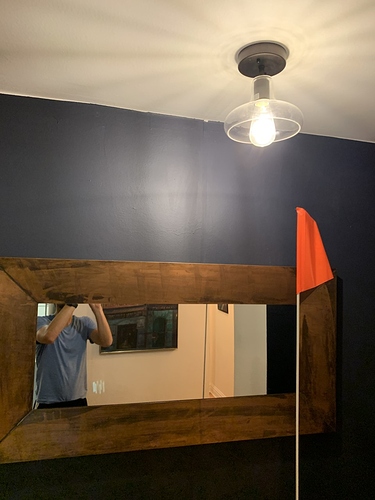 It works well after the driver is warmed up, providing continuous high-quality light.

The fixture looks great and the light, when on, provides necessary light. But, obviously, it’s impractical to unscrew the bulb and rescrew the bulb. A new driver that makes it work would be great. Alternatively, I’ll explore different hardware options. For this location, a smart switch and traditional driver would work, but there are many locations where that is incompatible.