Last night everything was working fine on my hub and devices.

This morning according to the app only the hub itself was online but all devices were offline.

A hub update happened at 12.30 am.
But whatever happened every zigbee device went offline and didn’t come back online.

I turned the hub off for a few minutes and then rebooted.
Atfter around 35 minutes most but not all devices came back online.
I don’t detect any migration to edge , plenty of devices are still on groovy dth (no driver showing in … menu for device)
I have two aeotec motion sensors, one of which has come back online and the other came online briefly and then went offline again.
I also have a Zemismart multi Gang (2 gang) lighting switch which won’t come back online.

I also have a IKEA motion sensor offline (I have 3 of these, others 2 are online, one on a standard dth the other on beta edge), the offline one is stock Ikea Motion Sensor dth. 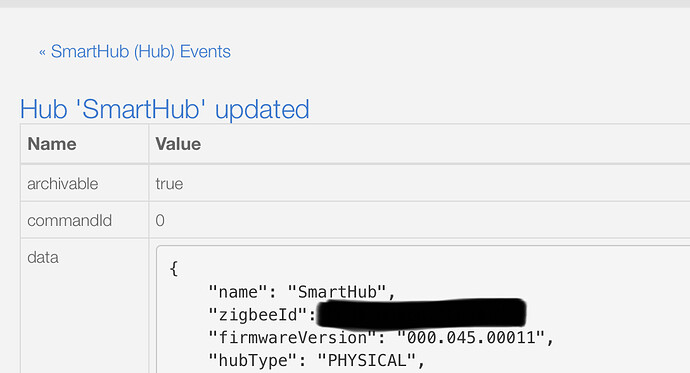 (the second update was supposed to have fixed zigbee problems introduced with the first update, but some people have reported it made things even worse.

We will begin rolling out Samsung SmartThings Hub hotfix version 0.45.11 starting Monday, October 31. Once downloaded, your Hub will briefly go offline as it reboots and applies the update; most customers will experience less than one minute of downtime. We will update the status page when the release is complete. Hub Target: Samsung SmartThings Hub 2015 (Hub v2) Samsung SmartThings Hub 2018 (Hub v3) Aeotec Smart Home Hub Release Date: 31 October 2022 ~ 3 November 2022 Note that we may release this hotfix earlier than the above date to hubs that we have identified as experiencing degraded performance which is expected to be resolved with this release. Release Notes Fixed a bug where ZigBee is stuck in an offline state until the hub is rebooted Resolved a known issue where customer…

Zemismart zigbee 2 gang switch was unresponsive even to pressing the control on the light touch panel.
It’s come back to life now but only after power cycling the lighting circuit at the switchboard.

The kitchen motion sensor also came back online but didn’t report and motion events for about 15 minutes, it’s self resolved now with no action from me.

Apart from the hub firmware update and the hassle to get stuff back online I can’t see any material change wrt drivers etc.

What does this mean for Inovelli Dimmer Red Series? That is the only custom device handler I have in IDE. Also, does this mean we will no longer be able to access the cool information online like what devices are my zigbee devices hopping through?

Also, does this mean we will no longer be able to access the cool information online like what devices are my zigbee devices hopping through?

So far, no alternative has been offered for routing information. Hopefully they will have one by the time the transition is complete, but we just don’t know.

We are following these and other IDE related questions in the following thread. The question about routing has already been posted there, but, as I mentioned, no answer yet.

Life after the IDE: Questions and Answers

I have a browser-based web app that provides a point-and-click way to explore most of the SmartThings API. For the non-technical, this gives you access to an important SmartThings resource without having to learn tools like Postman, curl, or the CLI. You don’t even need a computer: a tablet or even smartphone can be used. For the more technically inclined, it provides much faster and more convenient access to those commonly-accessed CLI commands. Although I originally thought of it as a portal for the non-technical, I’ve actually found it quite useful to use during my own development activities. This is not intended as a replacement or ‘competitor’ to the CLI, mysmartthings, IDE(? well, maybe…), mobile app, etc, but is meant to provide a quick and easy supplemental tool. I want to a…

What does this mean for Inovelli Dimmer Red Series? That is the only custom device handler I have in IDE

Nothing, really. Edge drivers for the Inovelli Red Series and other Inovelli devices are available.

I have yet to see an improvement in speed by using edge drivers. It is actually worse in terms of speed. Before, my sensors would sense motion and turn lights on within a second. Now, it takes 2 to 3 seconds to do the same. I have zwave mesh covering my entire house. Same with zigbee. Even the wifi Kasa plugs were faster before I move them to the community edge driver. I have around 120 devices and around 27 edge drivers. Is this what is causing the slowdown? Is there a way to improve the speed? One of my zooz switches controlling smart bulbs takes about 5-8 seconds when toggled. My hub is centrally located in my house. Already did several repairs on zwave and rebooted to try and fix Zigbee.

most likely a combination of things in the beginning of the newness. pretty sure they are still tweaking things on the backend. also, 27 edge drivers is a lot so that could also be impacting things. i still have devices split up across several hubs on one account and things are still snappy.

With all of the changes over the last couple of weeks, I’ve noticed slight delays in automations and voice command responses.

Agreed, i have most of my 50 devices using drivers and the response and reliability of response is concerning. I have reduced my driver load to the bare minimum (<15).

I have restarted the hub, run ZWave repair multiple times and cannot seems to improve performance. I’m on a V3 ST hub, also centrally located. Over the weekend all four of my ST buttons have stopped working. It looks like the ST stock driver was update because the amount of programming options under “settings” is about 3x what it used to be including 6x presses and toggling. I have tried to remove and re-add but nothing seems to get a response from ST. Is anyone experiencing the same with buttons?

UPDATE: I have installed the @Mariano_Colmenarejo zigbee button driver and it has solved to issue. Therefore, the issue has to be with the stock ST Edge driver, rendering the ST buttons useless.

I don’t have many zwave buttons, only one zooz zen34. All of my buttons are mostly zigbee (Aqara,Tuya and Ikea) and I haven’t had issues with them. I don’t have many issues with devices dropping at all, it is the speed that is very disappointing. All the edge drivers that I have are in use by the many devices, I was able to consolidate from 32 to 27. I wonder if too many of these edge drivers are sending status request back and forth between them and the hub. Could that slow down the responses?

I have a v2 (2015) hub and it hasn’t upgraded yet to the EDGE, just zigbee and zwave. Assuming that will update some day?

I also have a v2 (2015) hub.
The recent updates have been more ‘EDGE ready’ rather than an instantaneous transition.
Also EDGE is the new SmartThings architecture; zigbee and zwave are not going away.
In your SmartThings app, click on your hub. Then click on the 3 dots top right. Select ‘Information’.
What ‘Firmware version’ do you see. Mine is 000.045.00011
This is the latest production release.
The transition to EDGE is happening and will continue to progress over the remainder of the year.
People who wanted to be ahead of the curve joined the EDGE beta program; I did.
For more information you are going to have to read more widely; this whole thread would be a good start.

I’m an “out of the loop” developer - have just created apps in the Groovy IDE, admittedly wasn’t aware of all these upcoming changes.
I have approximately 50 ZWAVE devices I’ve been managing through my apps and Smartthings.
Have a couple of custom drivers that I’ve installed, for example for multi-relay.

Is there a summarized guide for porting my apps and code so I can continue using them with my devices? I don’t mind getting a local server going, just looking for some practical guide for restoring my ability to maintain my apps and environment.
And/or is there a summarized guide for step-by-step installing an environment where I can maintain the same level of service and automation to my devices by using the new platform?

Is there a summarized guide for porting my apps and code so I can continue using them with my devices? I don’t mind getting a local server going, just looking for some practical guide for restoring my ability to maintain my apps and environment.
And/or is there a summarized guide for step-by-step installing an environment where I can maintain the same level of service and automation to my devices by using the new platform?

Sadly not, but there is a community FAQ for users that might be a good place to start. It will give you the basic concepts and terminology, plus links to the (several) official announcements and more places to research.

Looks like Live Logging has been removed from the IDE.

Surprised they aren’t focusing more on completing the transition before removing functionality.

Surprised they aren’t focusing more on completing the transition before removing functionality.

I’m surprised they aren’t announcing each change and publishing a guide to alternatives.

They did for the Classic app transition when a bunch of official smartapps were discontinued. They had a table on the support site showing what was going away and what the replacement was.