here is what I did… see the outlet I installed

The multisensor can be used in a number of ways. With the magnet it can be used as a standard open/closed sensor (closed when close to the magnet, open when away from the magnet). This is commonly referred to as a reed switch or reed sensor. Without the magnet it can be used as a tilt sensor - i.e. sense which way gravity is acting, thus which way is "down" and thus which way the sensor is tilted. So, for a tilting garage door, for example, you wouldn't normally use the magnet, you'd instead rely upon the 3-axis accelerometer to detect which way the multisensor is tilted to determine whether the door is opened or closed. This is what SmartThings is referring to when they talk about changing the multisensor to garage door mode. For the front door of my apartment however (just a regu…

Thanks. Yeah, I thought about that. I wanted to avoid having to go through the bottom.

The biggest thing I would worry about is meeting electrical code. if something goes wrong with that cable in wall and something bad happens such as a fire, your insurance company may tell you were to go.

400.8(5) - Flexible cords and cables are not permitted where concealed by walls, floors, or ceilings… 400.8(6) also states that this wiring method shall not be installed in raceways unless permitted by the respective raceway section.

Note - I am not an electrician, nor do I do anything relating to the field. I’ve just looked into doing the same and was smacked down by a master electrician relative.

400.8(5) - Flexible cords and cables are not permitted where concealed by walls, floors, or ceilings…

Then these are a code violation? 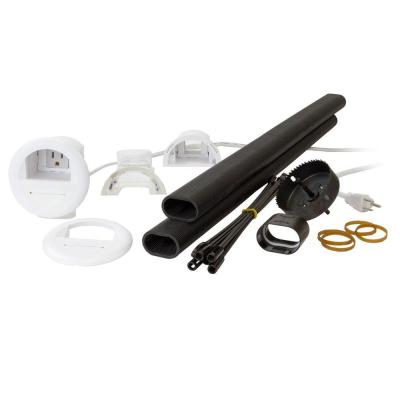 From the FAQ on the page, the power cord supplied with the kit confirms to standards. Running a usb cable through a hole in the wall, which many people seem to do, does not

the power cord supplied with the kit confirms to standards. Running a usb cable through a hole in the wall, which many people seem to do, does not

Otherwise, the kit above is a possible solution, since you could put a 5v USB adaptor in the upper outlet.

If you short a 1.5v AA battery, it can get hot enough to start a fire. Shorted LV wires at 5v to 7v will easily do the same.