Switch to turn on Alexa Group

How about we approach this a different way. What is the other HA system? The community is VERY good at integrating various systems. Let’s start there.

the other is Hubitat. All local processing and am trying it out.

Thread here. Some have gotten ST to talk to Hubitat and visa-versa…
https://community.smartthings.com/t/hubitat-elevation-hub-home-automation-that-is-local/117107

Alexa is not automation

Well technically, with the Routines in the Alexa App, it can actually do some basic automation. OP might be able to get it going if OP can create the necessary routines in each individual system and then put those switches in the Alexa group…Maybe?

It can do basic ‘automation’… but any such automations stem from a voice command, not from a condition being met.

Not to push back too much but Alexa Routines can also be triggered in the Alexa App based on a Scheduled Time. But yeah, still very basic compared to what you can do with a true HA System.

I am wanting to find a way to setup a virtual switch that will trigger a group in Alexa. I have 2 HS systems and I would like to put a switch from each in a group so that when the group turns on it triggers an action in both systems.

Today, you can get your Hubitat devices to show up in ST and control them from ST. This might get you what you need.

Details in this thread

No, that should not make any difference. The ST-side of things is simply discovering devices (only a subset are supported) via the Hubitat “Hue Bridge” device. That is what creates the child devices. The ST-side SmartApp is simply an OUATH endpoint which listens for device status updates coming from the Hubitat-side App. The Hubitat-side App needs to know the OAUTH endpoint URL of the ST-Side app so it can send updates. Your account credentials are never used.

Both the ST Hub and the Hubitat Hub need to be on the same network for the discovery to work. Also, it takes a while after you press the REFRESH button in the ST-Side Hue Device for the devices to be discovered. Be patient. The Amazon Alexa uses the same discovery mechanism. Do you have one? Are the Hubitat devices showing up in Alexa? If so, I would think that @krlaframboise 's code should work as well.

Both the ST Hub and the Hubitat Hub need to be on the same network for the discovery to work.

With the increasing popularity of Wi-Fi mesh systems we should also note that they may need to be not just on the same network but on the same branch, depending on the exact Wi-Fi system being used.

Yes I have Alexa nd it works great. They are on the same lan together and I have selected three devices in the Hubitat app.

This is what I get in the st hue 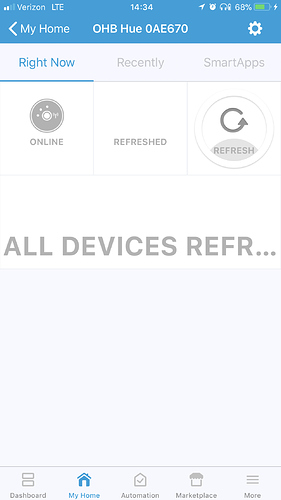 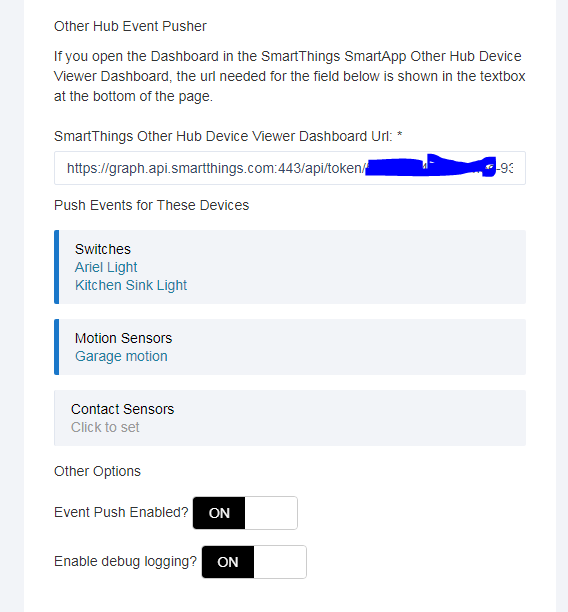 and I get this in the logs

should it show my hubs IP in the ST Device? 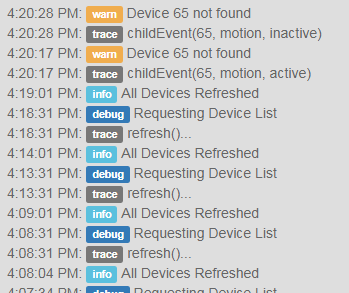 I am getting stuff from Hubitat in the DH and in the App but still no devices discovered.

You may need assistance from the author, @krlaframboise, at this point to troubleshoot further.

should it show my hubs IP in the ST Device?

If I remember correctly, that’s the ip address converted to hexidecimal.

I am getting stuff from Hubitat in the DH and in the App but still no devices discovered.

Did you change the type after SmartThings identified Hubitat as a Hue Bridge or did you manually create it?

If you created it, delete it, and re-run add devices so that it automatically finds it.

If it was originally found as a Hue Bridge and you changed it, which is what should have happened, try rebooting the hub. Pull the power cable, remove the batteries, wait about 15 seconds and then plug it back in.

If that doesn’t work you might have to remove the bridge and then re-run add devices so that it finds it again.

SmartThings has caching issues so you might have to open and close device a few times in the mobile app before you see the child devices.

I didnt manually add it but I just did delete and readd it. Same results.