…as long as total wattage does not exceed the rating of the switch… (Which it should be OK if your wiring is already up to code.)

Also NEVER install a dimmer on a circuit with an inductive load. (Read: fan) Fire can happen.

That means this needs to be a SWITCH, not a dimmer. and because it controls the light at the same time it can’t be a fan controller either.

So find smart switches of your preferred tech that works in your region (let us know where that is for suggestions) that also meets the power requirements.

Sure, Zooz has one for just this purpose, assuming you are in the US or Canada. 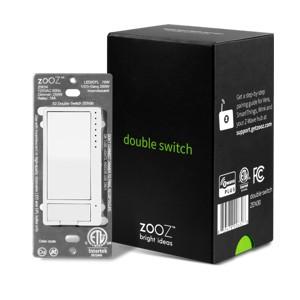 Do It All    PRODUCT HIGHLIGHTS Z-Wave Plus Dimmer (up to 75 W LEDs and 250 W incandescent) and On/Off Relay in one The first Z-Wave double wall switch! Direct replacement for fan / light combo switches or other double switches in...

Check with them for questions on wiring.

JD - that device only works if OP has separate load wires going up to the fixture for fan and lamp. I strongly suspect that’s not the case here.

I will have to check the wiring to confirm if there are separate load wires or not.

Btw - for reference to first answer, i’m loaded in the US.

JD - that device only works if OP has separate load wires going up to the fixture for fan and lamp. I strongly suspect that’s not the case here.

Yeah, I suspected that too, but that’s why I kicked it over to the smartest house for wiring questions.

Basically this is the device they want to end up with, but they might have to change both the model of the fan and the wiring to get there.

Yes, I use this to control a ceiling fan and light combo directly connected to my ST hub, not Aqara’s hub: (there’s also a no neutral option)

More detail: (and a few pictures)

. Got my Aqara double rocker and it’s installed. My first impressions are that it is a good device, but doesn’t feel as firm and solid as the GE or Zooz switches I have, especially when pressing buttons. That could be because it’s almost all plastic. It’s also smaller than my Zooz and GE devices. Buttons are very touchy, and not too firm like the other switches where someone who accidentally leans up on one won’t turn it on. While it is a white switch, it’s matte white, and not gloss like my other switches. I can live with that. It also fits within a traditional decora wall plate instead of using the one that came with it. See the image further down. The blue LED’s come on when the switch is on vs. the other way around like all my other switches work. I can probably live with th…

Oops, just saw the wiring requirement that the OP has, sorry!

I don’t know the answer to your question, but I posed a different, but similar use case that could apply here. If you don’t change the wiring (which as others pointed out) probably does not have separate leads for the fan and the light, could you get a new smart unit that does both via zwave/zigbee? I’ve searched and posted a separate thread on this but so far, don’t have any responses on that scenario (my case is actually a separate light and fan, but common wiring). There are $$$ units that play BT, but no smart controls that I found.