Hi All, I popped over to Curry’s at the weekend to buy an ST hub and have a couple of comments questions that have sprung to mind over the last couple of days:

Hello from a fellow UK ST user. I previously had an X10 setup, not very reliable. I switched everything over to Z-Wave and ST.

ST is aimed at Zigbee devices which is a generic protocol, and has support for Z-Wave which so far I’ve found to be great.

It’s worth making sure whatever you’re buying is compatible, this can be achieved quite easily by either looking at their list, or asking on the forum. There are so many additional items which can be integrated if custom code is used. Writing it is not often (or never) necessary, but copying it and pasting it to the correct area is required for those devices.

ST is designed to be open and compatible. If there are Zigbee or Z-Wave devices that don’t work with it, it’s likely that they aren’t quite up to scratch (e.g. not Z-Wave Plus devices). Most can be made to work, but sometimes it takes a bit of effort. There’s plenty of that here in the forums.

ST is a fairly unique offering in the market at this point, for the above reasons. It’s not trouble free though, and when updates are pushed out (at least recently) it has messed things up a little. Forum visits can be required to fix them.

ETA: I was a little surprised at Currys being the only retailer as well… I believe this will lead to many confused consumers who just went out on a Sunday afternoon to look at fridges.

Thanks for your reply - I certainly want to give ST a fair go. I have also switched from X10 - and whilst X10 was incredibly basic - one thing I was able to do was to control multiple devices easily (albeit with a physical remote, or interface on my PC). I want to do this via an app though - and I’m worried ST won’t allow me to do that.

Going back to one of my previous questions - it’s essential I can have something like that pictured below - I control all (or at least some) of my devices from a single app screen - at the moment using the ST app, it appears multiple pages must be navigated through to move from one device to another. 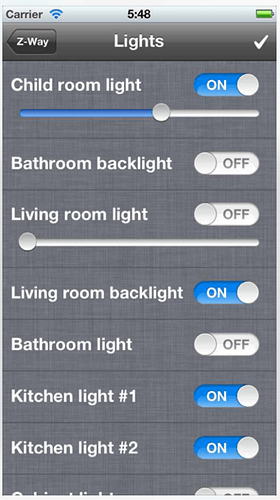 There are plenty of apps / sites that integrate with ST at that end too, although I haven’t been far down that road yet. IFTTT is a good one for a simpler interface, along with SmartTiles. I feel like there must be something around which fits your needs.

Even in the basic app you can list all ‘things’, although you’re right in that you can’t dim from there, you’d need to go into the device.

Give SmartTiles a try. Future versions will implement finer controls on sliders like you depicted, but for now you can at least control and view every supported (SmartTiles supported) device on the same page.

ST is designed to be open and compatible. If there are Zigbee or Z-Wave devices that don’t work with it, it’s likely that they aren’t quite up to scratch (e.g. not Z-Wave Plus devices). Most can be made to work, but sometimes it takes a bit of effort. There’s plenty of that here in the forums.

I was a network engineer and worked with both zwave and Zigbee prior to buying SmartThings for hone automation.

Z wave requires compatibility at the “basic” level, which basically means turning on and off. This is the level for which the SmartThings hub is certified.

Zwave also offers a number of advanced command sets. SmartThings has implemented some of these, but not all of them.

It has not been my experience that a Zwave device not working out of the box with SmartThings is usually because the Z wave device itself is deficient.

Sometimes it’s a matter of missing command sets on the SmartThings side. Sometimes, as with scene controllers, it appears to be an architecture decision on SmartThings part that they will not use methods that limit the use case to only Zwave devices. They pretty much want everything to be multi-protocol.

So there are many different reasons why a Z wave device not on the official “works with SmartThings” list might be limited to just basic on/off functionality went first added to the system. Sometimes additional features can be made available through custom code. Sometimes not.

Usually if you ask in the forums people can help determine the exact issues and what, if anything, can be done to get additional functionality from the device.