That’s because the new apps SHM is totally separate from the Classic version. It’s a whole different app using the new API instead of groovy.

That’s because the new SmartThings App’s SHM is totally separate from the Classic version.

You’d think I’d know by now, but to be 100% honest, I’m avoiding the new SmartThings App as if it were ebola. Head buried in sand here, but I … don’t like this ambiguous situation at all.

Yup, same name and everything, but doesn’t have leak, smoke, and custom (yet?), just security.

As of this writing, STSC does not offer any way to automate the unlocking of a lock. Just the locking of it. You can open the mobile app and see the lock listed and unlock it there. But you cannot set up to unlock it when you arrive home, or at a certain time of day, or when a specific sensor activates. You can do all of those and more with the classic app. It is unknown whether this capability will be added to STSC or not.

STSC has a limit of 20 rooms you can add

But you can add more than 20 in the Classic app and they show in the STSC app.

If you get the new V3 version of the hub, you will have to set it up using STSC, but after that you can use either app with it.

You’ll need to use the new SmartThings app to claim the hub but once claimed you can use the Classic app if you’d like.

I’ve also noticed that STSC doesn’t have text notifications in any of the apps. Such as SHM, Notify Me.

New one I found out last night:

In STSC Smart Home Monitor, you can no longer select cameras to automatically record when an alarm is triggered. This is now left to 3rd party apps (Arlo etc).

This was very useful as, on alarm trigger, you could ask to record several cameras (including those with no motion sensing capabilities) to follow what is going on.
Now this will only be done by the built in motion sensor of the 3rd party camera (when the Arlo camera is on, it will record on motion detection and will be viewable in the Arlo app, not in the STSC app as for the Classic app.

In STSC, Arlo Q Cameras are only seen as motion sensors (no sound sensors anymore).

rut roh! are you sure? re-read the two settings. In the Classic app, it is Insecure Rejoin and in the ST (Samsung Connect) app, it is labelled Secure mode. So that would make them correct in both apps. If you change the setting in one app (from off to on), it changes the settings in the other app (from on to off). 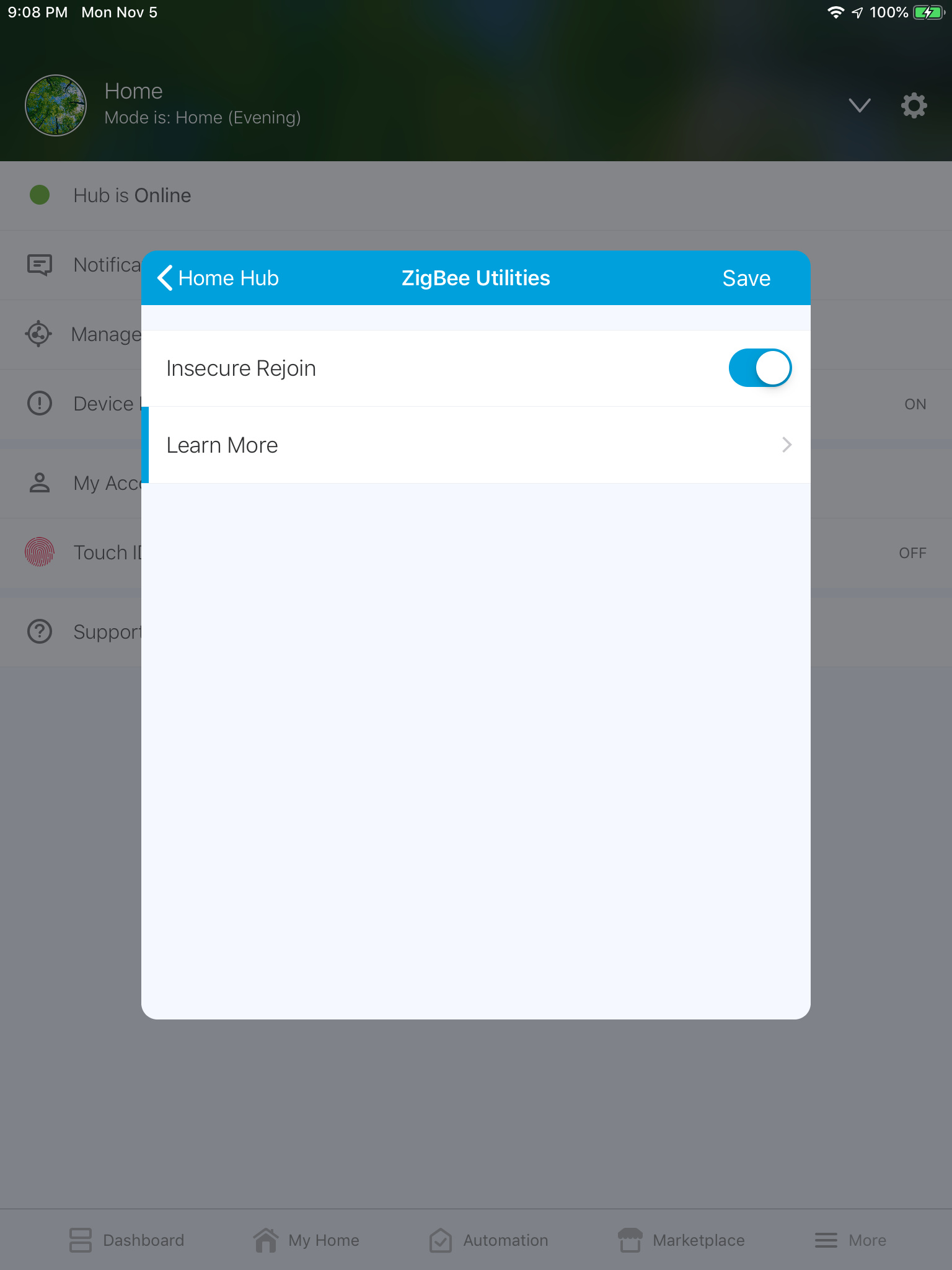 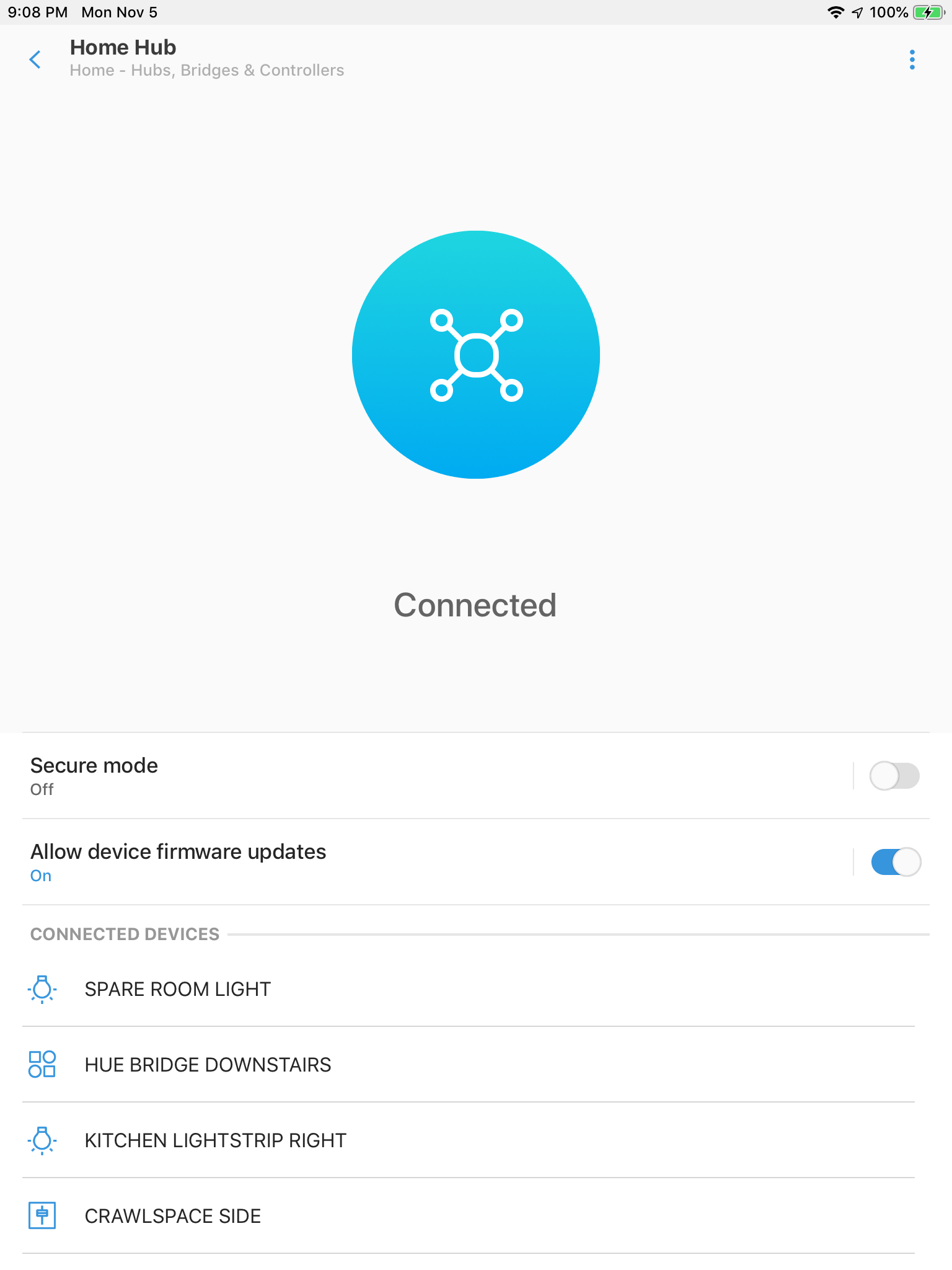 Right, but I’m just saying that the default is different depending on which app you start from. That’s also what the knowledgebase article says. The older app enables insecure rejoin by default, and therefore is less secure them the new app, which disables by default. But you can change the setting from either one.

but insecure rejoin is enabled for both apps

but insecure rejoin is enabled for both apps

In your screenshots, yes. But the knowledgebase article says that the two apps have different starting default values.

But that’s just the initial settings.

It’s not my statement. It’s from the official support knowledgebase article. I didn’t paraphrase it, that’s exactly what it says. It’s not using two different terms in those statements. But I don’t know, maybe the author of the article wrote it incorrectly.

then this support knowledgebase is incorrect, it should read in the SmartThings app, Secure mode is disabled by default. because if I change the settings in one app, it changes in the other app

The following threads discusses how to set the account location in the new app if you aren’t sure. Note that the process is different than setting your Geopresence location for your phone.

As of this writing, the iOS version of the new V3 app needs to have the Geopresence used for the phone location refreshed from time to time. This seems like it is probably a bug, but it has now persisted through several updates to the app, so maybe not. With the classic app, it is the android version which is more likely to need location refreshed.

I am new to SmarthThings (so I could be doing something wrong), but in the SmartThings App (new one) it keeps loosing my device as a location sensor. When I go to create a new automation, i get a warning "to use this condition, use location information needs to be turned on . . . " If I go into “Settings-Use location information” it shows it as “off”, when it has been on and working. If I go and turn it on again, and then go into create a new automation there will be multiple instances of my iPhone to choose from. If I check my “devices” on the hub webpage it lists multiple instances of my iPhone, but only one of them has recently connected. They all have different “user_uuid”. Any ideas? Thanks!

As of this writing, it appears the new V3 app does not recognize hue light strips attached to a hue bridge. However, they will be discovered automatically if you are using the classic app.