Something similar to WEMO Away mode?

I don’t know if this is the right section, and maybe it’s been asked before and someone can point me in the right direction.

Is there a way to set up something similar to WEMO’s away mode? For those who don’t know what that is:

The WEMO app supports setting up an “Away mode”, which means that all of the lights/switches that are added to this rule, they will each independently turn on and off at random intervals to make it look like someone is home.

Is there a way to accomplish this with Rule Machine maybe? I know there is a feature in there somewhere with something relating to random delay, but I don’t recall where, I just remember seeing it. I just don’t know how to set something like this up so that each item in the list of devices will act independently.

Go under the app marketplace in the SmartApp area go to lights and switches, look for vacation lighting director. I think that will do what you want.

Oh geeze, I can’t believe I missed that. I must have looked right past it.

Happens to all of us at some point. Good luck with ST and your setup.

For anyone interested, I realized a way to do this with Rule Machine. It doesn’t run on the devices independently, so they would synchronously toggle. But I personally only need it for one light, so it serves my needs.

I like to keep everything in Rule Machine unless I have to, makes managing all the rules easier.

Here’s how I did it in Rule Machine. I set the Triggers to be when the light turns on or off, then I set the action to be to toggle the light, but only after a random delay between 1 and 10 (you can specify the max random delay). 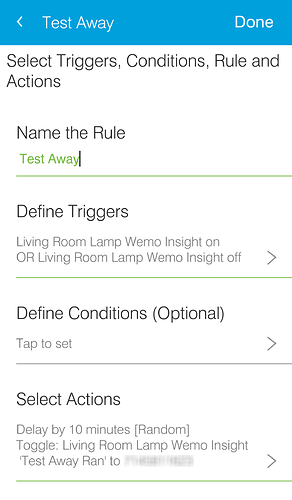 You can see the random delays between 1 and 10 minutes. 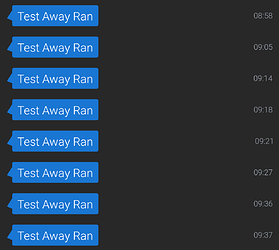 Now that this is working. I’ll change the delay to maybe 30 minutes or an hour so it looks more realistic.