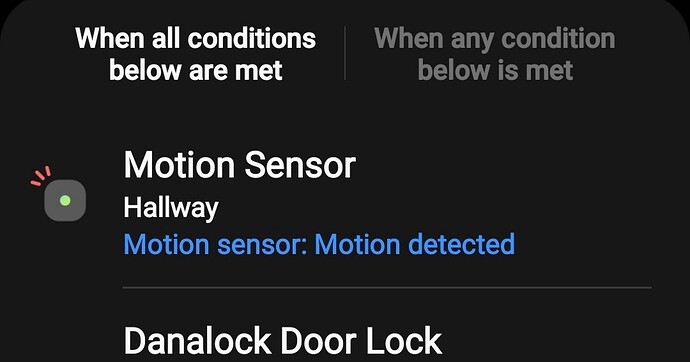 Can someone knowledgable please explain to me why this routine triggers despite the lock having just been unlocked and then being locked for like 5 seconds. I was under the assumption that this will only take effect if the lock has been locked for 10 minutes, am I misunderstanding something?

Is the motion detector detecting motion before the unlock?

Hmm, I went to test your theory out and noticed that the lock is not operating as expected. Seems as though it had dropped connection to the hub but weren’t showing as offline. After a bit of fidgeting it started working as intended and with that the routine aswell.

However this begins to worry me since i switched from a Zigbee version to Z-Wave of the same lock because of literally this issue. The Zigbee version just kept disconnecting and staying offline withing a couple of hours from connecting. Taking out the battery for a couple of seconds and inserting it again would make it connect again but without fault it would come offline in less than 6 hours. If the Z-Wave version has the same issue despite Danalock support stating the opposite I’m gonna blow a gasket.

With Groovy going out and Edge coming in I have no idea if this looks correct in IDE but my assumption is that something is not quite right. 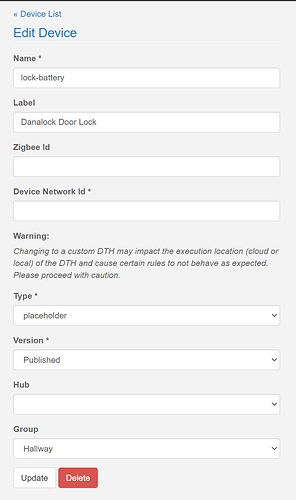 Can i enter whatever i see fit under Device Network ID or will that break something? There are some other Device Handlers I would like to try but the empty Network ID field keeps me from changing.

That is normal for Edge drivers. Don’t try to change anything.

Allright, it seems to be working fine now with all the routines connected to the lock but I won’t hold my breath since this is Danalock we’re dealing with.

Thanks for the help and input fellas, greatly appreciated!