I’m sure the answer will be, ‘Yes’ (that it was worth the wait).

Looking forward to it.

I believe I will try the Ecolink Tilt sensor. I am not wanting to control the door, I just need a reliable open/close sensor and the ST sensors do not work.
Thanks!!

I’ve had crap luck with the ecolink. When it works it works great but way too many false readings - it’ll report my door is open out of no where and sometimes it takes 15 minutes to register that the door closed. I have two of them and both are the same. I have not tried new batteries however but they have been acting like this for a long time, pretty much since installation.

That is how most of my ST sensors work. False readings. AND I can’t get the Smart Home Monitor to work at all. I have reported it here and direct to Support. No response.

Are you using the original ST Multi? It works great on my door.

I tried that one. I originally put it up with the magnet. Then I read the instruction and they said not to use the magnet even though it came with one. I took it off; I guess I should give it a try it again.

Don’t use the magnet.

Only use it as a g-force sensor.

do what? use it as a g-force sensor? what do you mean by that?

When the door vibrates(opening/closing) the sensor will indicate door action.

Oh, got it. I thought you meant to use the magnet as a g-force sensor. My bad. It is a Friday so my brain is fried by now!

The multisensor can be used in a number of ways.

With the magnet it can be used as a standard open/closed sensor (closed when close to the magnet, open when away from the magnet). This is commonly referred to as a reed switch or reed sensor.

So, for a tilting garage door, for example, you wouldn’t normally use the magnet, you’d instead rely upon the 3-axis accelerometer to detect which way the multisensor is tilted to determine whether the door is opened or closed. This is what SmartThings is referring to when they talk about changing the multisensor to garage door mode.

For the front door of my apartment however (just a regular door), I use the magnet (attached to the door frame) and the multisensor (on the door itself). When the door opens, the multisensor is moved away from the magnet and voila - the door is sensed as open. This arrangement also takes advantage of the multisensor’s ability to detect vibrations (again, by using the 3-axis accelerometer) and informs me if somebody knocks on my door.

So, choose the way you use the multisensor based upon the nature of the door - most regular house doors (and drawers, etc.) are best served using the magnet, tilting garage doors (or cupboards with tilt up or tilt down doors) can use the “garage door” mode to detect whether they are horizontal or vertical and thus don’t need the magnet. A roll type garage door would probably require a setup using the magnet.

Here is my mounting of the nexus 7 for a home alarm entry panel… I rooted the phone so I could install a custom kernel. Can unlock it now with double tap (and then enter a code to unlock) without sucking the battery.

It also has qi wireless charging so I mounted the charging pad under the 4 gang outlet like others… Murphys law. when drilling through the stud next the the outlet to run the usb cable of course I hit a power line… That is the extra little panel or box I had to install after cutting into the wall there and patching the wire… Nothing ever goes as planned.

Wireless charging is working fine… and it does really heat up at all. I put the recessed outlet (replace another) so I could run the usb cable…

The alarm panel itself is custom css… All tiles are green when everything is hunky dory… the temps change a little depending on too hot or too cold… and as I said all motion and door sensors are either red if tripped or green if ok.

Ignore the dirty wall it needs a coat of paint.

Also waiting for support for smoke/co2 alarms for smart tiles to add those zones. 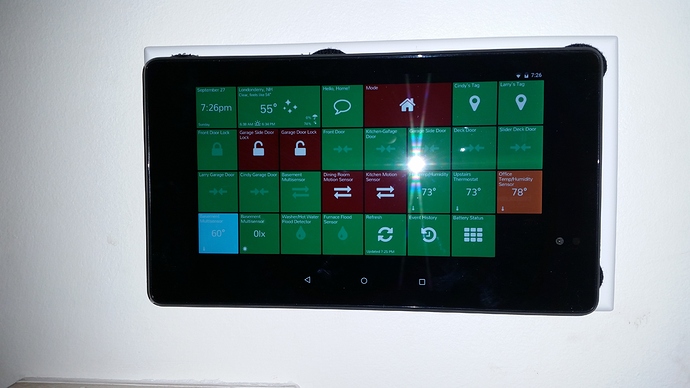 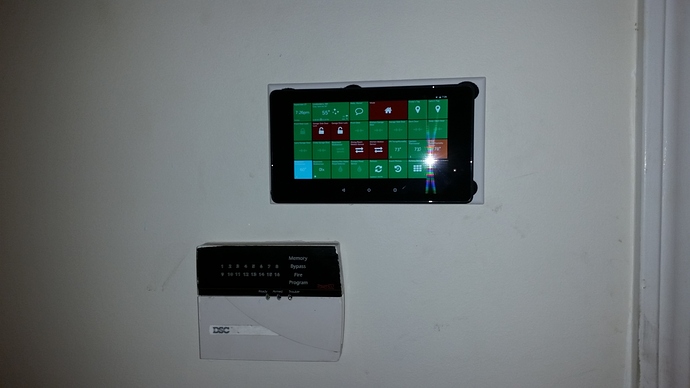 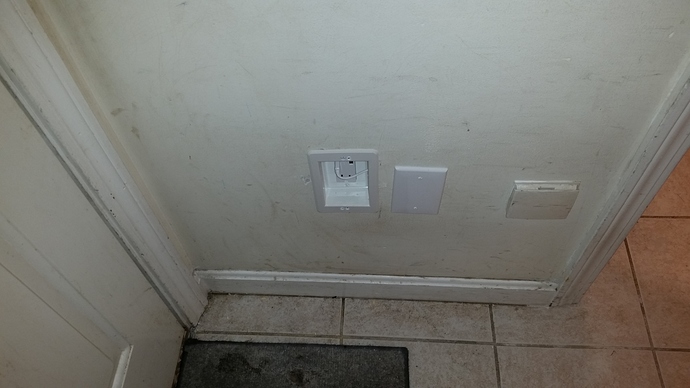 I assume that since the SmartTiles has gone closed source, there’s no way for me to update by secondary dashboards that are on 5.3.3?

Sorry but no. When the new SmartTile.click come out, you’ll be able to have multiple installed dashboards which WILL update automatically.

I saved the code long ago but didn’t update it.

@625alex will there be an option to display a dimmer / slider for lights ? Not sure if that’s on the roadmap as well

There is an option to choose your light as a dimmer or a dimmer/light bulb.

I have a whole bunch of switches set up to trigger “scenes”, which in my case are implemented with my own app. I did this so that I can distinguish them from other Routines, which I reserve for things that control state and sequences of events, and so that I can trigger them for example from the dashboard more easily, from Echo/Alexa, and the like. That said, I’d like an option to have a single tile that controls switch states via a dropdown menu of the same type as the Hello, Home / Routines tile. Would take up much less real-estate than a tile per switch. Thanks.

That said, I’d like an option to have a single tile that controls switch states via a dropdown menu of the same type as the Hello, Home / Routines tile. Would take up much less real-estate than a tile per switch. Thanks.

This is a great idea, but unfortunately very niche oriented unless your method (or similar) for implementing concepts related to “scenes” becomes prevalent or even a standard SmartThings feature.

There are several lengthy and good discussions on whether or not SmartThings should provide “first-class” objects & methods for Scene handling and I encourage you to perhaps find one thread and revive it.

SmartTiles is powerful enough to implement features that are a layer above and beyond SmartThings fundamentals, but these are necessarily a lower priority than its original mission.

I would like to see what consensus people lean towards on/in the Topics of Scenes and virtual switches, etc., as SmartThings clearly is not following traditional established practices in this regard and the lack of consensus is not helping.

The use of switches for scenes is a bit OT for Smarttiles perhaps, but being able to control switches in general without eating up more tile real-estate I don’ think is at all. Same thing that could be solved, in I think a clunkier way, with sub-dashboards (when those become possible again).

Agree re scenes more generally, certainly agree with you.