Android, and I always use just the classic app for anything home related and as i already said… I add them to rooms immediately. I only go into the new app for my bluetooth settings, but I always get stopped if I have added new items because I always have to add them to the same rooms they are already showing in the classic app… but now I’m kinda repeating what I said in my last post

Edit… prime example here. I re-added a lock to my outer garage door. Lock is named garage kevo. It’s in the classic app and in the garage room. But, when I open the new app, it tells me I have to add it to a room and won’t let me move forward until I do…
Screenshots attached

your post in the other thread that is similar to this one, goto

I’m not sure if I understand what that support page is describing. They appear to be showing steps to connect a Bluetooth device to a ST hub? But when was Bluetooth connectivity enabled?

I also read there is a rules engine/interface in the new app but I haven’t found that either.

Can anyone tell me where I can find my routines in the new app?

Classic Routines do not (yet?) exist in New App. They are replaced with Scenes or Automations (and… Light Groups)

Scenes and/or Automations are somewhat more powerful, but Smart Lighting remains the only local execution engine, and SmartThings Home Monitor (STHM) is completely distinct from Classic SHM, even though it performs a similar functionality.

What do you mean by that it won’t work properly with the classic app? First device I’ve ever seen do that. As for the new app vs. old, the classic app as far more robust automations with it. Until the new app incorporates those I don’t see how it is in any way ready to go. Honestly, I’m not even sure why they can’t get those automatons on there yet.

I wasn’t a fan of the new V3 app initially, but with the October 2019 updates it’s much better. The built in rules engine has many features the V2 classic app doesn’t have, such as delays. You can now automate unlocking a smart lock, which you couldn’t before.

And most of the new cloud to cloud integrations will work only with the V3 app because they are using capabilities from the new platform that the classic app will not support. I believe that applies to Tailwind as well.

Pretty much everything which was in “routines“ in the classic app is now in “custom automations” in the new V3 app. The main thing that is still missing is that you can’t make a widget for it.

But other than that, all of the things you’ve already mentioned can be done with custom automations, including changing modes, with some additional new features like delays.

It can be confusing when you are used to the old app’s way of doing things, but as of the October updates, I think you’ll find that most of the functionality is there. It’s just not called “routines.“

Try making a scene that changes mode to Away Day mode then try and make an automation that will change it to Away Day mode at sunrise, but only if not in Home Day or Home Night mode. Doesn’t let you

You are correct that you can’t do this with a scene in the V3 app. But you can do it with a Daisy chain custom automation.

We should first say, though, that there is a really stupid design decision in the new V3 app where if you choose mode as the “if” then you cannot have mode as the “that.”

As your example shows, there are many times when people will want to change your mode based on what the existing mode was. So it’s just dumb. Let support know you need that feature.

But there is a workaround, which is to have the mode change turn on a virtual switch, and then have the virtual switch coming on run a second automation.

I’m not in anyway saying this is a good thing. I’m just saying it is a workaround which works for now.

Pretty much everything which was in “routines“ in the classic app is now in “custom automations” in the new V3 app. The main thing that is still missing is that you can’t make a widget for it.

The scenes widget has been working just fine in v3 -

But as you mentioned above the feature that classic routines had for restrictions is not possible with custom automation. Change mode only if location mode is not in. I too ended up using virtual switches to overcome the design limitation in v3.

What’s the best way to let support know these days? That’s my main stopping point. If they’d fix that and allow you to check the mode of a thermostat in an IF, not just the state, I’d be perfectly happy to transition it all over to custom automations.

How’s Smart Home Monitor compare on the new app these days? I haven’t messed with it because I still have a little bit of SHM tied up in webCoRE, but I’m curious if it’s fairly up to par with the Classic App these days? Or does anyone actually use it in the new app?

App reviews seem to be the most direct feedback. I’ve worked around the same device/mode as a condition and action restriction somewhat. I setup the automation first, and add a scene as an action. Then once the automation is saved, I can go update the scene with the mode change.

is it a known issue that when adding things via the classic app and changing the names of the things the new app does not always syncs with the new names and shows the default names instead?
thanks

Sorry if asked before but I’m looking for some answers.
Just installed new application to my android (I’m using classic normally) and it seems to work quite okay, here’s my questions:

does that mean that they are all supported in new app?

That depends on the smartapp you have installed. For me yes, but you have apps I don’t have. Hopefully people with those apps can reply.

I noticed same, names are different in classic vs new app

I use to have this problem, but not over the last couple months. ST support may have to help with syncing, but the names will eventually update in the new app. Sometimes it took a forced restart of the new app.

I’m not 100% understanding your question. I was running both apps for a very long time without issue (see reply to your other question below). When I finally uninstalled Classic from my phone, presence was also removed and the new app pushed a message about that. I had to go back into the new app and re-enable phone presence detection. Once I did that, all my phones were available again in the new app and Classic (still running on my tablet).

is there anything that user have to change manually from classic to new application or is everything supposed to be integrated? I mean if classic is uninstalled should all for example SmartLighting rules work exactly as they worked with classic app.

SmartLighting is the same between the two mobile apps, but SHM and STHM is completely different. Make sure you read up on several of those discussions in the Community. Some custom DTH’s may need to be tweaked to work properly in the new app. If you are using any custom DTH, check with the developer or Community discussions regarding those.

which one is controlling for example SmartLighting rules if they are shown in both applications (classic and new)?

Control isn’t done by any mobile app. The ST cloud and your hub are doing that based upon what kind/types of devices you have. All the mobile apps do is add, delete, modify, etc. any of the rules you have. In other words, you can create an SL rule in one app and change it in another.

it seems like life360 that I mentioned before is not working right. From our 4 phones only one is showing up as a 360 presence sensor and it is not creating anything to log. Is this situation right now?

No experience with that smartapp, sorry!

I found Smartthings Home Monitor from new apps “smartapps”. Can I configure and use it same time when it is used by classic app? Do I get two intrusion alerts from classic and new app if someone breaks my window?

Yes you can, but I don’t recommend you do unless you like a lot of notifications and intrusion alerts to manage. So yes, you will get 2 intrusion alerts and you must use each app separately to dismiss those alerts.

is there anything that user have to change manually from classic to new application or is everything supposed to be integrated? I mean if classic is uninstalled should all for example SmartLighting rules work exactly as they worked with classic app.

I was recently able to start using the ‘new’ app. The SmartApps section needs some snagging (for example, webCoRE has ‘cancel’ on many pages where it has ‘save’ on Classic and the flow is different), but generally the only significant thing I could see is that if you use Routines you need to sort out a replacement for yourself, and Custom Automations really aren’t a one to one replacement.

It seems that Life360 presence is treated like a device in the new app. When creating automations, look at “device status” rather than “member location” to add presence checks.

You are right. They all do work now. I did not understand to check those devices like that.

Then I went and configured it from top right settings:

Added sensors like it is supposed to be added:

Hit “Done” and went back:

And once more and it still says “no sensors”…

Went back to settings and sensors are configured. Went back to main screen and this is what came up: 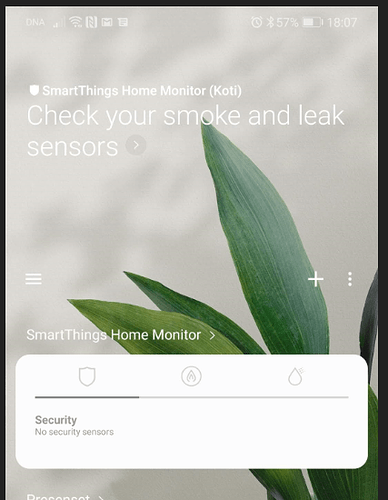 Any idea what is this?

Did you delete your SHM rules in classic first? My understanding is that you can use either SHM in the classic app, or STHM in the new app, but not both at the same time.

You can use both, but the notifications and alerts for intrusion will be annoying and confusing. I was running both for several months.