Perhaps not in this thread, but in the community.

Then, you can create a separate thread for others to chime in and share that post with them so everyone sees this is a big request. I mentioned you need to contact them because they’re not around the Community and they should have more info.

Just curious if anyone else is noticing that devices status are not updating in the app? This is most prominent in the last 24 hrs.

Example, my hub was offline but showed online in the app. When I opened the hub details then it showed offline.

I’ve had one device drop off and not rejoin, another one i had to re-pair but no longer works.

My automations are all local but seem a bit sluggish in the last day.

Yes, got some device with wrong status in app

Ditto on devices in the app showing the wrong setting or saying offline when they are not.

Hello everyone, the hotfix for the change driver tool was released some hours ago, please let me know if this works for you. I just made a test and the menu appears correctly, in my case, I had to reinstall the app (Android only) but you can check if it works by deleting the cache first (Android). Here’s the evidence: 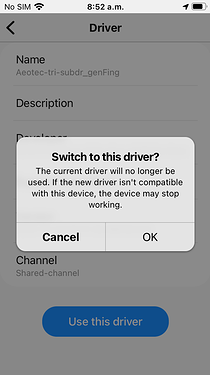 @nayelyz driver change is working on Android without uninstalling app or clearing cache.

About the issue with devices showing an “offline” status, does someone have any Sonos device Hub-Connected?
There’s an issue reported with these devices causing the Hub to restart:

I needed to change a devices Edge driver, but I couldn’t do it on Android 13 with this app version, but I was able to on the current iOS version.

Hello everyone, the hotfix for the change driver tool was released some hours ago, please let me know if this works for you. I just made a test and the menu appears correctly, in my case, I had to reinstall the app (Android only) but you can check if it works by deleting the cache first (Android).

I didn’t do anything and all of my Android devices are working. If fact, my iOS device on the latest SmartThings app is working now as well.

I have Sonos connected and had a delayed off request fail last evening but others have been fine since.

I will keep an eye on the hub but oherwise have not noticed anything out of the ordinary.

Worked for me (on Android 10 and 12 devices) after re-install. Clearing cache alone wasn’t enough. Thanks for the fix!

Deleting the cache was all i needed to do on my S20+ 5G for it to work again.

Using IOS. Had to reinstall the APP. Its now working.
Thank you for the update.

Out of interest @nayelyz, what Sonos subset were giving the issues ?

what Sonos subset were giving the issues ?

Sorry, I don’t have more info about this. What I understand from the status page is that it was an issue for some users. Not sure if it was due to the same device…

No problem, there are a few variations on a theme with Sonos, S1, S2 and all the various speakers and controlers in between

Turn OFF developer mode and driver switching works. No more blank screen. Tested with Galaxy S10. Developer mode can be turned on again and then works again. This was my experience.

Try this. Hope it works for someone else too.

A heads up to anyone that was getting the black/white screen displaying when you attempted to ‘Select a different driver’ for a device. It is now working for me. I am using an Android 12 device and my Smartthings Hub is still on Firmware Version 44.9.

Worked for me, Without re-install and without clearing the cache. This resume to work without actually doing nothing.