Smarthings Not Working at All

Here’s the error I get just trying to turn a light on or off.

"Trying to get the jsonValue for switch threw an exception: groovy.json.JsonException: Lexing failed on line: 1, column: 1, while reading ‘o’, no possible valid JSON value or punctuation could be recognized. "

Smartthings has platform issues right now. You can see the status by clicking “Platform Status” on the home community page.

Thanks. I didn’t know where to look for that!

Offline for third time in 3 weeks!

What’s going on with SmartThings? This is two outages in as many days.

So Smarthings is basically useless these days. I have a hub at a vacation home that won’t go back online after yesterday’s outage. There’s no one there to press the reset button on the hub. So much for having Smarthings monitor the place. it’s not helpful if it doesn’t work and doesn’t keep running.

Mine’s still out here, second day in a row. Some days I wonder why I decided “the cloud” should be involved with my light switches…

Offline for third time in 3 weeks!

You are lucky. Mine goes down every day. It is so bad that I don’t even keep the batteries in the hub. I got tired of removing them to reset the hub.

I’m in the club as well. My puppies will sit in the dark till i get home!

I am completely down right now. The graph.api login shows my hub as active, but no rules are being processed and I cannot execute commands from the mobile app.

I’d be pissed if I were paying for monitoring!

That’s actually one of the best ideas… I should do the same. It would at least save a step.

I picked up a power plug that recycles the Hub every night after 2:00 am (pick best time for you) and things like this will not be a problem if they should occur again while away.

Do you have a link to your power plug or name/brand? Looks like I need to invest in something similar.

Anyone have recommendations for something that I can use to remotely cycle on and off through my vpn access?

Check out EzOutlet from amazon. I use it for at work to power cycle some network gadgets.

I looked at that one, and then got upsold to the two-plug switch, and then saw the 8+2 plug one and decided it would be amazing to be able to auto-reboot the cable modem, the wifi router, the STv2 hub, and the VPN server separately based on pinging various local and WAN addresses (for twice as much as the single-plug- gah), and it looks like you can program simple scripts to bring the modem back up first, followed by the router, followed by the other network devices. Heck, with that many ports, I can even control the ethernet switch.

Arrives on Tuesday so hopefully we’ll have minimal ST-cloud outages between now and then. I’ve almost never had to reboot my router or modem, and the VPN has been pretty rock-solid too, but it always seems to happen when you’re hundreds of miles away, and with two hard-reboots required on the STv2 hub in the past two days and the xAF dropping, I don’t want to take any more chances… 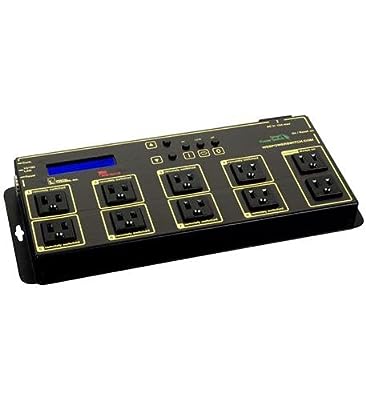 When I chatted with support yesterday they said ST pushed out a minor update and “some” hubs didn’t reboot properly/completely. They also didn’t expect it to happen again. So much for that. I assume it was the same issue today. I told them the same thing a few of you have said that basically the hub is useless if this keeps happening. What am I suppose to do if I were traveling for work or vacation? They should let you choose when to update, or at least have the option delay it if they can’t make it reliable.

Mine has been out for the last couple of hours. 3 blue lights. Says it’s off line but I’m posting this from my home internet. Just pulled the batteries so it would turn off. Came back on and still 3 blue lights