Click the station IDThis will give you the station’s data. Scroll down to make sure it is reporting Solar Radiation.

Well, I have looked at nearly a dozen and none seem to show solar raditation, am I missing something? 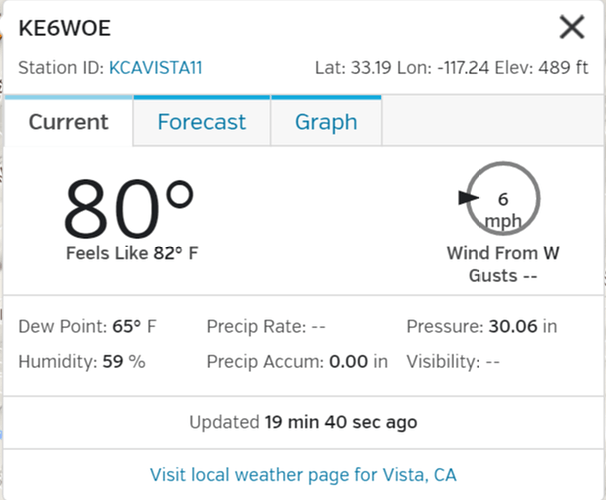 OK, found it, need to enter into the station again.

I now see the solar label but not all of them have a value, found one that did

Can anyone confirm if the obs.precip_1hr_metric** is working via this and the getWeatherFeature() API?

precip_1hr_metric did log from SmartThings to Google Sheets over the weekend. If the data is zero it must not send it. Since this is updating shortly after the hour, I’m thinking it will always miss the weather underground data. Also added the precip_today_metric which shouldn’t reset until midnight.

The DTH reports “feelsLike” and I see a valid number in the tile, but I can’t figure out how to use it in a SmartApp, e.g. as input to Rule Machine or CoRE. I’ve been able to load it into a variable, but it always shows “0”. Any suggestions how to get this would be appreciated.

Is it containing words followed by the number? Perhaps I can modify CoRE’s casting function to “extract” all digits from the string and convert them to a number?

Thanks, Adrian. I used a test piston to save the custom attribute “feelsLike” to a string variable and it is only a two-character string, e.g. “83”.

I am trying to use the Smart Weather station tile app for Lux. Find that Lux doesn’t update very often and in the device “recent” log, lux is almost never listed, therefore anything I do in CoRE is not reliable.

Is there a way to get the weather tile to update the lux, even an auto refresh using CoRE doesn’t seem to help

I have Aeon multi sensors outside that can read illuminance. Buy one and install it outside… Fixes the problem. ST has one too, the multi sensor I think.

Good to know, thanks Adrian

A lot of the ST sensors are undermarketed. They can do a lot more than ST or at least their names claim they do. Contact sensors can measure three axis, vibration, contact and temperature. Really, who could tell… The SmartOutlet is technically a relay switch but can also measure power and temperature. Again, who knew…

Ok, how do you pull that info?

[quote=“Toy4Rick, post:131, topic:2710”]
I am trying to use the Smart Weather station tile app for Lux. Find that Lux doesn’t update very often and in the device “recent” log, lux is almost never listed, therefore anything I do in CoRE is not reliable.
[/quote]Just to note that the lux value from Smart Weather is totally artificial. See the code starting at line 308 in estimateLux: https://github.com/SmartThingsCommunity/SmartThingsPublic/blob/master/devicetypes/smartthings/smartweather-station-tile.src/smartweather-station-tile.groovy

lol that whole setup is so random…

Totally explains why I get light, then other times nothing… and here I thought is was me not knowing how to setup the CoRE Piston

The aeotec multisensor I use reports lux just fine, if that helps.

Well, I wasn’t quite sure how that worked but now that I do I’m not that crazy about it (seems worthless). I have a BloomSky at my house and another about 2.5 or 3 miles away so I think I’ll just use them and maybe shit can the weather tile.

Thanks for the info.

Perhaps I can modify CoRE’s casting function to “extract” all digits from the string and convert them to a number?

Adrian - I’ve been playing with trying to get the two-or-three-digit string into an arithmetically usable decimal variable. I actually thought I had it last night, but now I can’t reproduce my admittedly hazy memory of success.

I have a variable with a string that is exactly two characters: “96” (yes, I’m in Florida, too). This comes from “Save attribute of feelsLike from WeatherUnderground”. I’ve tried to directly set a decimal variable to that attribute, but it never works - just a zero. What I thought worked was setting the string variable, which is right, and then setting a decimal variable to the string variable.

So, my question is: Is any of this supposed to work?

If not, do you foresee ever adding some string formatting/conversion to CoRE?

Any chance of getting a true LUX reading incorporated into the weather tile? I would think the only way this would work is if you put in the name of a weather station that reports LUX. Right now I am pulling data from my Davis vantage which has solar data.