Smart Remote by Sevenhugs. Control "Anything"?

Sevenhugs Smart Remote — Control it all with one remote

Meet Smart Remote—the world’s most advanced and easiest to use universal remote control. Unify control of your entertainment and smart home devices.

Did a search for sevenhugs but nothing came up, so I figured Id share.

Currently it is just vaporware

Yeah, I know, but I wanted to bring it to light in this community. I cant find data on what it talks across. The device integration is slim right now, but hopefully it will expand.

I know the Echo is easier to use than a remote, but the idea behind this product is intriguing.

The 2016 Samsung smart TV remote isn’t as pretty as the vaporware from seven hugs, but it’s more likely to come to market and it’s trying to solve a lot of the same problems. (Although weirdly the author of the following article doesn’t appear to have ever heard of Logitech Harmony.)

Anyway, the main point is it is going to figure out what devices you have based on what is connected to the TV and then automatically program the remote as well as switch it to the correct device. No activity concept like harmony.

It’s interesting, and I expect it will have a lot of fans. It will also be interesting to see if the new smart home features tie into it at all, although they might not. 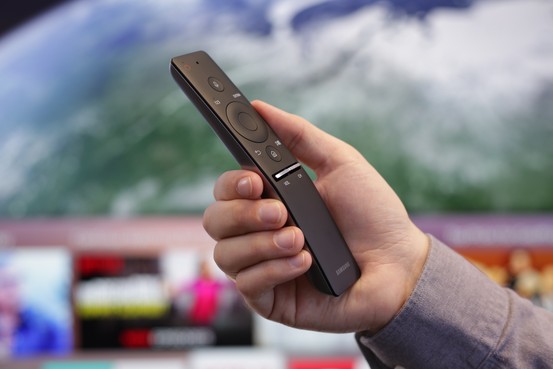 Review: Geoffrey A. Fowler tests Samsung’s 2016 TVs, which have one smart clicker to control all our video boxes, players, streamers and apps

Did a search for sevenhugs but nothing came up

TechCrunch covered SevenHugs five month ago. It’s designed in France and is probably full of cheese.

Point and control. That's the basis of the SevenHugs Smart Remote. Instead of selecting, say, a connected light bulb on a menu in the remote, a user simply points the remote at the light to control it. Want to control a Sonos speaker? Point the...

I am really curious though how it hooks up to IoT home. The info is still pretty vague on it.

No certifications yet that I’ve seen. The initial model is only promised to work with Sonos, nest, and Phillips hue. And no way to know whether they’ll hit that target.

Universal remotes aren't just for your TV and stereo any more -- this one can control your lights, heating and more.

I also don’t see any indication that they’ve solved the “what is a room” problem that protocols like Wi-Fi which can go through walls run into. That is, triangulating with Wi-Fi devices gets expensive because since Wi-Fi goes through walls, you need more devices to define a room or the remote thinks that you want to control something in the kitchen when you really meant something in the hallway next to it. Or the bedroom one floor up.

So I think everything that’s already been said in this thread still applies. And until this thing gets to market, there’s no real way to tell what it will do.

Hey, everyone! We’re excited to see members of the SmartThings community intrigued by our device. You’ll find all kinds of information on our updated compatibility list (over 25,00 devices), our 3D room mapping, and features on our Kickstarter page.

We know we’re new and you all will certainly have questions. We’d love to answer them and chat with people who just “get” Smart Home devices. Please send us your questions or stop by to chat at contact@sevenhugs.com.

I couldn’t help myself and pulled the trigger. The kickstarter live demo was pretty impressive. Excited to see all the integrations we can setup with custom screen developer SDK.

According to their website:
Smart Remote is compatible with Smartthings, Insteon, Wink, Logitech.

Pre-release promises. We’ll see what actually gets delivered. I can think of at least three recent devices, including the nucleus intercom, which said they would have SmartThings compatibility and then didn’t.

They appear to be unaware that Insteon doesn’t use either Z wave or zigbee, but rather uses its own proprietary protocol. That’s a good sign that these FAQs were written by marketing people rather than engineers.

So if it arrives with SmartThings integration, that would be great, but, like I said, on this one I’m waiting until it’s actually available for Amazon delivery before I evaluate it.

I understand the kickstarter skepticism. However the live demo did show them controlling a hue (unless they went out of their way to lie about it). So they appear to have that integration already. Also probably doesn’t hurt that @slagle posted during their kickstarter that they should chat and appears to have backed as well

. So I’m guessing Smart Things integration will come quickly and if not well there’s always IFTTT to tie them together.

If it launches with IFTTT. Just sayin’…

I actually bought a device from sevenhugs, their hugone sleep sensor, because it said it had IFTTT implementation. And the channel/service actions looked good.

But it turned out there was an undocumented “feature” and the device didn’t actually transmit until certain specific events had occurred. Which meant if you woke up before the time you had told it in advance that you would wake up, it didn’t transmit that and so the IFTTT channel didn’t trigger. There was no way to tell from the marketing materials that that was how it worked, and in fact their support didn’t seem to know the first time I asked.

So I ended up returning it as it didn’t match my use case. Judging from the Amazon reviews, I’m not the only person who got tripped up by that.

After that experience, I don’t feel confident that this specific company’s marketing matches their engineering.

Fair enough and that’s good Company specific feedback to provide outside of just the standard Kickstarter isn’t real warnings. I was pretty impressed by what they already had working to think they should be able to substantially deliver. Hard to see how they could screw up the “when to trigger” portion of IFTTT for a remote (aka trigger when you push the button)… However I can understand the frustration in your case of waking up before the pre-scheduled ifttt triggering alarm. Ultimately it is a risk vs reward thing since depending on when you had the chance to get in, they did have some fairly substantial discounts off their planned retail. Is its current pre-order price enough of a discount to take on the risk of it not coming to be or being materially different than advertised? Hard to say…At the early kickstarter levels, I felt it was. I’ll be happy to report back to the community later with how that decision pans out, good or bad.

This device is finally shipping at a cost of around $250. It has the same integration protocols as a Harmony remote does: infrared, Bluetooth, and some specific Wi-Fi like Phillips hue.

Its distinguishing feature is that it has three sensors you stick on the wall and then depending on what you were pointing the remote at, the glossy display screen changes the available controls. Which is clever, but I don’t know if it’s enough to justify the price point.

Teaching a young kid to use it would be difficult because of the ever-changing display.

These pictures are all the same device in the same room, the display changes based on what you are pointing at. Which will be cool to show your friends, but may be annoying in every day use.

Sevenhugs U ditches the sensors and slashes $100 off the X version (original one). Still think at $200 for a remote is too much, but sure the remote is appealing just for spite against Logitech, if nothing else. Only If they were offering 5ghz connection… still

The new Smart Remote U is $100 less than the original, but isn’t quite as fancy

“we are currently discussing with Samsung to get a validation to implement this integration [SmartThings]. We’ll make sure to update you as soon as we have more information from them.”

First impression on 7hugs U, solid Harmony Elite contender IF you don’t mind the absence of physical buttons. The small form may pose a problem, but the software is much more functional and responsive than Harmony ever was.