Is anyone else having issues getting these plugs working with Christmas lights?

I’ve tried the SmartThings Plug, and that just doesn’t seem to like them at all. As for the Wemo Socket, im also 100% sure that last year I had this working with them, but I can’t get them working this year.

The lights are all powered by a 12V adapter, so I’m thinking that this is part of the problem, but i’m not 100% sure.

I’m sure that’s very frustrating – – What exact problems are you seeing?

Many people use the on/off plugs with Christmas lights, you can find lots of examples of that on the quick browse list for holidays in the project report section:

A switch with dimmer capability probably won’t work with Christmas lights as the draw is not high enough.

Other than that, the most commonly reported problems in the past has been the lights not turning all the way off when the switch was turned off.

Hi everyone, i’m hoping some of you electrical experts could chime in with your suggestions and advice. To give you some background info, I purchased a Leviton DZS15 light switch a few days ago to replace the switch that controls my exterior porch soffit outlet. This outlet is intended to wire Christmas lights. I figured switching this to a smart switch would be a great solution as i could setup a schedule through smartthings to turn my Christmas lights on and off. I wired it up last night and got it all paired up with smartthings and it works great (scheduled on/off works awesome). I did notice though this evening when i got home and before the lights were scheduled to turn on that my christmas lights appeared to be on but very dim. I’d say 10-20% of the original power of when it actua…

That seems to just depend on the model of switch, with some switches having a problem and some not.

I have a couple of WeMo and Aeotec devices running my lights for a while now with no problems.

I’m using Iris wall warts, Aeon ZW appliance modules, GE outdoor ZW modules and GE ZW dimmable wall warts, they all work fine. The only issue is 1 of my LED sets ( Taotonic controller ) does not come back on when power is restored. So after ST turns the GE outdoor controlling it on, I have to use Harmony ( or it’s own remote ) to turn the actual lights back on .

My WeMo switch is now working great with the lights.

It seems the SmartThings Plug doesn’t work with them though. I suspect there is some sort of power incompatibility.

I have the plug that came with the ST kit as well as two iris outlet smart plugs. EAch are connected to a christmas tree and each work perfectly. I have them set to come on at 6PM and off at 10PM. But I also have it so you can tell Google Home to turn on/off any one of them individually or as a group.

You saying 12V adapter makes me wonder “How far away is it?”

The lights are all powered by a 12V adapter, so I’m thinking that this is part of the problem, but i’m not 100% sure.

Not sure what you mean? It’s plugged into the socket 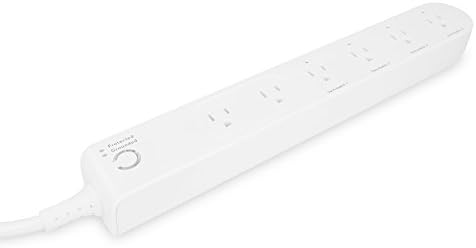 The Aeon labs smart powerstrip is a high-quality Z-Wave power board which can report immediate wattage consumption or kWh energy usage over a period of time. The powerstrip can be controlled by other ...


It works very well for on/off for my LED lights on the tree.

What is the exact problem you are experiencing?? I am happy to assist and so you know currently have 28 of the Iris and SmartThings SmartPlugs deployed for Christmas lights with no compatibility issues. I have plugs connected to LEDs using just a couple watts. These are relay devices and should be compatible with any 120v Christmas light set.

What brand lights are you using?

Using the Lowes Iris smart plugs to turn on my Christmas lights and then off later in the night. Been running them for over a week with no problems.

Haven’t got a clue! Just whatever was in the shop.

I’m from the UK, but I’ve tried it with 2 different types of 12V lights now and neither of them work with the ST Plug. Both work fine with the Wemo Plug

I missed this was a UK mains. Have you considered trying a US mains and plug? There are widely available in the US. (I joke!)

I see you mentioned using an adapter… are you using a US ST Plug on an adapter to UK mains?

Yep. I’ve had an lamp with an E14 LED plugged into it working for months now, no issues.

I am using the UK ST Plug, with the lights plugged directly into them. Here is the setup:

I wonder if there’s some minimum activation power draw required. I’m purely speculating, and I actually doubt that hypothesis, But I’m out of ideas. Very strange!

I thought I read something like this last year to be honest, but I can’t find anything on it now…

Output is at 31V and uses 9W (a guess from it’s name). Yes, if the outlet monitors power usage then it probably has a limit it won’t work below.

With X10 we used to plug a light bulb in parallel.

I am using this smart plug. Does anyone have any issues with Christmas lights blowing more frequently than expected? I am blowing entire strings of lights.