If i turn the offsets off, I only get one ON/OFF command sent for the triggers. 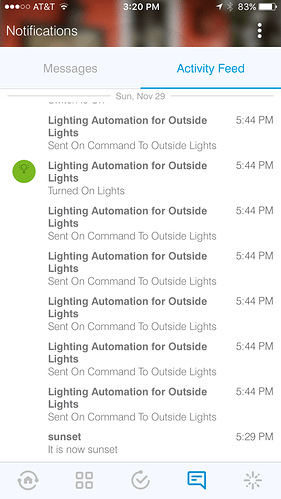 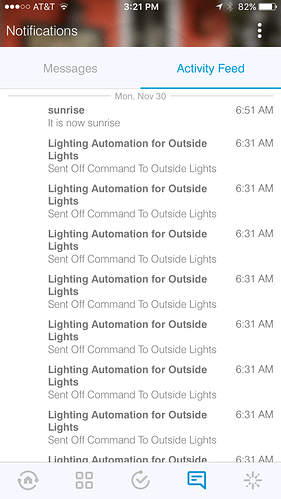 This should be reported to support. support@smarthtings.com

I have what I believe is a simple automation task to turn my patio lights on and off at sunset +20 minutes and sunrise - 20 minutes. The action seems to work as expected, but the activity feed gets flooded with entries when the sunset or sunrise action occurs (see screenshot). Any idea what might cause this? [image] Did I do something wrong with the automation rule (see screenshot (crap, only one image is allowed for new users, I’ll try to add a reply with the rule setup))?

Thanks, it looks like the exact same problem I’m having. Will give support a try.

I’m having the same issue, and have a ticket into support as well.

As you had described, my issue currently seems to be with two switches triggered at sunset with a +/- offset as well. 20-40 commands sent.

Performance is still as intended, and lights turn on when they’re supposed to, so it’s probably a low priority.

so it’s probably a low priority

priority is set by how many users report the issue, if you would like it resolved sooner then “a matter of weeks” then i would report it to support as well.

I see it too. Will report as well.

Does anyone have a workaround? I like to check my activity feed regularly just to check on how things are going, and this really corrupts the view.

I agree it does. ST staff ran a script on mine, but it did not fix the issue. Continues to repeat the commands that are triggered at sunrise/set with time offsets.

I’m also having the same issue but it also has repeated activity messages for routines too. This may not be limited to just the smart lighting app. I sent an email to support and have a ticket open. Hopefully we see some movement on this because its annoying to see all that noise in the feed.

Edit: Just got a response from support. They are escalating it to the engineers, ill post an update when I hear something.

Same here. Is this still an issue for others?

yup, same here… and seems to be getting worse .
I’ll put in a ticket as well