We replaced our furnace two years ago and looked into installing zones. We decided not to because it was going to add about $4,000 to the overall cost (we have an old house and it would require quite a bit of duct alterations). I can do the same things with these and even including the couple extra temp sensor I need it will be less than $1,000.

If @urman gets a device type for these, I am definitely buying a few for testing.

I am on board to try econet controls out too if @urman gets a device type for that…I have some trouble rooms.

I have talked with EcoVents at length, and their system will not be even in production until late next summer…and they didn’t promise Zwave integration in the end, which seems odd.

K, I agree. Especially when you consider the components that should be necessary to put the solution together. I have the $7 vent in hand now, BTW. Should have a chance to dissect it tomorrow. Will post some info and pix here.

Okay, dissecting the $6.86 Vent-Miser was a snap. Literally. Everything is just snapped in place.

And once it’s disassembled, the good news continues. If ever there was a product begging to be the base of a smart-hack, this is IT. First, as you can see in the Amazon product listing, the controller is just a little plastic box that snaps in and out. (Pretty clever design on several fronts, since programming as it exists right now wouldn’t be pleasant standing on a ladder with your hands over your head.)

Once you flip the unit over, a cover snaps off and you see that the little white box snaps into a receptacle that with two leads that feed the motor. The motor operates the louvers by a simple rack-and-pinion design. 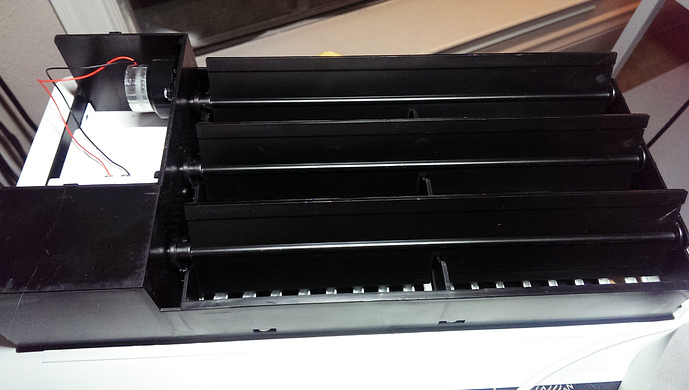 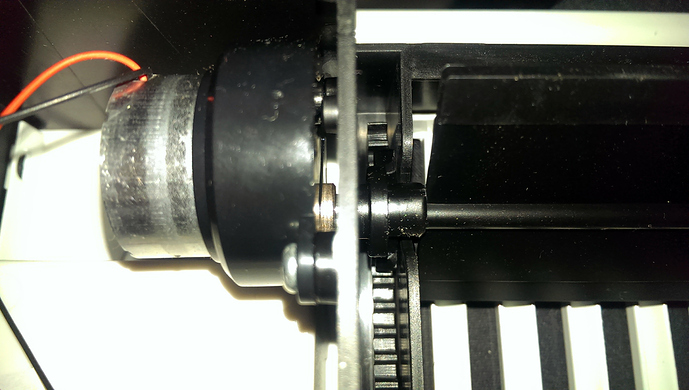 So, for the more HA- and electronically gifted among us, what’s needed for this hack?

Thanks for the write up. Any markings on the motor? I presume it’s a reversible DC motor, but what voltage? Also, could you open up the controller enclosure to see if there’re any reusable parts, particularly motor driver?

If not, you can get a cheap motor driver board on eBay:

Shop from the world's largest selection and best deals for Unbranded/Generic Industrial Motor Drives & Controls. Shop with confidence on eBay!

Then you’d need to hook it up to a controller, e.g. an Arduino + ThingShield or a WiFi module.

The back of the enclosure is embossed with SPRINGFIELD PRECISE TEMP. It’s powered by 2 AAAs.

Nothing on the motor: 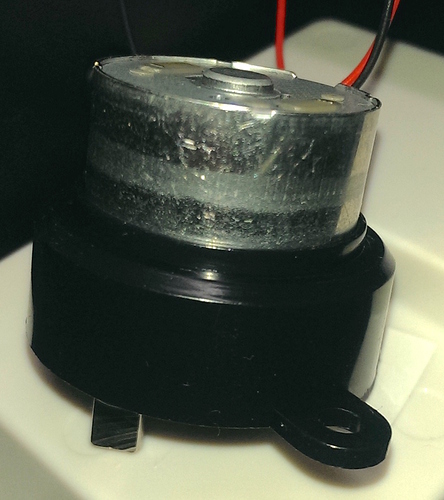 The controller contains one board: 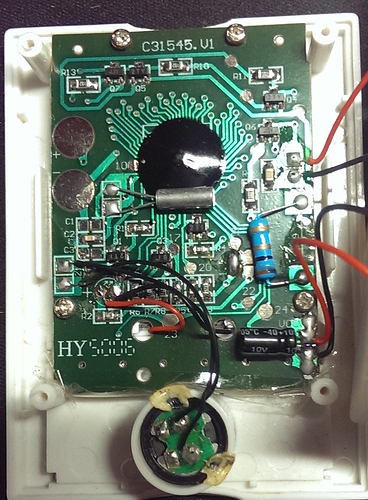 I see… Shouldn’t expect more from a $7 device, I guess.

I assume it’s a 3V motor. The driver board I mentioned should do it then.

Looks like a lot of people are very interested in having something like this. I just want to point out a few things that everyone who obstructs ducts should be aware of.

A heating or air-conditioning system is built according to a balance. The number of ducts is roughly linked to the volume of air that your blower is designed to output. If you close off too many vents, you will run into a number of problems, from poor heating/ac performance, to damage to your furnace, or damage to your home.

If you restrict the airflow of a forced-air a/c system, you will freeze up the coils. A/C NEEDS air to run, if you starve it of enough airflow you will end up with a shut-down system, or a poorly-performing system. Also you will shorten the life of the entire system.

Yes you can close off a vent or two in an unused room. But you should leave most of your vents open so your system can function properly. I know that automated vent controls seem really neat from a HA perspective, but this is an area where I think tinkering will cause you real issues down the road.

If you are skeptical of what I am saying here, you are free to do your own research. You will find both opinions, but the overwhelming majority agree that you should keep as many vents as possible open.

I always wondered about this. However, logically there must be a way to resolve it. If you restrict a room, it should be the same as sizing a smaller house. Or can’t you close one vent and open another? Do you also need to restrict the return vents? Does a variable speed fan help?

I would think home automation should be the tool to give you more effective zone heating than just the HVAC.

@chrisf, Appreciate your concerns. I don’t see a problem here since all we’re talking about is replacing manual air registers with motorized ones. It does not make situation any worse. In fact, by automating air vents you can ensure that certain number of vents remains open to provide adequate air flow.

What happened to the “Projects” part of the website? I know there was a project there to gut out a vent miser and put in a shield and such. I am pretty sure the project was completed as well.

When we eventually get to the point where these work with ST, we should endeavor to have a “safety” within the controls to prevent too many vents from closing. Perhaps it would be a percentage of the total number of vents? Basically, setup a threshold that the system will not go past.

I can see these, however, being quite useful even within the confines of safely operating the system. For example, throughout the day different rooms will be in direct sunlight. So, the vents that are open or closed during each “HVAC session” will change. Also, certain rooms will close when then reach temperature to more quickly cool/heat the rooms that are slower for whatever reason.

I also think having an option to “reset” after the HVAC session where all vents return to open status would be helpful.

Personally, I see this setup used more to efficiently heat/cool a home more quickly by using local temperature sensing. Although this could be used for occupancy as well, that may not be optimal based on the layout of your house.

What happened to the “Projects” part of the website

Should ask @Ben, “The Big Kahuna”. He occasionally resurrects hand-picked projects from the purgatory.

[quote=“beckwith, post:26, topic:4913, full:true”]I always wondered about this. However, logically there must be a way to resolve it. If you restrict a room, it should be the same as sizing a smaller house. Or can’t you close one vent and open another? Do you also need to restrict the return vents? Does a variable speed fan help?

I would think home automation should be the tool to give you more effective zone heating than just the HVAC.
[/quote]
The problem you potentially run into is that the furnace/AC installed in your home is designed with a certain volume in mind. If you “reduce the size of your house” by restricting air flow, ideally you should use a smaller furnace/AC unit. As “the other Chris” said, too big of a unit for your house will cause inefficiencies and potentially damage.

The fan speed isn’t really the issue… in fact smaller/slower fan would be worse. The assumption is that x-volume of air is flowing over the coils or heat source. When there isn’t sufficient air to do this, that’s when the problem occurs.

I guess my point is the HVAC needs should be redesigned with this in mind. Presently HVAC is designed with a static house. Your house doesn’t grow and shrink. However, if you add onto your house you have to have your HVAC resized. Zone areas are not practical because you have to manually open and close vents AND retune burner/compressor/blower size.

However, with home automation, we have the data points that allow us to make this automatic. We need to replace our old static HVAC with one with a variable burner, compressor and fan.

My geothermal HVAC has both a variable compressor and blower but I’m not sure how to change these these settings real time.

Back to my point…

To effectively use controllable vents may best be accomplished if you get a HVAC that supports it.

I guess my point is the HVAC needs should be redesigned with this in mind. Presently HVAC is designed with a static house.
…
To effectively use controllable vents may best be accomplished if you get a HVAC that supports it.

I agree with everything here. My sister’s home uses hot water radiators… I wonder if that would be more customizable?

Also because of this there are no HVAC air vents so she’s got two separate A/C units… one for the upper floor and one for the main floor and basement. I was always a little jealous of that because that’s kinda idea for AC… my upstairs if always warmer than the other floors because hot air rises. I’ve closed off a few of the lower level air vents but don’t want to do this too much because of the negative side effects discussed.

my upstairs if always warmer than the other floors because hot air rises.

It’s a common problem with a forced air HVAC. My solution is to turn on the fan periodically when the AC or the furnace is off (circulate mode) to rebalance the temperature. And this is were controllable vents would be really handy because it would let you redirect air flow dynamically.

Clever. That is using a dumb HVAC and making it smart without the expense of a HVAC upgrade.

It’s a common problem with a forced air HVAC. My solution is to turn on the fan periodically when the AC or the furnace is off (circulate mode) to rebalance the temperature. And this is were controllable vents would be really handy because it would let you redirect air flow dynamically.

OOHHH… now that is a GREAT idea. Do you have some sort of app setup to do this? I hadn’t even thought of doing that but it makes a lot of sense.

And you are 100% right… controllable vent here would be great help. Close the vents on the main floor and then “push air” just between the top and bottom floors. Or even close just the exit vents in the lower level, opening just the return vents and then the out vents on the upper floor.

Do you have some sort of app setup to do this?

Currently, I just use my Filtrete 3M-50 SmartThings device to manually turn the fan to “Circulate”, but the goal is to automate it of course. It can be as simple as scheduling the fan to circulate from 9 pm to 10 pm, after my AC turns off, for example.