Smappee (and in particular, Solar version)

Has anyone done much with the Smappee energy monitor? The kit seems good, and (at least her in the UK), it’s a standard ST device, available from the ‘add things’ screen.

The thing is, although it returns separate values for mains power usage and solar generation, all of the existing ‘power’ apps only seem expect power monitors to provide a single value.

But I don’t want to reinvent the wheel, so if someone has already done the donkey work…

In the US, at least, some people use the IFTTT indirect integration, which does distinguish between solar power and other power since it’s using the smappee channel. I don’t know if it works for the UK.

Thanks JD. I guess that would work but it would be nice to have something more direct. I was thinking about switching loads to mop up the solar export, but IFTTT is possibly going to add too much delay to make this worthwhile.

I had a look at the documentation for the Smappee API, it would need to be a cloud-to-cloud implementation with the appropriate call being polled to get current consumption data etc. Not impossible but I don’t have a Smappee

The issue would still be delay though

Edit: looks like someone tried last year… not sure if enough has changed for this to work.

Hello, I was wondering if anyone has a sample piece of groovy code that will handle picking up a token using the password version of grant_type. This is the API documentation https://smappee.atlassian.net/wiki/display/DEVAPI/Client+Credentials I am trying to integrate Smappee with Smartthings, which I would otherwise have done through IFTTT, since Smappee has an IFTTT channel, but IFTTT does not work for us UK users. For those who don’t know Smappee, it is an energy monitor which uses a couple of clamp sensors to report total power load and solar production. It is a very powerful system as it can detect the operation of individual devices purely from their electrical signature (e.g. it knows when the kettle is switched on and off without having a discrete sensor). It also logs total ene…

The baked-in ST device handler already gets the Solar value. It’s just that none of the existing power-monitoring apps seem able to use it - they all assume that an energy monitor returns a single value. 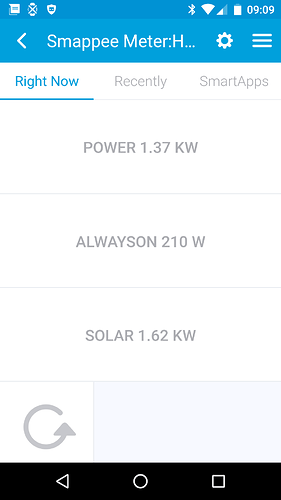 Oh I see, I should have checked if there was a solution already

Actually, it looks like the official integration only updates every five minutes or so, so not really good enough to copy with minimising solar export. I’ll use Smappee’s own Comfort Plugs instead.

I know @djtucker mentioned that he had a device type to interrogate Smappee locally, so might be a better option. I don’t know if he released the code or not though.

I use Smappee and its brilliant. http://www.smappee.com/uk/energy-monitor It has the extra features of being able to identify your major power-consuming appliances individually so you can see where your electricity pounds are being spent. Also it has a built-in 433Mhz controller so it makes a very cost-effective way of on/off controlling of various appliances up to 1kW using compatible 433MHz plugs (around £10-15 a time, rather than the £30+ of a WeMo or the £40+ of SmartThings Outlet) … just bear in mind that it cannot directly monitor the state of the switches, but it can tell you the power being drawn if it has a high enough wattage to be detected via the current clamp. I have written a DTH that allows me to poll the Smappee power consumption direct from ST via my LAN, and it h…

The link here gives some indication about how to query the device over the LAN:

Hi Robby, I use local API pooling which gives me almost real time readings. However, I was remarked here that I should not pool it more frequently than every 5s and that in fact the local API is not intended to be used. Therefore, I haven’t publicised it. Anyway, if you want try it on your own rick then you can pool http://smappeeXXXXXXXX.local/gateway/apipublic/reportInstantaneousValues
with JSON path $.report and get real time power, voltage, current, etc. The correct smappeeXXXXXX.local address you can find in your app UI or use mdns-scan

Except when he says “pooling” he means “polling”.

It would mean ultimately that the data can be queried a lot more often than using the cloud API. Not realtime, but close.

It’s a shame that mDNS/DNS-SD or Bonjour is not currently supported else it’d make creating a Connect SmartApp much easlier. Instead the address details for the device on the LAN would need to be entered manually.

I believe this is what @PailOckenden is already using but requires more frequent updates of power usage than 5 minutes as it uses the cloud integration, not local.

yup helps if i actually read the thread

However as others have mentioned, it is of little use.

I’m going to try the official plugs. And also see whether any of my other 433MHz plugs will pair with it.

see whether any of my other 433MHz plugs will pair with it.

Nor do homeeasy plugs which look almost exactly the same. Shame as I have quite a few of those from the past.

BTW, if anyone needs a range extender for the comfort plugs, this is the jobbie: https://www.amazon.co.uk/gp/product/B0146HCXVQ/

Found this, which expands on the link @Kriskit posted above:

Just purchased a smappee. Just wondering if you can add smart plugs through the official app within smart things and make them available as a device in “Things”?

Would be useless if they only updated every 5 minutes though.

I don’t think there’s any way to get the comfort plugs working with SmartThings. In fact, given the slow polling I’m not really sure how useful the Smappee / SmartThings integration is at all. It would be nice to fire off events in real time (e.g. If a certain appliance is detected, or if solar export goes above zero). But the delays make stuff like that pretty useless.